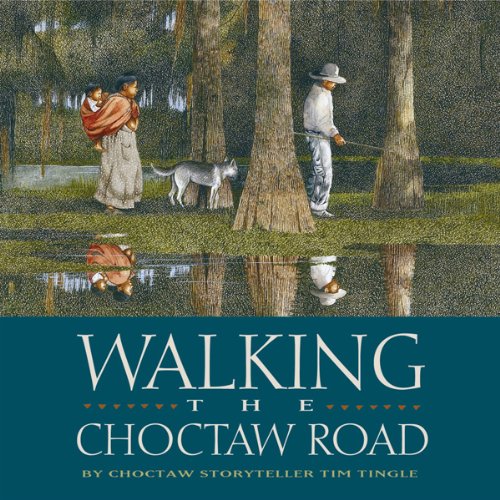 In Walking the Choctaw Road, Tim Tingle reaches far back into tribal memory to offer a deeply personal collection of stories woven from the supernatural, mythical, historical, and oral accounts of Choctaw people living today.

“Oklahoma” comes from the Choctaw word “Okla Homma,” meaning “Red People”. In this, his first collection of stories, acclaimed storyteller and folklorist Tim Tingle tells the stories of his people, the Choctaw People, the Okla Homma. For years Tim has collected the stories of the old folks, weaving those tales into his own stories, mixing traditional lore with stories from everyday life. Thus, Walking the Choctaw Road has a mixture of contemporary stories of Choctaw people living their lives right now, historical accounts passed down from generation to generation, and stories arising from beliefs and myths.

In one of the 11 stories, Tim tells how audiences are always wanting to hear stories about the Indian Wars, so he tells about his own Indian War, which he calls “Archie’s War”, the 20-year war between his father and himself, which ended in hard-won respect and love for them both. In another, he lets a five-year-old boy tell us a magical, tragic tale about “The Trail of Tears”, when the U.S. government forcibly removed the Choctaw people from their homeland to Oklahoma. And in another, a Choctaw preacher tells about his grandmother, a healing woman, who has a beyond-death relationship with her protector dog, Shob.

" Walking the Choctaw Road will stay with you and lend you some of its strength. Delivered in Tim's quiet, down-home Indian voice, they're the sort of lesson stories that stick to you like a burr. Cross the river with these stories—they'll give you safe passage." (Joseph Bruchac, author of Tell Me a Tale)
" Walking the Choctaw Road is a delightfully presented, inherently entertaining and thoughtfully informative collection of original tales drawn from personal, mythical, and oral accounts." ( The Midwest Book Review)
"A true talespinner celebrates his heritage with 11 absorbing yarns drawn, recombined and retold from oral sources. Tales of shape-shifters and healing magic share space with stories about tragedy and miracles along the Trail of Tears and about prejudice, friendship, and incidents that illuminate traditional Choctaw values and cultural practices." ( Booklist)

This is one of the best books I've downloaded from audible. I downloaded this because I wanted to learn more about Choctaw culture, and got so much more. I have listened to the whole thing twice and was left in awe in each time. If you have the book, it is still worth it to purchase this audible version. Tim Tingle the author is a masterful storyteller and being able to hear his inflections and pauses and have him voice the Choctaw chants, brings so much feeling and life to the experience. The stories cover a varied scope of time and place and yet they all seem to communicate a message that is uniquely Choctaw.

Where does Walking the Choctaw Road rank among all the audiobooks you’ve listened to so far?

What was one of the most memorable moments of Walking the Choctaw Road?

the passage on the trail of tears. "dont look at the bloody footprints behind you" don't remember the whole quote exactly sadly but the idea sticks with me.

Which character – as performed by Tim Tingle – was your favorite?