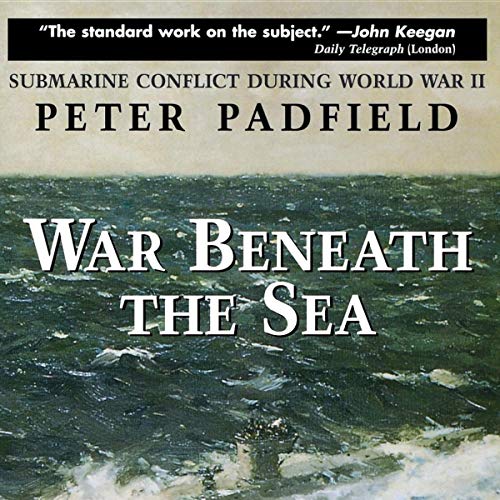 Sweeping from the frigid waters of the North Atlantic to the steaming South Pacific, this riveting chronicle of submarine warfare is the first to cover all the major submarine campaigns of the war, describing, in detail, the operations of the British, American, Japanese, Italian, and German submarine and anti-submarine forces.

Beginning with a vivid re-creation of the sinking of the passenger liner Athenia by a German U-boat in September 1939, critically acclaimed military historian Peter Padfield's compelling narrative casts an unflinching eye on the devastating consequences of maritime warfare. The often harrowing encounters unfold with urgency and power, balanced by his keen sense of objectivity and perspective.

Exploring the full spectrum of the submarine and anti-submarine warfare experience, this brilliantly detailed account pulls no punches. Facts and figures that stagger the imagination are revealed in starkly human terms, and disturbing questions abound. Padfield addresses the controversial issues raised with candor and insight, and the result is not only an impressive achievement but a milestone work in the history of the 20th century.

What listeners say about War Beneath the Sea

Extremely detailed and monotonous as is evidenced by the three and four hour chapters throughout the book. While a fully complete history of the submarine conflicts in both the Atlantic and Pacific during WWII, each chapter is basically a repeat of the previous one.

War beneath the Sea

Not what I was expecting, it explains the technical development of submarines and the different nations that exploited them. Thus, rather dry and largely of limited interest.

This book brilliantly balances the human story of the main characters with strategic, tactical and technological developments and fascinating details. The author manages to tell the story as a historical narrative without the feeling of jumping around. Very enjoyable.

I'm only on chapter 5 but already I can say this is a great book covering all sides of the submarine war in WW2. Welk narrated with a good mix of the overall strategy coupled with eye witness accounts, Highly recommended

The text is very good, blending a detailed factual account of submarine warfare in Atlantic, Mediterranean, and Pacific, with first-hand accounts of many particular engagements, the accompanying bravery and occasional brutality, and giving balanced critiques of strategies. The narrator appears not to have any consistent knowledge of German pronunciation, and his ignorance of the change of sound when a letter has an umlaut over it gets irritating after the hundredth hearing.

Brilliant.! 3D Chess at it's best!

There were so many occasions listening to this book that I thought "This is brilliant!" It was like listening to a clearly described and well-paced coverage of an exciting game of 3-dimensional chess - just when you thought you knew what the different opponents should do or should have done there was yet another factor to take into consideration. I have been a keen reader/listener of military history for many years but I don't think I have every read/heard anything like this that was so good at covering the myriad of variables that impacted on both minor and major decisions and outcomes, be they the success or otherwise of a particular attack (or defense).by a single unit or major policy decisions impacting on many hundreds of vessels and lives. The coverage of the submarine war in the different theaters was very well handled in a chronological (and logical) way, the variations in vessel design, strategy and training were most informative and the different personalities were well drawn but the real strength of the book lay in its ability to lay out the different macro and micro strategic considerations affecting the outcomes.

I cannot recommend the work itself highly enough, especially to those who prefer a 'thinking man's description of history'.

My only complaint (and one too minor to warrant any loss of stars) was that on occasion it was quite apparent when the narrator has 're-started' reading. Given the level of audio recording technology available today and the ability to manage the process it showed a lack of professionalism on the part of the sound personnel. Doenitz would have had them shot!

If you are into the genre I throughly recommend this one. Incredibly informative, well read and interesting.

books as well researched as this are not written anymore. This is a valuable find. If you enjoy hearing from a master of research AND storytelling then this is the book for you.