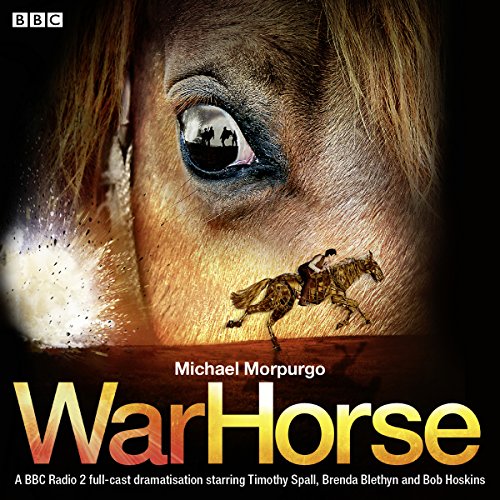 This production - adapted by John Tams and Sally Ward at the behest of the author - is a moving tale of a boy's extraordinary bond with his horse during World War One.

The story of a farm horse sold from Devon into the mire, wire and machine guns of the Great War of 1914-1918 brings together a stellar cast, including Timothy Spall, Brenda Blethyn and Bob Hoskins, with music and songs from some of the UK's finest folk musicians.

This drama was directed by John Tams, who was nominated for an Olivier Award for his work on the phenomenally successful War Horse stage epic at the National Theatre ['the theatrical event of the decade' (Times)] and which also inspired the Steven Spielberg film.

What listeners say about War Horse

amazing book everything about it was amazing

The soundtrack includes superb singing and sound efftects.
It was a fantastic audio book experience.

loved it. absolute pleasure. enjoyed every minute of the book. I hope you do as well

The problem with this book is mainly the story I didn’t like it (not saying you won’t ) and the narrative part wasn’t that great because they have a weird accent and I find it really hard to understand .

I would recommend this book to anyone who is 11-any age the only reason why I don’t think under 11s should read it is that it is very sad and emotional but if you are not 11 you can still get the book (this is just my opinion) .

The bit I did like is when they brought the horse home .

I hope you found this review informative remember that this is my opinion and it might not be the same as yours. Toodles 🐴

I wept I read the book befor but I wept for the wasted lifes of both human and animal that died in this dreadful war that the human race will never learn to live in peace.
my god that we never see the likes again

enjoyed this book immensely . I loved seeing it from the horses perspective. Very enjoyable

Emotional retelling of a classic

Where does War Horse rank among all the audiobooks you’ve listened to so far?

A great story full of emotion

Not listened to any others books narrated by these people yet...

A classic to relisten to again. Fantastic book by a creative author

I loved it VERRY VERRY much and I wish there was more to listen to and how come there's only one chapter and its really sad at some points.
This is excellent