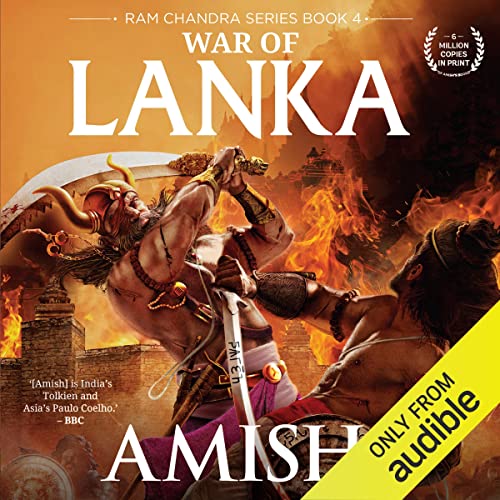 Lanka will burn. Darkness will perish.

But can light endure?

Greed. Rage. Grief. Love. Smouldering tinder, waiting to trigger a war. But this war is different. This one is for Dharma. This war is for the greatest Goddess of them all.

Sita has been kidnapped. Defiantly, she dares Raavan to kill her—she'd rather die than allow Ram to surrender.

Ram is beside himself with grief and rage. He prepares for war. Fury is his fuel. Calm focus, his guide.

Raavan thought he was invincible. He thought he'd negotiate and force a surrender. Little did he know....

The first three books of the second-fastest-selling book series in Indian publishing history—the Ram Chandra series—explore the individual journeys of Ram, Sita and Raavan. In this, the epic fourth book of the series, their narrative strands crash into each other and explode in a slaughterous war.

Will Ram defeat the ruthless and fiendish Raavan, constrained as he is by the laws of Dharma? Will Lanka burn to a cinder or fight back like a cornered tiger? Will the terrible costs of war be worth the victory?

Most importantly, will the Vishnu rise? And will the real enemies of the land fear the Vishnu? For fear is the mother of love.

Contains an exclusive bonus chapter, read by Amish, to recap everything that has happened in the Ramchandra series before War of Lanka.

Amish is a diplomat and author. Amish published his first book in 2010 and has written 10 books (both fiction and non-fiction) till date, including the recently released War of Lanka. His books have sold 6 million copies and been translated into 20 languages. Critics have said that his books are backed by tremendous research, deep thought, a rooted-pride in India, and a liberal progressive outlook. The Week magazine acknowledged Amish as the fastest-selling author in Indian Publishing history. Forbes India has regularly ranked him among the top 100 most influential celebrities in India. Amish was also selected as an Eisenhower Fellow, a prestigious American programme for outstanding leaders from around the world, in 2014. He won the 21st Century Icon Award in the UK in 2021 and the Golden Book award for his novel Suheldev in 2022. He is also a host for TV documentaries, including for Discovery TV’s highly acclaimed Legends of the Ramayan with Amish. He has taken over as the Minister (Culture) at the Indian High Commission in the UK and the Director of The Nehru Centre in London in October 2019. Amish is an alumnus of the prestigious Indian Institute of Management (IIM), Calcutta (he was given the Distinguished Alumnus Award by IIM – Calcutta in 2017). He worked for 14 years in the financial services industry before turning to full-time writing.

What listeners say about War of Lanka

Firat of all, the story was quite poorly written in terms of both plot and details. Too many unrelated facts being spouted out and repeated ideas from previous book related to the war.

Then the narration was equally poor. The narrator wasn't good at differentiating voices for characters and pronounced some words very incorrectly like "corpse" instead of corps. Then they added these background audio that was too loud at times and inappropriate at other times like unnecessary torture sounds and a constant background bird calls

Expected better than this.

Expectations from Amish is too high.This book is good overall but I felt something is missing.He has not utilized some of the characters like Indrajeet and Hanuman. It seems like in an attemt to sumup the war story in just one book it loses the detailing at some parts of the book.This is giving the same feeling like the last season of GOT.

Ram series is not that well written.

I don’t this Ram series didn’t touch the core of my heart.
Detailed but not worth reading or listening.

narration and audio quality is great
but, even i am amish fan but content in book is not up to the mark. author twisted ramayan that level. soul is missing from ramayana

The story is extremely bad. Meluha was good and this one is just trying to cash in on the reputation of Meluha. The audio effects in the audio books just make the experience bad. It wud have been tolerable if there were no Audio effects.

The interpretation was interesting. Even Enemies, war etc were presented with dignity and grace

Having read the Ramachandra series,. I must say that Amish is courageous. Retelling an epic like Ramayana has been attempted by many, and none had the audacity of Amish. He has broken all conventional myths , yet has been successful in keeping the narrative engaging. We do not have a Ravan with ten heads. We don't have Kaikeyi conspiring to banish Ram. Sita's mystery mother is sheer pleasure to read. And many more such twists.

It is evident that Amish has done solid research to boldly narrate his version of Ramayana.
The only flaw is that Amish gets carried away by his interpretation, so much that his lenghty observations and philosophy tends to slow down the otherwise gripping story.
I enjoyed listening to the War of Lanka, as much as I did the three other books.
I now await the final book on the war of all wars....

loved it, the narrative and the music added liveliness in it, waited for this book so long and it's just perfect. the detailing the storyline

Unlike the first 3 books, this one lags in all dept.
And please shut off those background sounds.

just waiting for this to end..

the book started off good. but so many fillers in between makes you want to hear the end. as you near the end the story is over!

best audible performance I have experienced so far

the best audible performance I have experienced till date. loved the bg scores during certain parts

Best book with all emotions

But worst ending, Ravan should have given tough fight and in war meghanath should have defeated at least 10000 people

great narration although different than what we kn

loved it. the whole story in a new light. it sounds so near to the story we know but still afar and still sounds true

Book 4 background sound effects and music totally detracts from a great nuanced story. It’s an altogether too busy assault on the ears: part of the listening joy is using one’s imagination, not contend with silly bird noises. The new narrator also doesn’t help either. Audible if you must, have a no music option included in the app settings. Why introduce a new format for 4th instalment? Consult the listeners first please. I’ve not seen a review on the previous instalments requesting background sound effects….stop it, or give app users a choice. Disappointed

Over stretched a bit, the background music/sound was annoying.. overall a good listen, thanks.