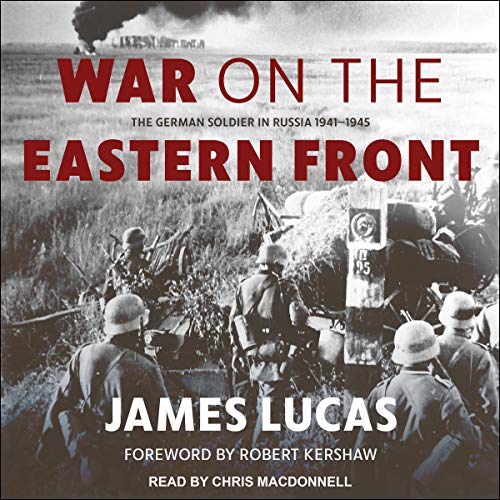 Dawn on Sunday, June 22, 1941 saw the opening onslaughts of Operation Barbarossa as German forces stormed forward into the Soviet Union. Few of them were to survive the five long years of bitter struggle.

A posting to the Eastern Front during the Second World War was rightly regarded with dread by the German soldiers. They were faced by the unremitting hostility of the climate, the people and even, at times, their own leadership. They saw epic battles such as Stalingrad and Kursk, and yet it was a daily war of attrition which ultimately proved fatal for Hitler's ambition and the German military machine.

In this classic account leading military historian James Lucas examines different aspects of the fighting, from war in the trenches to a bicycle-mounted antitank unit fighting against the oncoming Russian hordes. Told through the experiences of the German soldiers who endured these nightmarish years of warfare, War on the Eastern Front is a unique record of this cataclysmic campaign.

What listeners say about War on the Eastern Front

Narration is slightly labored but clear

wish it was longer and more detailed about the battles. I was impressed nonetheless. Easy 5 stars.

This book is full of granular detail from the perspective of the common soldier. I found it compelling.

I went into this book with low expectations. I’ve read quite a few narratives of the eastern front. Each one had its “one” part that made it worth reading. This title was good... all the way through. I recommend it.

A Must Read for WW2 Buffs

Chris MacDonnell does an excellent job narrating “War on the Eastern Front”.
I like the way James Lucas has many detailed stories from firsthand accounts of not only combat, but what the combatants on both sides were feeling, fiscally and emotionally. The extreme hell and hardships both sides went through.
I’m not pro-Nazi Germany or Communist Soviet Union by any means, but you must admire the comradery on both sides. Lucas shows this very well in his book.
I also like how he ended with the story tellers’ fates on their life’s after the war.

A very well written and researched account on the everyday lives of the soldiers who lived and died in some of the worst conditions imagined..

One of best military book i read/listened

Hands down one of the best battlefield book i ever read. Writer really gave an excellent account of war stories, strategies and reasoning behind the war on eastern front.
Well narrated by Chris MacDonnell too.

Lots of research, lots of facts and figures, lots of information but not very lively or enjoyable.