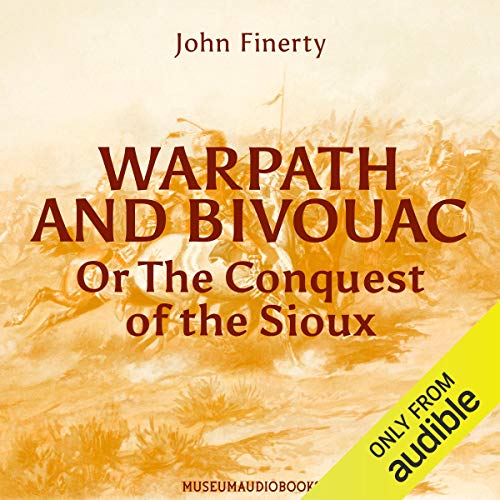 Warpath and Bivouac, or the Conquest of the Sioux

John E. Finerty (1846 - 1908) was a reporter assigned by his paper to report on the last major Indian war on the Great Plains in 1876 under the command of General Alfred Terry.

Warpath and Bivouac, or the Conquest of the Sioux offers a picture of campaigning in the 1870s and records the sights and sounds of plains warfare. This campaign was the one in which General Custer suffered his famous defeat at the Little Big Horn.

Finerty gives an account of the Battle of the Rosebud which preceded the Custer massacre, and also reports on the later 1879 campaign to force the surrender of Sitting Bull and his Sioux who were the last resistance after Custer's defeat.

when I first started listening to this I was appalled by the racist overtones of the writing. I downloaded it chiefly because it is a brand new release dealing with the lakota Indian wars and includes a large part of Crooks movements, and the battle of the Rosebud just days before Custer's fight in the little big horn.

when I went back a read the book description I realized it was written in 1890 by a reporter that actually rode with Crook, was at the Rosebud battle, and subsequently was with the Canadian major at peace talks with Lakota, and had a personal conversation with sitting bull himself (whom he refers to as "mr bull".