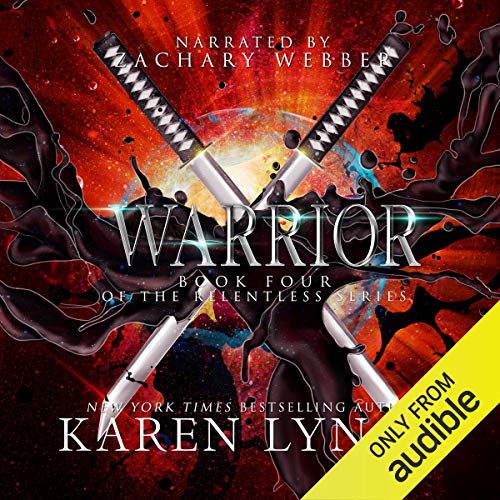 The warrior has finally met his match.

Nikolas Danshov is the Mohiri's finest warrior, fearless and lethal with any weapon. For almost 200 years, he has devoted his life to keeping humans safe from the demons that walk the earth. Revered by his people, he is a legend in his own time, a warrior undefeated in battle, and prepared for anything. Until her.

On a routine job in Maine, a twist of fate brings Nikolas face-to-face with the one person he had never expected to meet: his mate. Sara Grey is unlike anyone he's ever met. Beautiful and fiery, she ignites his desire while her innocence and vulnerability awaken a fierce protectiveness in him. Now all he can think of is keeping his mate safe from the dangers that hunt her, even if she fights him at every turn.

You know Sara's story. Now hear it again through the eyes of her warrior.

This book is considered upper YA due to some mature content.

What listeners say about Warrior

Nice counterpoint for the series

This book is really only for people who have read the Relentless series. There are major gaps that you have to fill in from memory. Being told in first person, our hero has no way of knowing or telling us what else has happened - key things that you need to know for pieces of this to make sense.

Regardless, I did enjoy the story. It was a bit long but still fun.

I LOVED THIS SERIES!!

I LOVED THIS SERIES! I loved listening to his side! I hope to hear more from both the author & Narrator!!

Zachary Webber is a great narrator!

I've read and listened to all of the Relentless series. When I tried to read warrior, I couldn't get into it as much as the previous books. But then I got the audio version and I listened to whole thing in a few days! Zachary Webber really brings this book to life and his narration is fantastic. Definitely recommend the audio of this book - but you need to have read the first 3 books (the Relentless Trilogy told from Sara's POV) before reading this one to get the most out of the story.

I usually don't like books that tell the same story that's already been told, just from the other person's POV. But I really enjoyed hearing Nikolai's views on things, and how he had managed to track down Sarah time and time again when it hadn't been explained in the other books. This book tells the same story that the first 3 books told from Nikolai's POV and ties a lot of loose ends up. Greatly told, and I can't wait to read the last book coming out soon!

What Every a POV Book Should Be!!!!

I had waited months for Warrior to come to Audible and it didn't disappoint. So many POV books only cover half of the overall story but Warrior covers all 3 Relentless books in one Great Book. Yes a lot of information is repeated but it's great to now know each side of the main characters different thoughts and reactions about the same conversation. How I wish ALL authors were as detailed with our favorite characters thought and feelings to their situations as Karen Lynch has been in this Wonderful story.

Zachary Webber has so wonderful a voice that it is easy to picture the scenes Karen Lynch wrote.

What a great narrative of a fantastic book! if you liked the book you will love the audible version too.

Better than the original trilogy

I always a book enjoy that shows a different point of view this is something else entirely I wasn't sure about this one at first it was great if you liked the original trilogy you'll love this Sarah is a cool protagonist but neeklos is a total BADASS!!! And you get a prittey good look at how a full fledged Morie warriors live

if you enjoyed reading Sarah's story you will love the take on the Warriors point of view. it was so interesting to know what his thoughts and feelings were during the story as each event unfolded. this was a happy read for me that was full of action and so many unexpected twists. I recommend this is a must read! Love the characters and now want to know what happens with the others!!

loved it, felt a great connection with the story. an amazing way of retelling the story

I adored this book in writing, and love it just as much from Zachary Webber. He is amazing narrator and his voice is perfect for Nikolas. The story enraptured me, and I'm sure it will do so again many times over.

A different narrator. I honestly felt like he was reading a grocery list. His tone never changed, there were no individual voices and it bored me to tears. Even he sounded bored! Every single sentence was monotonous. Where was Nickolas' accent? Someone like Robert Petkoff would of brought this story to life. If I could give minus stars for this narrator, I would. Truly dreadful! One of the few books I haven't been able to finish.

I loved the relentless series and therefore assumed I'd love Warrior, too. The writing wasn't the best, too many, "I did this," "I did that," "I said this," "I said that," for me to let go and enjoy it. Perhaps if it had of been a different narrator I would of enjoyed it more. Maybe it was just the way he read it and not the writing so much. Either way it was a no finish for me and I'd never listen to another book narrated by Zachary Webber ever again. I have MS and reading triggers severe vertigo so I have been unable to read for years. Audible is my only pleasure as I'm bed ridden, so when I say I'd rather not listen to a book ever again than listen to a single chapter narrated by him, you can see what a big deal that is to me. AWFUL, AWFUL, AWFUL!!!

I'd advise you to read this book, rather than listen to this narrator.

The world through Nikola's eyes

It was so interesting to hear the story from another point of view. This fills in some of the gaps and let's you get a deeper understanding of the quiet, strong warrior. Absolutely Brilliant

This is a brilliant look at the trilogy of Relentless seen from Nicholas's view. I fell in love with these books all over again. Zachary Webber reads this book with great feeling and character. I've listened to this serie over and over, just love it.

Brilliantly written and read. What we all wanted to know Nicholas better and hear him tell us of his trials as he tries to protect Sara. The narrator has just the right amount of resignation in his delivery as he struggles and fails (mainly) to win the protect Sara

amazing loveed it can't wait to listen to the next

The amazing words from Karen brought to life

I loved reading this book but listening to it in audible is a whole new experience! Karen’s magical words are transformed into a captivating dialogue that enhances your enjoyment of Warrior

Missed opportunity -but worth a listen

The story told by Zachary was great. Unfortunately, unlike the Relentless series it essentially gave no new story. It was still pleasant to listen to but new POV stories have the opportunity to delve far deeper in a character's past and thought process. It started to but didn't quite get there.

This is perfect....sheer perfection!!!karen has chosen the perfect narrator for Nikolas who has brought his story to life in an absolutely mind blowing way!! I could listen to his voice all day long. I've read the book more than once because the relentless series is one of my all time favourites, Karen is a truly gifted story teller and Warrior is a masterpiece 😁 if I could give this book 100 stars ✨ I would!!

I found this book boring because it was the same story just coming from the Nicolise side so I felt no difference I felt I had paid twice for the same book for this reason I have requested a exchange.

WOW!!! JUST WOW!!! That totally flew past all my expectations I had of this book!!!!! I wish I could give this book more then 5⭐️️it definitely deserves it!!! 😁I am soo happy that my very first signed book, came from my favourite author!! Karen Lynch you did not disappoint at all!!! 😃

Super, super quick summary of book...instead of following this amazing series through Sara's POV experience exactly what her Warrior felt and did at every turn as he takes you on an epic adventure that leaves you completely satisfied...knowing you finally have every tiny detail, every answer plus more...I particularly liked the ending how it gave you that extra scene on the why and how they ended back up in Maine. It was awesome! I actually now finally feel like their part of the story has come to an end. Although in my mind it will never be over....never!

P. S. Now I must go sort out my very jumbled emotions!!....I can't believe how one can be so happy and yet so very sad at the same time!!! ☹️

Really not worth the time, almost word for word a repeat of the first three books just from Nikolaus' point of view. Really does not add a lot to the story.

this series has had me hooked from the very beginning! I have loved hearing Nickolas' thoughts and emotions!!

I have listened to the original 3 books, Relentless, Refuge and Rogue and now Warrior and still i want more, please Karen write another book a spin off from this series, i wanna know what happened to the supporting characters like Roland, Peter, Chris, Jordan and so on. You are a fantastic storyteller and I want to read and listen to more of your books. I am so very happy that you wrote Nicholas side of the story, it make perfect sense to hear his point of view. Zachary Webber you have the sexiest voice and an excellent narrator, you bring the characters to life and you take your listeners for a ride and blows their minds, thanks to you and Karen love u guys xox

Having heard Sarah's story I debated listening to this one but I do so love Zachary Webber! This book brings another domension to their story and its always good to hear both sides.