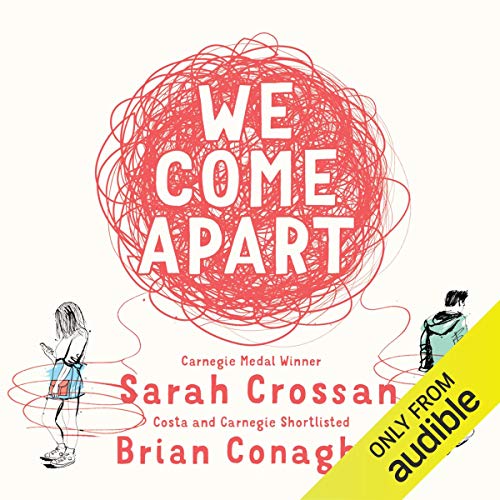 Jess would never have looked twice at Nicu if her friends hadn't left her in the lurch. Nicu is all big eyes and ill-fitting clothes, eager as a puppy, even when they're picking up litter in the park for community service. He's so not her type. Appearances matter to Jess. She's got a lot to hide.

Nicu thinks Jess is beautiful. His dad brought Nicu and his mum here for a better life, but now all they talk about is going back home to find Nicu a wife. The last thing Nicu wants is to get married. He wants to get educated, do better, and stay here in England. But his dad's fists are the most powerful force in Nicu's life, and in the end he'll have to do what his dad wants.

As Nicu and Jess get closer, their secrets come to the surface like bruises. The only safe place they have is with each other. But they can't be together forever and stay safe - can they?

An extraordinary, high-impact, high-emotion collaboration between two Carnegie short-listed rising stars of YA.

What listeners say about We Come Apart

Fantastic quick read. A touching story written in verse, showing the difficulty of immigration, & the naïvety and beauty of young love.

What made the experience of listening to We Come Apart the most enjoyable?

Enjoyed the dual narration, from two voices that DID sound like the characters they were portraying

What was one of the most memorable moments of We Come Apart?

Some bullying incidents at school - quite tense and realistic

Have you listened to any of Rosie Jones and Oliver Hembrough ’s other performances? How does this one compare?

Both talking about their home lives, in the way of teenagers - a little blaze, as if it is normal, or naively, making it all the more heartbreaking

Review from Amazon:
Such a wonderful book, and an excellent collaboration between two YA authors I've admired and read before.

Sarah Crossan writes beautifully in verse - it can feel like poetry but when read aloud (I audio-read this), it simply sounds like a story in short chapters. Brian Conaghan, I assume, took Nicu's story, while Crossan took Jess's, though I may be wrong.

This short novel reminded me of Crossan's debut - The Weight of Water - both short novels with rather dark hearts, and topics of racism and intolerance at the forefront.

Jess has a troubled family life. Nicu, no less so, but as an immigrant, has other problems as well. Both end up, as young offenders, on a community scheme where they gradually become friends and very close, sharing their secrets and forming a strong attachment. It all must come to a head though - can they make their own happy ending?

There are some quite upsetting scenes both in the teenagers' family lives and at school, of abuse, violence and bullying. Jess grows more as a person than Nicu, as she sees how he is treated and must decide on which side she will stand, while Nicu must brave the storm as he valiantly tries to get on with his life in a strange country.

Both feel very real - Jess talks like a real teenager, the narrator bringing her to life manages to make her sound vulnerable, world-weary at times, but still a young streetwise girl who is trying to find her way.

Nicu is also voiced well, his imperfect grasp of English still conveys his intelligence and moral nature, his adolescent feelings for Jess: all teenagers at heart at very similar, whatever language they speak.

The story doesn't let the teens off easily, nobody gets an easy get-out-of-jail card, the problems of both families don't go away, bullies don't miraculously see the light. It's a short book but packs a mighty punch and until the last pages you really don't know how it is going to end.

A dual narrative splits the story equally between the two, back and forth we sometimes see the same scene from both perspectives, which only deepens the sympathy for Nicu 'the outsider' as he contends with ignorance and prejudice.

The verse style means the book speeds by. I wanted more at the end, I wanted to find out what happens next - maybe its a story the authors can return to, pick up again later in the lives of Jess and Nicu. It's certainly a relevant theme that needs to be read.

Two excellent narrators on the audiobook make both leads come to life, great voices and accents, pitched right at the ages of the characters.

I love both these authors and found this a powerful and moving collaboration, which works very well as an audiobook, as it would on paper.

With thanks to Nudge Books for the sample reading copy.

the style of this book is quite different from others which also make it unique. the story blend in very nicely. you will either love it or dislike it. in my opinion, this book is a gem and i will keep it. great performance from Rosie and Oliver.