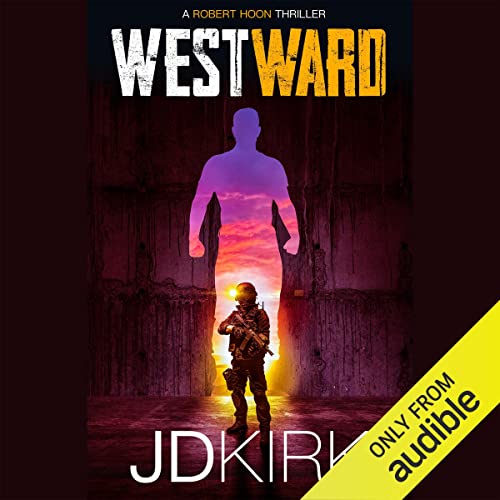 Disgraced ex-cop Robert Hoon has crossed the wrong people for the last time.

Having struck a humiliating blow against the criminal network known as the Loop, Hoon has been targeted by the Alphas, an elite squad of assassins who will not stop until he is dead.

Outnumbered, outgunned, and on unfamiliar territory, Hoon’s only chance of survival lies several hundred miles north, in a place he knows better than anyone else on Earth.

Westward is the third thriller novel in the Robert Hoon series and is perfect for fans of Jack Reacher, James Bond, and excessive swearing.

What listeners say about Westward

I hope this isn’t the end of our Mr Hoon!! These characters had me laughing out loud, in fact I’m still laughing when I think of the counting from 1-7 exchange, among the many many other witty exchanges. It was good to see the serious bits were kept serious, this is definitely my sort of series. Still loving the connection with Jack Logan. The narrator is perfect for these stories.
Well done!

First let me say that not since John Kennedy Toole's "A Confederacy of Dunces" have I read so many hilariously ridiculous conversations that made me laugh out loud.

That being said, this being a continuation of the story of Bob Hoon's post police adventures, if you haven't listened to the first two books in this series I would urge you to do so before consuming this. Bob's a VERY complex character, originally designed to be unlikable, and he straddles the roles of Anti-Hero and Fierce Warrior in such a way that you grow to love him for his own version of honor.

Nothing is easy for Bob, which means that if "Bob's your Uncle" then expect 3 parts wiseassery, 4 parts increasingly complex problems and a heaping portion of unexpressed heart, because he can't be perceived as going all soft. Angus King does another brilliant job bringing the characters to life in situations which range from the sublime to the horrific, with huge smatterings of the afore mentioned ridiculousness. The pacing of this book is impeccable, and the prose draws you right into the story where the surprises and twists will hit you the hardest.

You'll rarely have as much fun being creeped out, cheering for the good guys and laughing at Bob's frustration, like a dangerous, violent and foul mouthed Basil Fawlty, as he attempts to insure his loved ones are safe, keep his promises, avoid death and destruction and put the boot to the groin of the bad guys. Worth the listen!

The best one yet

I laughed, cried, laughed again.
At one point laughed so much that the guy across from me on the train needed to know what i was listening to, he started the first Logan one while we were still on the train.

I've enjoyed the mystery books by JD Kirk from the first. When he jumped from police procedurals to these 3 Joon the action hero I discovered these were fun too. But this 3rd book- I quit listening to before the halfway point. I did jump to the last 2 chapters which sent me back to my stopping point to hear the whole book. If you are tempted to stop this book just hang in there- the best part is the 2nd half.
I hope he continues with his mystery suspense thrillers for a long time. As he fleshes out his characters and dangles at least one thread leading us awaiting a sequel.
The language? It works for me....

Normally, I avoid books with too much cursing….but in this book, it FITS. Bob Hoon is the character you want to hate but then you end up loving him. He’s definitely someone loyal, and you want him on your side. These books are better every single one. I can’t wait for the next one!!!

I’m so glad that I stumbled across JD Kirk and Robert Hoon I’ve greatly enjoyed the first three books in the series and look forward to the next. But I’m even more delighted to have discovered Angus King, whose pitch-perfect narration brings Bobby Hoon to life and enriches the story beyond measure. King has now replaced George Guidall as my favorite audiobook narrator, which is really saying something! I’m now about to start on King’s narration of the DCI Logan series.

I will be the first to admit that I was not a huge fan of Bobby in in the DCI Jack Logan series because his language seemed so distracting and unnecessary in those books. However, as a stand alone character you learn to admire the his unmatched ability to creatively curse and insult. Honestly, he often has be rolling. That being said I think they could be creative in a way that is less redundant (Looking at you f-word).

This is a great addition to Bobby's story. I loved the first book, liked the second book and was absolutely thrilled by this latest book. I will be the first to admit when Barry J Hutchinson became JD Kirk and started writing crime books instead of the comedy sci-fi he had been writing I was pretty unhappy because I didn't want Space Team to end. Oh and I need a sequel to The Sidekicks Initiative. However, these bring with them his creative use of humor in a way that appeals to a wider audience.

Now if they just release a Zertex approved version of these books so I can get my wife to read them. That would be fonking amazing.

JD Kirk does such a great job with character development. You feel like you know the characters. It’s like you can feel their emotions.

I have listened to over 200 Audible books and many have been very good. What turns a good book to a great book is when the story, the characters and the narrator are perfectly aligned. That is the case with the JD Kirk Hoon series.

Hoon is nearly as addictive as Nesbo's Hole for me. I thoroughly enjoyed every book in the series. Hoon was always a brilliant addition to the Logan series, so I was made up when he was let free to create mayhem away from the confines of the 'polis' All I can say is keep them coming JD Kirk. I'M A FAN 😝

I have enjoyed the series thus far but this one was not as enjoyable for me for a few reasons.
Some of the storyline (the twins) was incomprensible. Why, knowing there was going to be some kind of violent showdown, would anyone invite a pair of young children to tea, even if they were family, let alone unrelated kids from the village down the road? Even the barmy Berta isn't that unhinged. And why on earth Hoon - or anyone- would continue to trust their survival to a complete idiot like Iris, even taking into consideration their 'brotherhood' of their military service if a bafflement to me. This tale is peppered with this kind of irritant and is it just my imagination or has Welshie's wife substantially changed her accent from north country English to Spanish?
Angus King is an excellent narrator, skipping accents seamlessly.

Why did the accent of Gabrielle change?

I love Bob and the whole storyline..... My only issue with this book is the change of accent for Gabrielle.... It really jarred and spoilt it for me. I think Angus King is my favourite narrator, a true king!

JD Kirk in a recent newsletter said he thought this was the best thing he'd ever written - how right he was.

This didn’t disappoint. Great storyline, brilliant narration and so many laugh out loud moments at Hoon’s one liners! When is the next audio book due to be released???

Great story, excellent narrative and made me laugh out loud on more than one occasion. More of this character please

Third in the Rob Hoon series and best so far. Couldn’t read it fast enough. Characters are brilliant and the narration makes it. Even with some dodgy accents. Can’t wait to read the last one. Well done JD Kirk.

Potty mouth Bob Hoon is back with a few more friends and a sister with a even bigger potty mouth than him. Who knew that was possible. Probably the best Inthe series so far and the previous ones were great so that says a lot.

Brilliant, takes a lot to make me grin but this took the biscuit

Hoon just keeps getting better... and now Roberta, so good. I have listened to this a few times now and still haven't tired of the wit. excellent narration as usual. Thank you!

This series of books has been the best I’ve listened to in a long time!
It’s both rude and funny with a wide variety of swearing, some of which even I didn’t know!!
It’s also friends and families helping each other and caring for each other in their own unique way.

A story that starts with a kidnapped ostrich and ends with with a gun battle, but makes you laugh out loud - now that’s storytelling at its finest!

awesome swearing. Hoon is a legend. Next book please. I love his language attitude and general I don't give a f*** view on life. seriously cheers me up on the days when the world sucks 🙃

I love the dark sense of humour in Robert Hoon novels, I can see in my minds eye the story unfolding, well narrated and brilliantly written, I hope we get to share more adventures soon

Hoon is my absolute favourite

Loved the story! JD Kirk, please write more! Hoon is worth it, over and over again!

Write faster! Looking forward to the next update. Please include the sister and some romance but less anger and swearing that’s overdone

I can’t get enough of this series. Thought Bob might be the funniest character ever, until Berta came along.