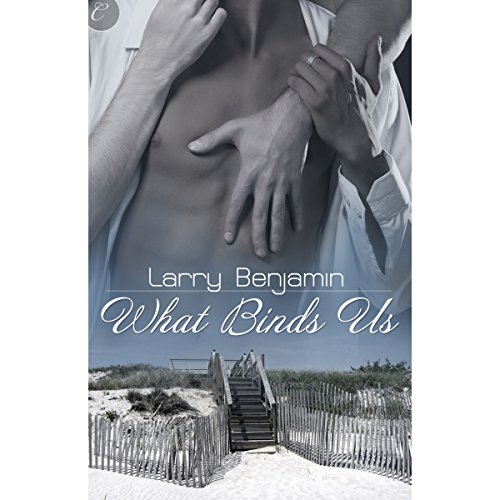 Thomas Edward is only a teenager when he escapes his working class neighborhood. He's ready for anything—except the arrival of Donovan Whyte in his life. Sophisticated and dazzlingly handsome, Dondi quickly becomes the center of Thomas Edward's universe, introducing him to a world full of drama, passion and feuding families.

When their relationship fizzles, they remain uneasy friends until Dondi invites Thomas Edward to his family's summer house. Thomas Edward is immediately attracted to Dondi's mysterious brother, Matthew—and finds himself hopelessly drawn to both men.

As time passes, Thomas Edward develops a unique bond with both brothers as they orbit around each other, although he knows only one of them can be his lifelong love. Will the three of them be able to find a way to hold on to each other? Or will love, its loss, and the threat of death destroy their connection once and for all?

What listeners say about What Binds Us

Worth the Lost Sleep

This is easily the best book I've listened to in a very, very long time. I'm very into erotica and romance. This was not purely romance and definitely not erotica. But it was about love, both romantic and familial and primarily centered around males. I'm a female, but I absolutely, unquestionably loved it. The story was great. But beyond that, it's the language, the terminology used by the author. He has a finesse for stating things in such beautiful ways that every word resonated with me deeply. It's not a feel good book, but still, through my tears, I was both happy and sad. It was moving in both positive and sad ways, which few books manage to accomplish. I could go on, but I think you get the message. I don't think I've ever given any book 5 stars across the board. But I couldn't identify anything negative about my experience with this book. I'm writing this shortly after I finished the book, so my rating may be based on my continual afterglow. Whatever the cause, this book is worth a listen.

What made the experience of listening to What Binds Us the most enjoyable?

Everything. The characters, the story and definitely the narrator. He made the characters come alive. This is one of those books that stays with you for years after and you smile about it.

The Great Gatsby. The author is a master of the English language.

Which character – as performed by Richard Magnus – was your favorite?

Who was the most memorable character of What Binds Us and why?

Dondi. Although the story is not told from his POV, it is mostly his story as seen by his best friend Thomas Edward. Thomas' romance is also beautiful but it mostly a historical memoir about Dondi's experience.

What a great surprise!

I was expecting another light read, something that I'd fly through quickly. But what I got was a beautifully written engaging story involving complex characters who touched my heart. I can't wait for Larry Benjamin to publish another book. This was a real find, and it will stay with me for a long time.

Thomas Edward, the narrator, shows the reader a world much different from his own. He is kind and loving, and these traits make him credible and finally someone the reader cares a lot about.

I loved it. The story is unique and dynamic, populated with richly drawn complicated characters. I was very moved.

This was another book I listened to by audio version and I really enjoyed it. The narrator, Richard Magnus, together with an engrossing story, kept me riveted for the whole 7 hour duration.

This story was a journey. It is the story of Thomas Edward who is swept up into the world of Dondi and his brother Matthew. Dondi and Matthew's upbringing is a world away from Thomas Edward's own background and the character's themselves are unique.

This is a story of love and family and craziness. It's interesting and unique. It's emotional and it's sad. Somewhat into the story I began to expect what the outcome might be but it made it no less emotional.

Far beyond the average MM romance

Definitely. It was a very satisfying, very emotional book. It is way beyond the standard of the usual MM romance fiction.

It has some of the feel of the Great Gatsby and even Brideshead Revisited. The glamorous but dangerous and self-destructive scion of a wealthy family is a sort of modern American equivalent of Lord Sebastian Flyte. But it is a much more modern novel than either of those.

What does Richard Magnus bring to the story that you wouldn’t experience if you just read the book?

Nothing particularly unexpected, but he did a very good job.

If you could rename What Binds Us, what would you call it?

Where does What Binds Us rank among all the audiobooks you’ve listened to so far?

Compared to the other audiobooks I've listened to, "What Binds Us" is a great read.

What I liked best about this story are the characters and their developing relationships. In some way I was able to relate to their friendships and in someway their story line.

I wanted to read this book in one sitting but was unable to due to work. I did chapters 1-7 driving to and from work, and 8-30 on my day off work today, finished in 3 days.

A definite must READ!

Would you listen to What Binds Us again? Why?

Absolutely. The premise of the love story is more than two people and more than just romantic love. It is about making a family.

Edward Thomas. He started as a young college student in love/lust and became a man that understood the different forms of love and built a family on that foundation.

Which character – as performed by Richard Magnus – was your favorite?

In sickness and in health love blossoms

Yes depressing but so darn good!

Would you listen to What Binds Us again? Why?

The return by Brad Boney

He is a solid narrator.

Impossible. There is too much to process. It needs breaks.

The author has talent - unfortunately, enough that I kept listening past the point where I wanted to stop. By the end though, I just wanted it over. The story became more and more melodramatic. The characters were unrealistic and unbelievable, except for perhaps the mc. The situation was predictable. Just take a pass.

This book is not something I can recommend. It was tedious and did not get any better from the start. I only listened to the first few chapters and they were painful. It is a period piece which is part of what I found difficult to listen to.

Has What Binds Us turned you off from other books in this genre?

Not the genre, but definitely the author.

Who would you have cast as narrator instead of Richard Magnus?

The narrator was ok. If the story had been better I would have had no problem with the narration. The story is so bad it colors everything else.

For starters, I have to admit I wasn't that keen on the narrator, his bored nasally drawl for Dondi in particular seemed so affected, and there wasn't much variation in his characterisations so that one voice seemed to bleed into another sometimes. Having said that and to be perfectly fair, I would venture a guess that this story was quite difficult to narrate with so many male characters to distinguish between, so Mr Magnus’ narration gets a 3.5/4 from me.

The story however is a different matter – it’s a must read story. I didn't fall ‘in love’ with any of the characters as I normally do. Having lived through that particularly awful period in history, when what seemed to be an entire generation of young gay men were brought to their knees (absolutely no pun intended) by that ruthless killer known as AIDS - well, it’s not something you forget quickly.

I found the writing itself to be theatrical, flamboyant, amazingly descriptive and thoroughly ‘of the moment’, and yes, I do consider Mr Benjamin to be something of a word-smith. I did shed tears at the end. It’s a shame that Dondi seemed to live up to the stereotype that exists when heterosexual people usually think of gay guys…that they’ll 'sleep' with anyone that moves and has a pulse but I'm here to tell you I knew straight guys like that, so no, it’s just plain old human behaviour. I don’t condone Dondi’s behaviour, but I can understand why he was as he was, and why people were drawn to him. Thomas Edward, black and working class, who was the narrator and principal character of the story, was there for all of them.

As far as the filthy rich Whyte family is concerned, I could honestly only gasp in wonder (read... was gobsmacked, it just boggled the imagination) at the wealth that Dondi and his brothers were surrounded by and took for granted as they grew up, and to discover that each of them – Colin, Matthew and Donovan (Dondi) – was gifted $25 million by their ‘father’ on their 18th birthdays, well it beggars belief that only Dondi went off the rails. I found Colin and Matthew to be pretty level headed all things considered, and you’ll notice I put father in inverted commas….you’ll have to read/listen to the story to get the background details on both Gio and the boys mother, Mrs Whyte (I don’t excuse her viciousness towards Dondi, but I can sort of understand it in a way, given what went on before and the fact that she was duped)…and of course, I did pick up on the line ‘the apple hasn't fallen far from the tree’ when it was uttered. I'm not going into the details of the story any further; you must read it for yourselves…oh, and watch the film ‘The Normal Heart’ , which is also set at the onset of that dreaded plague. HIGHLY RECOMMENDED . This story gets all the stars from me.