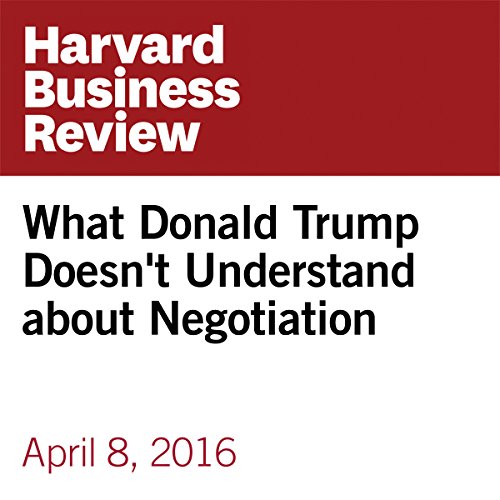 The next president of the United States will need to be an extremely effective negotiator. Armed conflict, political deadlock, and diplomatic crises abound. The president will be called upon to resolve the war in Syria, manage complex relationships with Russia and Iran, handle hot spots such as North Korea, Libya, and Ukraine, navigate competitive tensions with China, and revive a modicum of bipartisanship in Congress. Ironically, the only presidential candidate who has been asserting his prowess as a great negotiator is someone who has precisely the wrong instincts and experience for the types of conflicts the president will face. The Donald Trump approach to negotiation would be not only ineffective but also disastrous - and there are clearly identifiable reasons for this.

"What Donald Trump Doesn't Understand about Negotiation" is from hbr.org, published on April 8, 2016.

What listeners say about What Donald Trump Doesn't Understand about Negotiation

This is not even an audio book, it's dribble. The funny thing is, I thought this info was true until Trump continues to prove us all wrong with his negotiation abilities. The funny thing is that the same author of this has, on multiple occasions, in other books, has commented on the mastery of Trump's negotiating... Funny how now that he's an "enemy of the left" that all of a sudden he's unfit for anything. The really amusing part is that I voted for Hillary but with all this hypocrisy and talkin crap about Trump I've started to support him a little and can see he's doing great things for our country #WalkAway