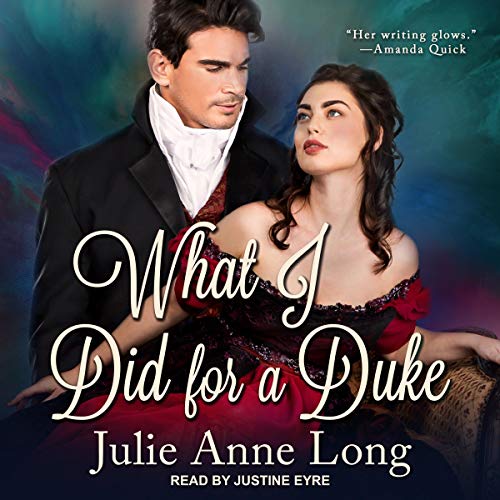 What I Did for a Duke

For years, he's been an object of fear, fascination...and fantasy. But of all the wicked rumors that shadow the formidable Alexander Moncrieffe, Duke of Falconbridge, the ton knows one thing for certain: Only fools dare cross him. And when Ian Eversea does just that, Moncrieffe knows the perfect revenge: He'll seduce Ian's innocent sister, Genevieve - the only Eversea as yet untouched by scandal. First he'll capture her heart...and then he'll break it.

But everything about Genevieve is unexpected: the passion simmering beneath her cool control, the sharp wit tempered by gentleness...and though Genevieve has heard the whispers about the duke's dark past, and knows she trifles with him at her peril, one incendiary kiss tempts her deeper into a world of extraordinary sensuality. Until Genevieve is faced with a fateful choice...is there anything she won't do for a duke?

What listeners say about What I Did for a Duke

I love this story and was so happy to have it out on audio. However, I found the narration really disappointing. Justine Eyre's performance is very flat and fast, and she never seems to pause for a breath! I played the book at 80% speed which made it better.

This has been one of my favorite romance titles for years, and I have waited for years for an audio release of it. It was everything I hoped for! I consumed it in one day and will definitely listen again and again.

awful embarassing attempts at the style of speech of the time. and justine eyre's english accent is like nails on a chalkboard i try to listen to her again every so often and have to give up.

The first time I read this book, I breezed through it and was not impressed. Some years later, I read it again, slowly, and found it to be fantastic. I wrote in my review:
"It's true, as I said, that not a lot happens here. The story spans about a week during a house party at the Eversea's Sussex estate. Alex arrives intending to take revenge on Ian Eversea by seducing his younger sister, Genevieve, who is already in love with Harry. Then he changes his mind. And Genevieve changes hers. The end.
But, oh the journey that these two make to reach their happy conclusion is quite lovely. Ms. Long's prose sparkles; her humor insinuates itself without ever being laugh out loud. But you must read it thoroughly and not skim over the interior monologues (as I tended to do)."

So listen carefully, because it is worth your attention.

❤️❤️❤️ Wonderful book! Amazingly well written, a tug and pull love story that will keep you reading through the night. I absolutely loved Alex and very much enjoyed Geneve! Great chemistry. Plot 8.5(1-10) steaminess 9(1-10). First book by this author. I will definitely read more!!!

My first read from this author and I just could t stop until the end.. the ending was a little too quick and tidy for me but I loved the journey. Main characters are absolutely lovable - Gifted writer who brought the characters to life.. narration was ok.

Is it Lust or Love?

Genevieve has loved Harry for years, they are such good friends, they like the same things. She has waited three years for him to propose and then he tells her he is going to propose to their friend Millicent. This sends her into a slow developing romance with another house-party guest, Alex Moncrieff, the Duke of Falconridge. But Alex is at the party to seek revenge on Genevieve's brother, Ian, and what better way than to seduce his sister.

Julie Anne Long brings about what at first seems impossible. Turning a love addled miss into a passionate siren with the "wrong" man.

This is probably my favorite book of the series and I'm delighted that the series is now on Audible.
I also initially found the narration to be too fast but I could adjust it on my Fire tablet so it was not a problem.

I didn’t really like the first book I read by this author, but this one was good! The duke and Genevieve had great dialogue. This book is good for anyone who likes their romance steamy and with wit and atmosphere.

This wasn't an English narrator (for an English story) but she does her best and is better than many. The story's terrific. Sadly most audiobooks set in England are ready by Americans. I've stopped buying them to be honest. If the publishers can't be bothered to do the thing right, don't bother. Julie Anne Long is great; read the book.

Without a doubt the best in the series

Beautiful delivered and excellently developed. You dread when or if Alex will continue plotting or how he could ever be redeemed... and if either of them will come to their senses. THE conversation where you see behind his facade was truly touching. I really think Alex and Genevieve are wonderfully matched and I especially liked that is had very little to do with beauty which draws them to each other. Especially on the duke’s part...

Really, really, the best in the series! Highly recommend, but of course read the series in it’s entirety and in order!!