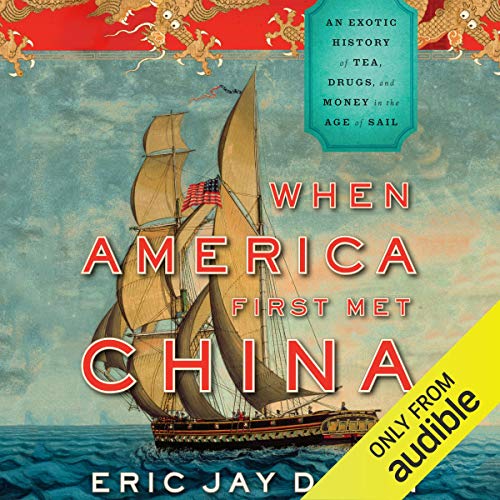 An Exotic History of Tea, Drugs, and Money in the Age of Sail
Written by: Eric Jay Dolin
Narrated by: A. T. Chandler
Length: 10 hrs and 28 mins
Categories: History, World

Ancient China collides with newfangled America in this epic tale of opium smugglers, sea pirates, and dueling clipper ships. Brilliantly illuminating one of the least-understood areas of American history, best-selling author Eric Jay Dolin now traces our fraught relationship with China back to its roots: the unforgiving nineteenth-century seas that separated a brash, rising naval power from a battered ancient empire. It is a prescient fable for our time, one that surprisingly continues to shed light on our modern relationship with China. Indeed, the furious trade in furs, opium, and bche-de-mer - a rare sea cucumber delicacy - might have catalyzed America's emerging economy, but it also sparked an ecological and human rights catastrophe of such epic proportions that the reverberations can still be felt today.

Peopled with fascinating characters - from the "Financier of the Revolution" Robert Morris to the Chinese emperor Qianlong, who considered foreigners inferior beings - this pause-resisting saga of pirates and politicians, coolies and concubines becomes a must-listen for any fan of Nathaniel Philbrick's Mayflower or Mark Kurlansky's Cod.

Interesting, yet not greatly edifying

What did you love best about When America First Met China?

It really did give me better insight into current relations with China and its people.

What other book might you compare When America First Met China to and why?

I was fascinated. Spell bound by the quick turns in trade and what that meant for the human condition and our world relationship.

This was fantastic! It starts out so slow I thought I had made a mistake but great things come to those who wait. The storyline, adventure, engaging facts and true understanding of our history with China really heated up. By the middle I wouldn't have stopped listening for anything in the world and I am so happy I stuck it out. I would recommend this book to 10 out of 10 people. Worth it! I walked away feeling like I knew more, which is always my goal when I read. Mission accomplished with this one.

I most enjoyed when he uses specifics to get to the heart of the story. For example he details America's first ship employed in the China Trade after US independence is formally acheived, some of the trade and conflict in the Canton system, or mutinies in the coolie trade.

I was fascinated by his detail in the development of shipping building in the form of earliest clippers built for the China trade, the sailing times, competition with Britain, commercial factors driving it, and its participatory roots the competitive sprit leading to the popular sporting of today's America's Cup.

Would you listen to another book narrated by A. T. Chandler?

Do you think When America First Met China needs a follow-up book? Why or why not?

Yes - I woudl like to see him analyze trade and specifically ocean steam liners in Modern era in China trade.

I would have like to have heard more detail and less story telling.