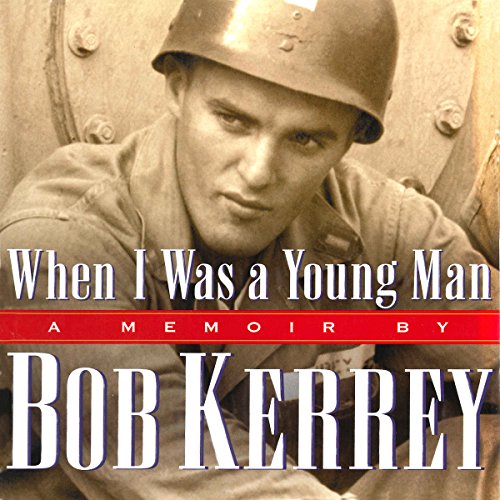 When I Was a Young Man

Bob Kerrey grew up outside Lincoln, Nebraska, in the 1950s, and in his trademark style - serious, sometimes wry - he tells of his journey from that heartland to the dangers of Vietnam, to the hospitals where he recovered from his grievous injuries, and finally to the Nixon White House where he was awarded the Medal of Honor.

Inspired by the stories of biblical heroes and thrilled by the cowboy serials he saw at the movies on Saturday afternoons, Kerrey grew up in a world as safe and quiet as anywhere you could find on Earth. When he went off to college he knew or cared little about what lay beyond Nebraska, though soon his life would be changed forever. Bob Kerrey comes from a family of soldiers, and so, when the Vietnam draft loomed, he volunteered for the elite Navy SEALS, hoping for adventure and the honor of serving his country. After his arrival in Vietnam, he had to face the brutal reality of the war. In his first firefight, women and children died. His second encounter cost him part of his leg. In his year at the Naval Hospital in Philadelphia, he drew strength from his fellow patients, some more disabled than he, and he learned to walk again. But he had turned against the war and could no longer find solace in his religion.

A quest begins and ends this audiobook. When his father was dying, he asked Kerrey to find out how his Uncle John had really died in World War II. It is this quest that inspires Bob Kerrey as he narrates his own personal odyssey in this remarkable and powerful book.

I thought this was going to be an easy short book to read. I noted that reviews were all over the place for and against. I decided to read it to see what all the controversy was about. I always like to read books about recipients of the Medal of Honor.

This is a short memoir of a young man from Nebraska. It covers his early life in his home state. He graduated from the University of Nebraska as a pharmacist. He joined the Navy went to Officers Candidate School and then joined the Navy SEALs. He was shipped to Vietnam. The part of the book covering the War is short and not too detailed. He tells of several actions he took part in. He tells of a midnight commando raid on a remote village called Thanh Phong in the eastern Mekong Delta on February 25 1969. He says they were caught in a deadly crossfire and unfortunately some Vietnam civilians were killed. He received the Bronze Star for this action. In his last action he describes very little. His platoon was sent to an island in the Mekong River to wipe out a group of sappers. They were caught unexpectedly and a fire fight started. Kerrey said he was caught in the leg by a grenade, and remembered very little of the action. For this action he was awarded the Medal of Honor.

The majority of the book describes his convalesce after have a below the knee amputation. He also briefly recounts some problems with flash backs after returning to Nebraska. The book ends here telling nothing after his convalesces.

I discovered he went on to be a small businessman, governor and then senator from Nebraska. I also learned that after this book was released the government of Vietnam has charged Kerrey with war atrocities.

Overall I found it an easy fast read that was written in a matter of fact way. The author was the narrator of the book.

Very Moving, I had to read it twice.

What did you love best about When I Was a Young Man?

Bob Kerry's book reminded me of growing up in the 60's, joining the Navy and going to Da Nang in Viet Nam. When I 1st met him in Omaha in the late 70's I was very impressed with him.Through the years his deeds were great.

I felt like I sitting in his living room and he was telling me about his childhood and his experience in the Navy and Viet Nam.

I am buying the hard copy to give to my young grandson. This book had to be very hard for him to write but I am very glad he did. The next nice day I think I'll go for a walk over the Missouri on the bridge named after him.