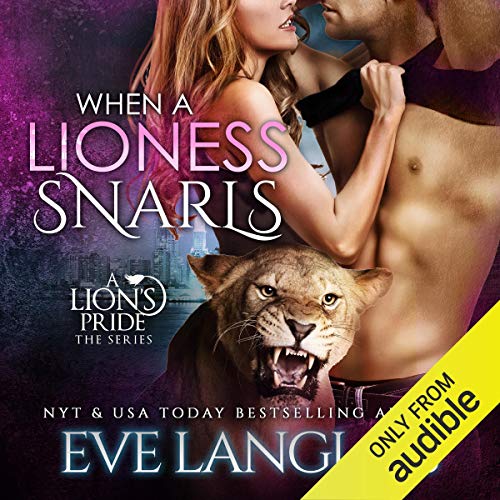 When a Lioness Snarls

Stalking is a crime only among humans. In a lioness' world, it's called dating.

Jeoff is a bit of a killjoy, a super cute one who gets furry on full moons.

But so does she.

Luna is everything Jeoff is not. Outrageous, outgoing, and violent. Very violent, and unafraid to go after what she wants - and she wants Jeoff.

Silly man, he thinks he can resist, but once a lioness sets her sights on a man, paws off! And if anyone thinks to try and take him... There's a reason why the ladies of the pride win the yearly award for Baddest Biatches.

What listeners say about When a Lioness Snarls

Would you listen to When a Lioness Snarls again? Why?

I would definitely listen to When a Lioness Snarls again. I thought the sexual chemistry between Luna and Jeff was intense.

I liked Luna's character the best because she shows a strong and brave personality.

The sex scenes of course! LOL

What is stalking exactly?

Did Serena St. Clair do a good job differentiating all the characters? How?

I have to say that I did not like Serena St. Clair narrating. I have listened to a lot of Eve Langlais' books and I have to admit this was one that could have used another narrator. I do not think that she was meant for this book in particular.

She may be great in another genre or with another author but for me it was not executed well.

I loved Jeoff and Luna. I thought there romance was more about a cat a mouse game (no pun intended). I loved the fact that Luna knew that she wanted Jeoff and refused to let him go. Then Jeoff became the one to chase Luna. I also loved the story that was happening and we are introduced to a new character, Jean Francois, that gets his own book When a Lioness Pounces. I want to know more about him and his group.

I didn’t think I would like this book but I throughly enjoyed this story- good plot, right mixture of action, romance and a little suspense with fun dialogue and surprising characters development. Go ahead and read it!

I only got 6 minutes into this book and had to quit. The naration was one of the worst I have ever heard. Complete over-acting. And everything she said was written for a 12 year old. Seriously BAD book.

When the Lioness Snarls by Eve Langlais

What confidence!
When a Lioness Snarls by Eve Langlais

Narrated by Serena St Claire
Book 5 of The Lion’s Pride series. Paranormal romantic comedy. Can be read as a stand-alone.
The heart of the lion is, of course, arrogant. In this book, lioness Luna is ordered by her King to help Jeoff investigate several missing shifters. He is so luscious, that she has no pride or inhabitations in flaunting her naked body and enticing him to a quickie. Shocking her, he continues to refuse her!
Jeoff is seriously interested in Luna but he want more than just a fast romp.

Fun and lighthearted, these two eventually succumb to passion and solve the mysterious disappearances.
A fast and entertaining read. I listened to the audio version which was great.

Loved it! Can't get enough of this series! The characters are so playful and real that despite it being paranormal I feel the characters are totally relatable. This author is an instant buy for me. Her books are always fantastic. The narrator did a great job!

It was so good!

of all the books in this series I've listened to do far, this was the most suspenceful. I tried guessing as to the kind of perpetrator the pride was dealing with. Again it was such fun listening to the antics of a certain sassy lioness and a wolf trying to keep his composure! Serena again did a splendid job in bringing the story to life. Definitely worth while the listen!

I absolutely love this series, I cant wait to hear the next one!! I ❤

love this series..fast pace and packed with humor. I cant wait to read the whole series....so far I enjoy all her book. Her characters are always wacky and fun to follow

This is another great story for the A Lion's Pride series. Luna and Jeoff are an amazing pair. I really enjoyed seeing how the crazy, impulsive, feisty Luna got the uptight, stand-offish, straight-laced Jeoff to come out and play. I really enjoyed seeing what the author did with the characters. I also enjoyed the new species addition to the series. I look forward to seeing where the author takes us next.

The narrator also did another great job. She brought another life of life to the characters. I look forward to listening to more of her reads.

Not always giving separation with the voices.

Good narration but not always giving separation with the voices. Understandable as there is a lot of different characters but not quite enamoured with how this sounds. BOOK REVIEW When I read the blurb I thought HUH, cannot say I saw these two getting together. CATS & DOGS. Once again Ms Langlais prevails and brings us an enjoyable read. I waited for reviews to be posted before purchasing this book then truthfully forgot I had bought it for my holiday reading. Jeoff is in so much trouble when Luna sets her sights on him. Not as humorous as previous books as Jeoff is a bit of a stick in the mud compared to Lunas ‘In your face, life’ attitude. Didn’t see at the beginning how it would work between them and if they didn’t have to work together on the missing shifters, I am not sure their relationship would have worked out. Saying that I have loved Luna from the beginning and have been waiting for Jeoff to get his BALL AND CHAIN, His words not mine. They actually managed to balance the other in a complimentary way, showing and giving the other what they didn’t know they needed in their lives. A very good story that brings in more characters that are not shifters but Whampyres. Interesting but the loss of the young shifter lives was upsetting to me. This can be read as a standalone but the story works much better read in order.