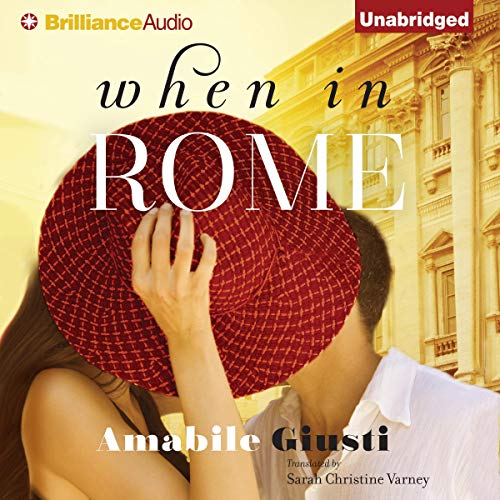 As her 30th birthday approaches, spirited and unconventional Carlotta is a little nervous. She's just been fired because of her irrepressible frankness, her family is a mess, and her love life is nonexistent. Plus, living in Rome isn't cheap, so she's forced to rent out a room in her apartment to make ends meet.

Her new roommate, Luca, a gorgeous writer who can match her wicked sense of humor, has a lot of cons: he's sloppy, he smokes too much, and he has a nasty habit of bringing home a different woman every night. Carlotta doesn't want to admit it, but she's beginning to fall for the charming novelist whose bedroom seems to have a revolving door. After they share an unexpected kiss, she'll do anything to suppress her passion and protect her heart. With her crazy relatives and a new job to deal with, can she muster the courage to confess her true feelings? And will Carlotta find happiness in this rented romance?

What listeners say about When in Rome

This book wasn't for me, overall. There were moments that I enjoyed, albeit, mildly. But it's movement is due primarily to what I think of as cutesy-type of humor. While some of the wittiness was smile-worthy (e.g. "I feel like a virgin. Virginity is in your heart, not your hymen. It's an emotion."), it was less often than the cutesy-type humor (i.e. humor that refers to raunchy things in a PG fashion, with heightened, unnecessary levels of hysterics). For example, "You know what they say about a guy with a big nose. He's also big down south." And, referring to a penis as "it," and saying "I haven't touched a man in this region in months" and "He rearranges his soldier, still at attention…" Really?! "It," "region," "soldier." Is Carlotta 30 or 3rd grade? It's a bit juvenile sounding to me. For the vast majority of the story, the only adult word allowed is "ass," used sparingly with "rear" and other synonyms used instead. During an argument, there were exceptions to this, but very rare. For instance, once, when Luca uses the f-word to angrily describe sex, Carlotta berates him for being explicit. And Luca uses harsher language during an argument with Carlotta. The contemporary demure PG-type language dominates the story, and, at times it comes across as prudish.
The narrator played up the cutesy-type humor perfectly, which only added to my barely-enjoyable experience. She's good at it, but it has to be something you like to want to listen to more of it. I don't.
Sex is barely a part of the story. You know that Carlotta had sex 2 times as a result of ONLY being told that it occurred, once before it happened and once after it happened. There is no, absolutely zero detail.
The two main characters were likeable. I liked that Carlotta worked in theatre design & props. It added interest as a result of being an uncommon job in the books I've read. Carlotta has a bit of a cinderella thing going on w/ her sister and mother, which added a certain aspect to the story. What that aspect is depends on the listener. Similarly, another aspect of the story is that Carlotta sees herself as the one who "always," in her words, gets the wrong end of things. That type of thinking wears thin quickly.
Carlotta is not described as a great beauty, with her freckles and small breasts referenced negatively frequently. But, of course, her love sees it differently. It's an overdone story trope but worked ok here.

If a "romance" with ok writing, without detail about the "romance," without seeing the falling in love occur on both sides, with very little adult language, and primarily PG talk, especially about sexual matters, then this is most definitely the book for you.

So awful and disparaging of women! I was going to get a refund but i felt this book was so terrible I needed to warn other people. Mostly because of its hateful portrayal of women; all females are either sluts or uptight sitting around for a man, all women care about is men, women are pathetic creatures who need men to rescue them. I wish women would be portrayed as actual human beings, by both male and female authors, books like this kick women right back to the 50s. Absolutely despised the whining spineless main character. Avoid this book!

Goodness me this was a struggle from beginning to about the last 20 minutes which were OK.

I received this book as a gift from Audiobook Boom.

Would you ever listen to anything by Amabile Giusti again?

I was disappointed in the story line. I was expecting more of a romance with more descriptions of the country

Who would you have cast as narrator instead of Cassandra Campbell?

The narrator was fine. I just did not like the story

I enjoyed the story and liked the narrator. She did a great job with the Italian accents. But I was frustrated and disappointed with the cruelty of Luca and of Carlotta's family. No one ever apologized or took responsibility for how they treated Carlotta. Her responses didn't help, but I can see why she did, she had to protect herself. Plus her sister needed to be slapped.

An obtuse, angst-filled heroine with no self esteem, one-dimensional secondary characters, and a story line that goes on and on and on with no plot progression..... don't waste your time! I found myself depressed while listening because the heroine and plot were so sad. I only listened to the whole thing because I desperately needed a happy ending after all that. It wasn't worth it.

On the other hand, the narration was fine. The narrator occasionally veered into more of an eastern European accent (rather than Italian) but it wasn't frequent or disturbing. I think the narration is the only redeemable part of the audible book.

This book was entertaining to hear at the beginning, but the characters did not grow on me and after some chapters it started to get very boring.

The heroin and the hero are so full of pride that they fail to engage. Their behaviours are more proper of fifteen year old kids trying not to lose high-school status than of thirty year old adults. The drama finally comes to an end when one of them magically changes its behaviour out of the blue. It seemed to me as if the author had no idea on how to fix her own storyline.

I'm not a picky reader but I was thankful when this audiobook ended. It has two stars instead of one because it's well written and the beginning was promising although a little bit slow.

Seems like such a long story to come to the conclusion I predicted in chapter 2. This is an ok romance, your typical love story. No explicit sex, but didn't really miss it, story was still ok w.o it. Very PG 13, somewhat entertaining, we'll written, unnecessarily long, would recommend if your looking for something to fill a silent void on a long car ride/commute.

Love the one you are with.

Loved it, made me chuckle, could not stop listening. Lovely, love storytelling. smiles all round.