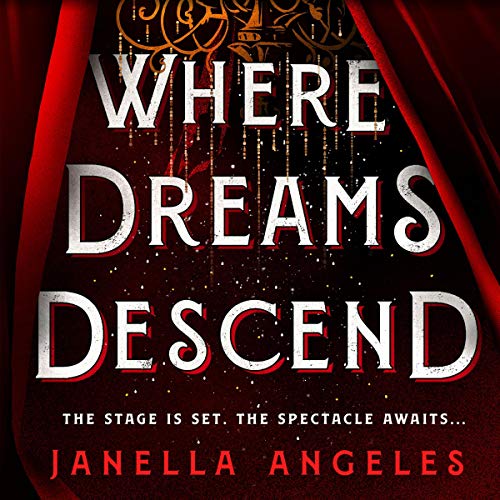 "Narrators Imani Jade Powers and Steve West team up to deliver an emotionally engrossing performance of this YA fantasy...[They] hook listeners from the first page." (AudioFile Magazine)

In a city covered in ice and ruin, a group of magicians face off in a daring game of magical feats to find the next headliner of the Conquering Circus, only to find themselves under the threat of an unseen danger striking behind the scenes.

As each act becomes more and more risky and the number of missing magicians piles up, three are forced to reckon with their secrets before the darkness comes for them next.

The Star: Kallia, a powerful showgirl out to prove she’s the best no matter the cost

The Master: Jack, the enigmatic keeper of the club, and more than one lie told

The Magician: Demarco, the brooding judge with a dark past he can no longer hide

Where Dreams Descend is the startling and romantic first audiobook in Janella Angeles’ debut Kingdom of Cards fantasy duology, where magic is both celebrated and feared and no heart is left unscathed.

"[A] spellbinding melody of a book, and the true magic is how Angeles puts all the best parts of an enrapturing theatrical performance onto paper and ink. From the gripping twists in the first pages all the way to the final, heartbreaking crescendo, Where Dreams Descend will surge you to your feet in a standing ovation." (Sara Raasch, New York Times best-selling author of the Snow Like Ashes trilogy)

"Lavish and opulent in a way that feels warmly familiar yet demands your attention. There are secrets upon secrets, a girl who’s boldly ambitious, and truly riveting stage magic. I didn’t want the show to stop." (Emily A. Duncan, New York Times best-selling author of Wicked Saints)

What listeners say about Where Dreams Descend

after reading previous reviews, I was excited about this book and thought it would be a great read! Not!! It kept building and building and each time I was disappointed. No true story line, disappointing characters, basically no real ending!! A really disappointing waste of money and time for me

This cannot be a debut... can it?! Masterfully done and absolutely beautifully written. Whenever Shane West is involved, I know I’m going to get one heck of a performance. But I wasn’t expecting so very much as I got from this story by Angeles!

⚖️ Plot: Every chapter was a plot twist wringing my heart out. I am so happy to have taken a chance on this on this book. It’s a series I know I will cherish forever! If there was just one thing I could ask for, it would‘ve been for a slightly faster pace.

🗺 World: the reason the pace though was slower was because so much was invested in painting the most beautiful portrait of each scene. I couldn’t not have asked for more if I tried. This world will not be easily forgotten.

💑 Characters: Kallia is an absolutely fantastic magician and role model. I see a lot of who I am and want to be in her. I connected with her instantly. Both Jack and Darren keep us dangling on a string and that never, ever ends. Even at the very past word. I will surely be gasping for each installment until they are available.

Note: This review contains NO spoilers

Well... Not bad at all. I actually did a read-along with the book and audiobook. And, DANG, it made this read even more entertaining and enjoyable. The narrators brought this book to "life." Where Dreams Descend is a debut novel by Janella Angeles filled with a good amount of mystery and magic. For being the first book in the duology, there was an abundant amount of introduction of this world and characters which made this an intriguing and poignant read. However, the pace at the start was slow and it felt a bit random; but, I just had to continue reading since I was already sucked in with its charm.

In addition to this introduction, I felt that there could be more character development for the entire "cast," in particular the "supporting cast." With that, I feel that it would have given more depth to those secondary characters, and to their journey and "performances." Moreover, the way the book is set up as "Acts," I think it was fitting for its theme and the plethora of information this book provided to set up the story. Yes, it felt confusing at the start, but then, as I continued reading, the story continued to develop and gained focus. I would have to agree with some other reviews that Where Dreams Descend had the feel of Phantom of the Opera and Moulin Rouge musicals, and Christopher Nolan's Prestige. I did find the intertwining of card suits, into the magic and mysticism of the story, made it enchanting. I also liked that the developing romance was so subtle that it was a slight "gasp" when the first sign(s) of romance came about... Ha! Overall, this is a decent first novel for Janella Angeles' debut as an author.

In regards to the narrators of the audiobook, I absolutely loved their narration of this story. Their reading added to the melodrama by their changing the inflections of their voices to match the characters and the tone of the story's atmosphere. They read at a good pace despite the beginning being slow. They made up for that as their animated voices added to the storytelling.

All in all, Where Dreams Descend is a debut novel filled with beguiling and captivating storytelling. It is a good start for new author Janella Angeles. I look forward to reading and listening to Where Night Breaks, the sequel and final title in the Kingdom of Cards duology. I just might find myself becoming a fan of author Janella Angeles' books!

I'm starting to think I just do not like books based around card suits.

It's not a dislike fully. The end was pretty spectacular because it's leaves me wanting to know why the Mirrors have so much power.

I need to know more about Jack and Demarco. They both walk a fine line between good or bad.

Are further more I need to know where Kallia came from. Who she really is Kallia.

This whole book you do not really get much backstory which like it did me kept me around to find out if we get answers... SPOILER..you don't just more questions.

Such a wonderful story of magic with very mysterious twists and turns. I quite enjoyed the storyline and the narration was spot on. For me the story was a little slow to start but quickly picked up and I was hooked. I don’t want to say much and give something away but I absolutely can’t wait for the sequel! I have questions that need to be answered.