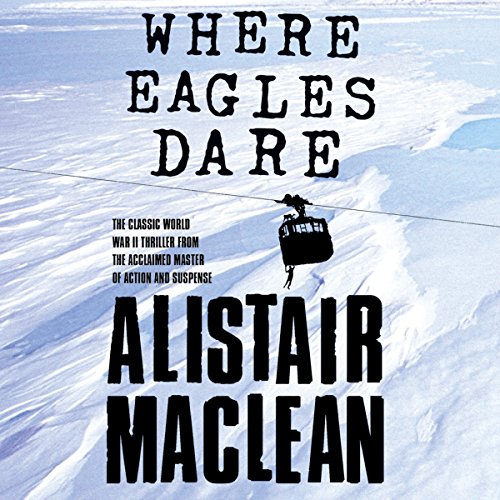 The classic World War II thriller from the acclaimed master of action and suspense.

One winter night, seven men and a woman are parachuted onto a mountainside in wartime Germany. Their objective: an apparently inaccessible castle, headquarters of the Gestapo. Their mission: to rescue a crashed American general before the Nazi interrogators can force him to reveal secret D-day plans.

"A real humdinger. The best MacLean." ( Daily Mirror)
"There is a splendid audacity about Where Eagles Dare, in which a handful of British agents invade an 'impenetrable' Gestapo command post...MacLean offers a real dazzler of a thriller, with vivid action, fine set pieces of suspense and a virtuoso display of startling plot twists." ( The New York Times)

What listeners say about Where Eagles Dare

Exciting and full of twists

An exciting and taut thriller this one. A good storyline which makes it no wonder that it was made into a movie already. The vocal performance was nice, making the experience quite riveting.

A nostalgic trip back to war stories that we grew up with. If world war 2 excites you, add this to your list of listens.

relived the thrill I experienced when I first read this as a teen ager and immediately became a fan of Alistair MacLean. Saw the movie many times.

A perfect old genre thriller
Narration takes you to the scene.

This is one of my all-time favorite thrillers. But, in this case, a great book is all but ruined by a truly terrible narrator. His accent is atrocious. He makes Smith and Wyatt-Turner, characters of brilliance and sophistication, sound like uneducated cockneys, who scream constantly.

Please! Do it over, and get Simon Vance, Frank Muller or Micheal Pritchard to do the reading.

I've read this so many times. And this audio book read by Jonathan Oliver is perfect. I love Shaffer and Captain Smith and Mary Ellison. Fantastic read. The sass and snark are strong with this book, and most of Alistair Maclean's books.

MacLean's Where Eagles Dare will not disappoint anyone interested in an immersive war espionage thriller. The reader Oliver performs with the character depth & grit equal to the film.

if u liked the movie, this is even better!

this book is great!, at this time iv listened to it at least 5 times, the writing style is good with a lot of humor hidden here and there, it keeps you on the edge of your seat (even tho your listing to a book) the voice acting is awesome as well, i had seen the movie and herd about the book so i thought id give it a chance, i haven't regretted that decision one bit.

I loved the movie and now the I have had opportunity to read the book!

So different from the film

I was so disappointed with audiobook when compared with the film. The banter between Smith and Schaefer I find childish considering what the mission entails. Got fed up part way through and deleted

He did write good stories

Even though I knew a lot of what was coming (from the movie), it was still suspenseful. While I myself couldn't remotely consider attempting such heroics, I can certainly lose myself in the story and believe in the heroes' resilience and stamina ... this is what I read books for!
The movie was good, but as usual - the book is better; besides, it lasts longer! 😁

Fantastic story. I questioned the performance in the beginning but then I realized his voice was perfect for this story. It gave a realistic feel to the whole setting.

One where the movie was much better

I did not like the story it was actually less believable to me than the movie.

A great story, not dealt justice

Possibly not. I love the story, it is a classic, and possibly Maclean's best work... but.. it is only a good listen if the narrator can recreate this. The producer/editors should also take some of the blame to. This recording is not upto the standard of the 40 year old cassette version!

Who might you have cast as narrator instead of Jonathan Oliver?

Anyone! (David Rintoul, Toby Longworth, Matt Addis, but as they are soooo good and therefore possibly to expensive to employ).. how about Colin Mace who read 'Nomad' so well ? ...actually that is a bit unfair, but Oliver struggles much like with 'The Guns of Navarone' with accents. The German ones all sound the same and like a cliched parody more akin to the BBC's 'Allo, Allo!', and the female voice of Mary, nearly made my ears bleed. The american accent for Schaffer is identical to Dusty Miller in Guns of Navarone, the germans the same, and I can only thank god that there were no greeks in this story. He seems to only be able to recreate one version of an accent. His fluency is in question as well, as he struggles to turning that into a coherent and not disjointed experience (lots of unnecessary pauses, or bad edits?). The problem here is that this is repeated from previous books, and although I believe he delivers this one slightly better, it is still a long way off from good, let alone perfect.I originally listened to this on cassette read by Martin Jarvis...the cassette, even in it's 40 year, mangled state is better!

I nearly cried in places when the accents assaulted my ears!

Oliver's performance in Fear is the Key, was a lot better (less accents), so I will be looking at 'When Eight Bells Toll' in the future, but will be weary of acquiring other Maclean works, that he reads. It is a real shame as I like Maclean's work, but it is only good if delivered to the same standard.

You have seen the film (more than once?) and probably read the book, now listen to it!

I thought it would feel like I had been listening for years, but no, the hours slipped by and when the end came; I thought “yep, still a very good story, no matter how many times I have seen/read it”.

It is a rightly described as a classic, with all the twists and turns you could want, almost to the last page.

The characters might be a bit light in the ‘backstory’ area, but that does not matter. Most of the story takes place over one day anyway and moves at a good pace.

The performance is good, not brilliant. There seemed to be little vocal difference across the characters, but for me that was fine, as it allowed me to ‘overlay’ the tones of Richard Burton, Clint Eastwood et al.

But I do have a dilemma – Ice Station Zebra or Puppet On A Chain :)

So if you like a good paced, action story – give this a try, I bet you will not be disappointed.

A known story but was curious, and it did not disapoint,,, I am a fan of the narrator, and his voice adds depth to the story, an exciting listen.

I’ve loved this book since I was 11 years old, and this unabridged and almost entirely original text is outstanding. MacLean always had a genius skill with pacing, and this book was pretty much his peak.

I didn’t really get on with the narrator though. I’m no way is he a bad actor, but for me was a little miscast. His style of reading, kind of a bit stop start with a very (perhaps too) subtle vocal range about the punchy parts seemed oddly out of place. For me, it felt ever so slightly that he was reading a book - but I *want* it to feel as though he’s telling a *story*. I personally would have enjoyed it more with stinger inflections and a little more variety.
All in all, I liked it, but felt I could have loved it.

Story is great but not sure the narrator got the tone right for me. Too much tongue in cheek humour which didn't jump out to me when I read the book.

Very enjoyable. A huge fan of the film, I found the book equally good fun. A difficult story to narrate, and the accents were a little weak, and dated. However this did not distract too much from the excellent plot.

As good if not better than the film (which was excellent ). Excellently narrated by Jonathan Oliver who sounds like Richard Burton when he wants too!. Good fun........

Since I was a boy I have always been a fan of Alistair Maclean and Where Eagles Dare is one of my all time favorite books by any author. Read it countless times since I was a teenager and Im now in my 60s. I have also seen the movie dozens of tmes. A great war story now brought to my ears by Audible. The narrator did a good job making the voices believable . The only negative was that having seen the movie so many times I was a bit disappointed it didn't sound like Richard Burton and Clint Eastwood but it didn't stop me enjoying and old favorite. highly recommended.

Unlike Ice Station Zebra the film is very similar to the book and I could hear Richard Burton’s voice in my head as I listened to this story. It is well voiced and left me wanting more.

Fantastic story. Just have to get though the first chapter. Really enjoyed it and would recommend to WW2 buffs.