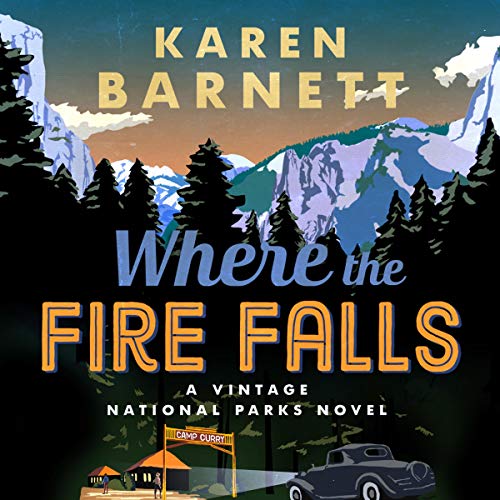 Watercolorist Olivia Rutherford has shed her humble beginnings to fashion her image as an avant-garde artist to appeal to the region's wealthy art collectors. When she lands a lucrative contract painting illustrations of Yosemite National Park for a travel magazine, including its nightly one-of-a-kind Firefall event, she hopes the money will lift her and her sisters out of poverty.

After false accusations cost him everything, former minister Clark Johnson has found purpose as a backcountry guide in this natural cathedral of granite and trees. Now, he's faced with the opportunity to become a National Parks Ranger, but is it his true calling?

As Clark opens Olivia's eyes to the wonders of Yosemite, she discovers that people are as vital to the park's story as its vistas - a revelation that may bring her charade to an end.

What listeners say about Where the Fire Falls

I have never been a fan of romance novels, but, trying broaden my exposure to good writing--whatever the genre--I decided to give this one a try. I am so glad I did! The story moves along cleanly, effortlessly, never forced or contrived. The characters are likeable and three-dimensional, their inner workings revealed gradually, naturally. The dialogue rolls along smoothly, naturally, and the historical and geographical settings seem believable and accurate to this history teacher and national parks buff. To top it off, the reader is superb! Her range of voices is broad and her performance adds one more touch of reality to the story. Overall, it was a most pleasant way to enjoy the time invested.

Refreshing Tale of Yosemite, Art and Faith in 1929

Such a different and refreshing historical fiction story! I loved it! An artist, Olivia Rutherford in Yosemite National Park in 1929 trying to provide for her younger siblings, and a park guide, Clark Johnson (former minister) both struggling with issues in their past. The imagery is described in wonderful detail. Olivia and Clark are both harboring secrets that threaten to expose them and wreck their futures, yet little by little, as they begin to know one another and experience the beauty of Yosemite, they each reveal a little more of their past. There is a lingering darkness over Olivia . . . and Clark . . . which each has to learn to turn over to God. This is a gentle, clean story, that is very enjoyable to listen to. Its from a different era, yet it perfectly portrays the human tendency towards selfishness and the constant battle between evil and good . . . which has existed since the beginning of time. I’m intrigued by these books and definitely will read/listen to the rest in the series. Great story, excellent resolution to the mysteries and the ending was well worth the wait!

I purchased this for a long road trip and had hoped that it might remind me of last summer's trip to Yosemite. It did but it also has an underlying evangelical christian subplot that seems inappropriate for a national park and was not clear in the description. Of all the wonderful locations from Yosemite that could be a central plot location, the chapel seems an odd choice. By the end of the book, I felt like I was listening to a church story, not a national park one.

Loved it! Beautiful story that is well written. Karen's descriptions of the mountains and details are amazing.