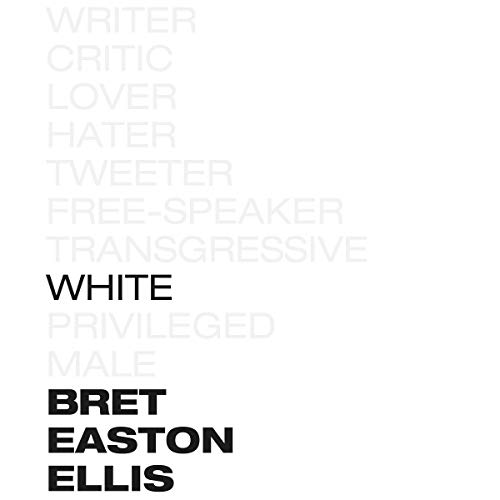 Bret Easton Ellis has wrestled with the double-edged sword of fame and notoriety for more than 30 years now, since Less Than Zero catapulted him into the limelight in 1985, earning him devoted fans and, perhaps, even fiercer enemies. An enigmatic figure who has always gone against the grain and refused categorization, he captured the depravity of the '80s with one of contemporary literature’s most polarizing characters, American Psycho‘s iconic, terrifying Patrick Bateman, and received plentiful death threats in the bargain. In recent years, his candor and gallows humor on both Twitter and his podcast have continued his legacy as someone determined to speak the truth, however painful it might be, and whom people accordingly either love or love to hate. He encounters various positions and voices controversial opinions, more often than not fighting the status quo.

Now, in White, with the same originality displayed in his fiction, Ellis pours himself out and, in doing so, eviscerates the perceived good that the social media age has wrought, starting with the dangerous cult of likability. White is both a denunciation of censorship, particularly the self-inflicted sort committed in hopes of being 'accepted', and a bracing view of a life devoted to authenticity.

Provocative, incisive, funny and surprisingly poignant, White reveals not only what is visible on the glittering, pristine surface but also the riotous truths that are hidden underneath.

The trolls have taken the centre

As a Scotsman and worn out lefty trying to keep up with the modern age of shifting moral goalposts, group think, victim olympics and the thought crime justice system that is social media, I have waited for a rational monologue from anyone with integrity and a spine. I just didn’t expect it to be the guy who invented Patrick Bateman.

I now firmly believe the most punk rock thing anyone can do is speak their own mind.

Bret, whether he realises it or not, is standing up to the cry bullies selfishly dismantling everything that makes our western culture a space where they can exist. He will go down in history as one of the few who saw true intolerance and stared it down. In his own meandering, roguish way.

An outstanding work by BEE. Terrifically narrated. I’m bemused by some of the criticism of this first class book. He has such a distinct view and is a completely honest commentator on the Culture.

How freedom of expression became an ‘aesthetic death wish’

As a corrective to the endless virtue-signalling of liberal American as it experienced a collective post-Trump nervous breakdown, this is a masterpiece you won’t want to end. There’s waspish wisdom throughout, and a strong element of memoir, as Ellis looks back on his career, with a particular focus on American Psycho (in which Trump is a recurring character). He also recounts meetings with celebrities including Tarantino. Whatever your politics (and Ellis didn’t vote for Trump), this is an intelligent, funny and thought-provoking book by a fiction writer who has evolved into a fiery and compelling polemicist.

You do not have to agree, it is his opinion

If you like movies, if contemporary news interest you, if looking behind the curtain of Hollywood is some thing of interest, if you want to spend time with someone that is not part of your echochamber this is a perfectly good book, be prepared to confronted by ideas that are not your own and enjoy the stories of people that you will never meet, this is a monolog by someone who is just himself and we need more of that.
Did I agree with all he had to say? no. did he spout propaganda? no he is just what he is and deliciously self deprecating also he confesses things that most of us would not even tell ourselves.
A good read of someone different.

Ellis articulates, in noninflammatory terms, an alternative view that McMedia tries to drown out. fantastic!

Interesting and provocative but a bit repetitive

BEE is his usual challenging and engaging self. He makes worthwhile points (if in a deliberately challenging way), about freedom of speech in the era of Trump and Identity politics. Basically he’s reminding people that “Sticks and Stones...”, and wondering why people have become so sensitive to criticism or simple comment. He reads his own book, so couldn’t be better as a performance. Book is full of back stage stories from his career but the key points are made a too often. Feels a bit padded...

Let me begin by saying that in many ways this is incomparable to his other books just down to the concept in itself. At worst it’s an extended rambling rant, but at best it’s an intriguing insight in to Ellis’s paranoia and grievances with the culture of today.

The good:
Interconnected themes woven together in the essays, which could seem never ending and pointless if they weren’t so expertly collated.
There are occasional references to American Psycho, which in all honesty are the real insights we want to hear about. This includes an ongoing ambiguity about whether AS is about himself, as well as an ambiguity about his own experiences in that period.
He’s invariably against happy endings and resolutions in storytelling. I found myself agreeing with his to some extent, but it just pointed out how important it is for him to continue writing novels.
His unease at how the digital age has made everything disposable really spoke to me.

The bad:
I became quite annoyed with his indifference to Trump, which is ironic if you read the chapter itself. I get how it may become annoying that other people overreact to his indifference, but his preoccupation with this becomes even more annoying. I guess most people just assume that an educated writer that many look up to would be expected to be against a leader who seems to have the opposite ideals.
His work has rarely been about plot, but I do miss the times when he at least tried to construct one.

That said, I sincerely hope that his next release is a novel, because for me this was not quite worth the wait.

This was so fantastic and refreshing—a wonderful take on everything from current politics to culture in the 70s and 80s to Ellis’s own time writing his books. I enjoyed all of it. Perhaps you think I shouldn’t, as a millennial “coloured” leftist female, but to think that would be to misunderstand what he’s doing and what he’s about. I don’t think he is at all stirring anything, I think he’s genuinely concerned about the way aesthetics are often hijacked by political ideology. And I join him. I worry too about group think; where you can’t listen to both sides of political persuasion like we once could. what happens to a society that no longer cares about art? That is is scary—when you can’t call out or question ideology it becomes dogged. And where to do so you can be labelled misogynist or racist (as a coloured woman I myself have been called racist!m for the most inane defence of something!). Everyone has to have the same reactions to art now and to not think ‘super important’ films are actually any good could get you cancelled. I don’t think Ellis says anything to warrant the vitriol he got when this book came out — but then I guess sometimes you can use the crazed generation that is mine to your PR advantage.

Introversion in the age of Weakness

I enjoyed BEE’s classic analysis/over- analysis of everything wrong with the last 15 or so years. With heavy thought and deep insight from the life of a gay liberal responding to the radically partisan thought control of his friends and colleagues, Bee gives his own (refreshing) take on the “Age of Trump.”

I thoroughly enjoyed listening to Mr Ellis read his brilliant book White. This is a sharp observation of the present American society. He leads us step by step through his career and along the way expanding on the greater societal milieu of his time. Well worth the time to listen.

A clear, well spoken iconoclast who is a pleasure to listen to as much as he is to read. I really enjoyed his insights on his writing and the clarity with which he spoke on the state of the post empire world.

A voice of reason

A timely observation of the culture wars from one of Gen X's leading flag bearers.