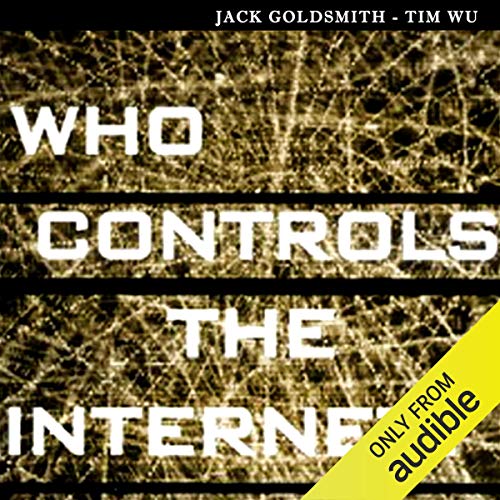 Who Controls the Internet

Is the Internet erasing national borders? Who's really in control of what's happening on the Net--Internet engineers, rogue programmers, the United Nations, or powerful countries? In this provocative new book, Jack Goldsmith and Tim Wu tell the fascinating story of the Internet's challenge to governmental rule in the 1990s, and the ensuing battles with governments around the world. It's a book about the fate of one idea--that the Internet might liberate us forever from government, borders, and even our physical selves.

We learn of Google's struggles with the French government and Yahoo's capitulation to the Chinese regime; of how the European Union sets privacy standards on the Net for the entire world; and of eBay's struggles with fraud and how it slowly learned to trust the FBI. In a decade of events, the original vision was uprooted, as governments time and time again asserted their power to direct the future of the Internet. The destiny of the Internet over the next decades, argue Goldsmith and Wu, will reflect the interests of powerful nations and the conflicts within and between them. Well written and filled with fascinating examples, this is a work that is bound to stir heated debate in the cyberspace community.

What listeners say about Who Controls the Internet

Mostly delves into questions of law

I expected this book to "follow the money", and delve into the extent to which the interests of large corporations have molded the evolution of the internet. Instead, this book investigates the legal implications of a "borderless" medium such as the Internet. In other words, how do the laws of one land apply to content that originates in another land? How do companies comply with the variable free speech laws of different nations (China vs. the U.S. for instance).

For me, I found it getting tedious about halfway through. Possibly more interesting to a law student.

The World is Flat?

"The World is Flat" and the "Lexus and the Olive Tree" sought to tell us why the internet would allow national boundaries to fall between countries. Essentially, Tim Wu and Jack Goldsmith explain why this prediction is not coming true. Goldsmith and Wu are two of America's leading scholars writing on cyberspace. Individuals interested in the current state and the future impact of cyberspace would benefit from a reading of their volume. Anyone who thinks that the internet should or can run unfettered -will find this volume an eye opener. The writing is clear and accessible. The reading of Bob Loza is excellent.

Is the World truly flat?

The short book by Jack Goldsmith and Tim Wu "Who Controls the Internet? Illusions of Borderless World" is absolutely a MUST for all who ponder about Internet. It should also be read by all who hold naive concepts about globalization or are sometimes against it.

In essence, it demonstrates, that contrary to popular views, Internet IS controlled by nations states and their policies. What is more, the authors argue, that this control is not only bad thing, not only it is not a censorship, but it is the imposition of law, which benefits the Internet.
The book devotes a lot of thoughts to the initial revolutionary movement for the freedom of cyberspace - the freedom from nation states governments. The analysis of John Perry Barlow famous declaration and Jon Postel ("If the Net does have a G-d," wrote the Economist (1997), "he is probably Jon Postel") fight with US government over the control over DNS.
But the most interesting parts of the book deal with legal aspect of the net. From the initial successful French litigation against Yahoo (for allowing of nazi memorabilia to be sold online by Yahoo), to the incredible Dow Jones vs Gutnick case (won by Joseph Gutnick) we have a spectrum of cases that prove the one simple thing - despite seemingly borderless world of Internet - when it comes to content - it is in fact confined to state borders and their laws !
The analysis of music distribution on the net, from Napster, through lawless Kazaa to Apple iTunes - shows the evolution toward the respect of copyright and its associated laws.
The same conclusion can be drawn when we read about eBay. Here the discovery of the positive effect of legal means of coercion against fraud and indecent hucksters is even more obvious.

On more general level we observe that Internet did not remove the middleman, it just changed it!

As informative as this book is, it's outdated. It was written a few years ago, and the authors never bothered with a second edition.

I have enjoyed listening to this book and have got some good insights about the internet, law, governments, and how companies do business on it. There was also an interesting section on piracy too. Recommended.

Interesting look behind the fog of cyberspace

Very interesting look into how the internet was started, how it operates at its core, and how governments and other institutions can influence what happens on the internet and exert their power in direct & indirect ways that isn't always obvious.

If you read "The World is Flat" by Thomas Friedman, this presents an alternate and complementary view point of the internet and its affects on the world.

Great Introduction to who is in charge of Internet

I have been in IT business for 10 years and i have presented paper on virus and spam in 1999.
I find that I have been outdated and this books shows behind the scenes manipulations on Internet.We might have heard and read about incidents from book but author has managed to keep the right mix of details and gives new information and the non biased analysis is a treat.
This audible will be great for non technical people as it is in easy to understand.
It is great to know where we stand and how free Internet really is , which is not.
The audio quality is amazing the and speaker is great.

Absolutely one of the best selections I've ever made on Audible. From the superlative writing to the exceptionally good narration this book delivers. Anyone with even a passing interest in the Internet will find this intelligent treatment of the subject a rewarding listen. It is indeed an insightful book and I commend the authors for their excellent work. It is deserving of high praise. -Nelson Mullins

If you think "the internet changes everything" you are right and wrong. Gives great insight into how the uncontrollable is managed and controlled.

Good topic and well presented. Tim Wu brings clarity to the issues of Internet Governance and "Internet Control" that are so often bandied about.

OK, but on the light side

If you're not familiar or intimately involved with Internet culture, history etc, then this will probably be an excellent listen, and I would recommend it for you.

However,if you've been a part of the Internet culture for a while, have some reasonable knowledge of its history or are a regular listener of the iconic tech podcasts that always discuss this kind of stuff, then I'm afraid 80-90% of this will be a bit of a recap. Not a bad recap, listenable, not particularly irritating like some books, but a recap nonetheless. There were moments that I found interesting, insightful and thought provoking, so not all repeated knowledge / wisdom, but the writing did on occasion have me cringing with the naivety and Americanitis that seemed to miss the depths of some topics.

All in all, it was OK for me, and would be good for those less familiar with the topic, but I felt it could have been a bit better.