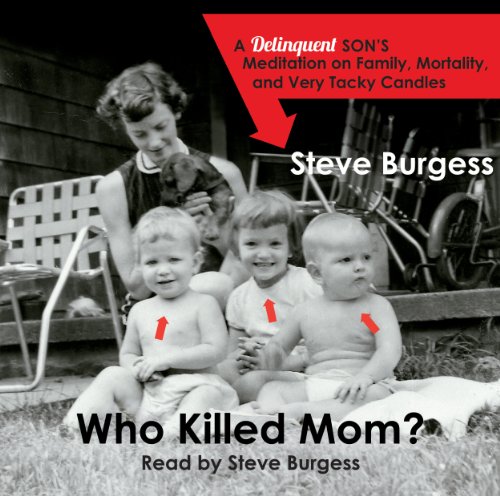 One of Canada's funniest writers tackles his mother's life and death in a profound, entertaining story. Memoir, biography, and outrageous comedy make for a perfect blend in the debut book from acclaimed writer Steve Burgess. Telling the tale of his mother’s life and death, and along the way laying bare his own struggles, Burgess delivers a moving meditation on life and family.

The author's mother, Joan, barely survived her 13th birthday: A rare disorder had made it almost impossible for her to swallow food. Her battle to survive this illness was the first in a lifelong struggle with the demons of her upbringing. As she raised her five children, of whom the author is the youngest, Joan revealed herself to be a strong and remarkably complex woman. This is the story of her family: Joan herself, her husband - a charming United Church minister - and their children, including the alarmingly delinquent Steve.

Who Killed Mom? brims with uproarious anecdotes and one-liners. Whether he's relating how an ice cream product saved him from a gruesome death on the Trans-Canada, sizing up the rebranding efforts of a woeful Manitoba motel, or depicting daily life in a retirement community, Burgess infuses his tales with plenty of laughs. But beneath the book's hilarity is a penetrating examination of eternal themes: family, mortality, fate, and the enduring value of love.

"This is no treacly memoir. Like a Garrison Keillor of the Canadian prairies, Burgess writes funny, unfiltered observations, anecdotes and character descriptions that flow naturally and make for an engaging story of his life to date. His first book is a great effort after almost 20 years in the freelance trenches, a very funny book worthy of a Leacock Medal for Humour. If I could, I'd nominate Burgess and Who Killed Mom? for the 2011 short list. I just hope Burgess has more books on his hard drive to share." (D. Grant Black, Globe & Mail, April 20, 2011)

What listeners say about Who Killed Mom?