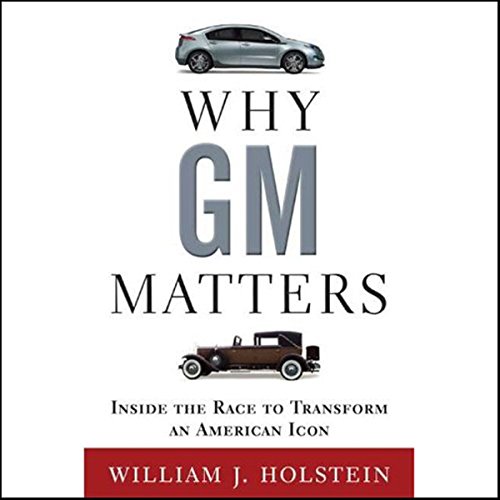 In November, GM CEO Rick Wagoner appeared before Congress to ask for $25 billion to bail out the struggling Big Three automakers. To critics like Thomas Freidman and Mitt Romney, it was a sign that the American auto industry should be led out to pasture; if the Japanese are better at making cars, they said, then we should let them do it. To defenders, the loss of the country's largest manufacturing sector would be an incomprehensible disaster. Nearly every day, the debate rages on the op-ed pages. Billions of dollars and millions of jobs hang in the balance.

In Why GM Matters, William Holstein goes deep inside GM to show what's really happening at the country's most iconic corporation. Where critics say that GM has sat on its hands while the market changed, Holstein demonstrates that GM has already radically retooled its entire operation, from manufacturing and cost structure to design. Where pundits say we'd be better off without GM, he shows how inextricably linked GM and the nation's economy still are: The country's largest private buyer of IT, the world's largest buyer of steel, the holder of pensions for 780,000 Americans, GM accounts for a full 1 percent of our country's GDP. A dollar spent on GM has profoundly different consequences from a dollar spent on Toyota.

Following a diverse cast of characters--from Rick Wagoner, the controversial CEO, to design director Bob Boniface, to Linda Flowers, a team leader on the line in Kansas City--Holstein examines the state of GM's health and builds a persuasive argument that GM is essential to our nation's well-being and, with the right economic climate, ready to compete with Toyota as one of the biggest global automakers.

"At a time when GM and the domestic auto industry are in acute crisis, this book makes sense of what has happened--and what should happen next. Bill Holstein is an extremely knowledgeable and perceptive journalist, and his book is a must-read for anyone who cares about the future of the American auto industry." (Fortune)

What listeners say about Why GM Matters

I found this book boring and tedious to listen to. It sounds more like something written by GM's PR department than an insightful analysis. Most of the folks that the author builds are up are now gone. Yes, it's interesting to learn how sophisticated GM's international collaboration is, but the arguments supporting the title are both simplistic and unconvincing - and they drone on.

Excellent narrative. GM is America and more Americans need to see that. spot on sir