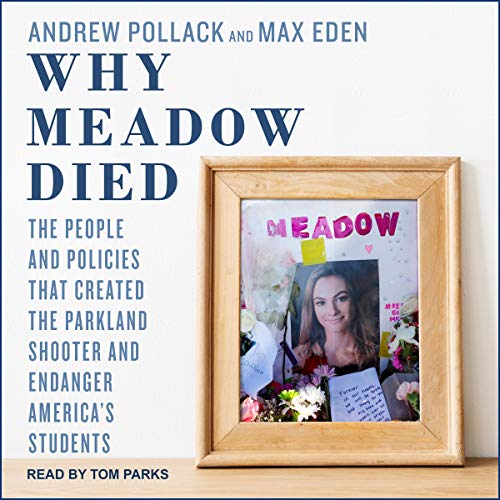 The Parkland school shooting was the most avoidable mass murder in American history. And the policies that made it inevitable have spread to your school.

"After my sister Meadow was murdered at Marjory Stoneman Douglas High School, the media obsessed for months about the type of rifle the killer used. It was all clickbait and politics, not answers or justice. That wasn't good enough for us. My dad is a real tough guy, but Meadow had him wrapped around her little finger. He would do anything she wanted, and she would want him to find every answer so that this never happens again.

My dad teamed up with one of America's leading education experts to launch his own investigation. We found the answers to the questions the media refused to ask. Questions about school safety that go far beyond the national gun debate. And the answers to those questions matter for parents, teachers, and schoolchildren nationwide." (Hunter Pollack, "Foreword")

What listeners say about Why Meadow Died

Stick to the facts

I've worked in law enforcement in South Florida for more than 34 years, so I was particularly interested in this re-telling from the perspective of Mr Pollack. The factual parts of the book were interesting and well-recited; however, this is perhaps a mere 20% of the book. Another 80% of the book is slanted toward Conservative views on Gun Control, Obama era policies, opinion of Mr Pollack on law enforcement strategies (including his opinion that a "warning shot" should have been fired by officers (which agencies strictly prohibit due to the obvious inherent danger gravity presents)), and other similar opinions he holds about police tactics and what went wrong on 2/14/18. This stream of consciousness made listening to this book insufferable for me, at times, and I pushed through hoping for a return to fact and story-line. I can't recommend this book, but I would like to take a moment to say that Mr Pollack and other Parkland parents should be commended for their work in bringing change that include new laws in Florida that tighten school security and better protect out kids, and the removal of a clearly incompetent sheriff. Thank you all, sincerely.

Everyone should read this so heart breaking how it could have been stopped long before it started...... stupid ass Democrats.....

I've had to read this book for an assignment, but upon its conclusion I've decided that I align with what Andrew had to say. I felt that the evidence of corruption behind the scenes of the Broward school district was well presented, although collected primarily anecdotally due to much of the information being withheld or inaccurately reported. The hunt for truth, justice, and accountability is sure to be a long fought battle.

A must read for school administrators

As a teacher this book made me so angry. How the school district and officials treated the teachers before and after the shooting was unconscionable. The end result of their policies is simple. If you want to groom a sociopath into a school shooter , make sure he attends Broward county schools.

loved it. insane story. I've lived through some of these stupid policies and caught the school board with no success.. sadly so much of this book is spot on.. I need to do my research to make sure some of these policies are gone!

this book was so informative that I couldn't put it down. the authors did a fantastic job!

couldn't put it down... every word of it is lived through... I wish this never happened 😔 P.S. I live one block away from MSD High and my oldest graduated in 2013 (pre current administration changes took in affect) my youngest ones and not going to step a foot in broward county public schools

Wow terrifying what is going on.

This book really opens your eyes to what is really going on in the school system and the road we are going down is terrifying.

Thank you for this book Andrew Pollock. I wish all Americans can see the truth by reading this book

Enlightening and powerful message about about how the Parkland School Massacre could have been avoided.