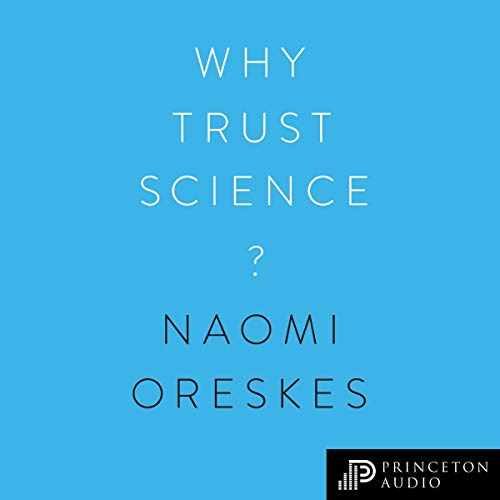 Why the social character of scientific knowledge makes it trustworthy

Do doctors really know what they are talking about when they tell us vaccines are safe? Should we take climate experts at their word when they warn us about the perils of global warming? Why should we trust science when our own politicians don't? In this landmark book, Naomi Oreskes offers a bold and compelling defense of science, revealing why the social character of scientific knowledge is its greatest strength - and the greatest reason we can trust it.

Tracing the history and philosophy of science from the late 19th century to today, Oreskes explains that, contrary to popular belief, there is no single scientific method. Rather, the trustworthiness of scientific claims derives from the social process by which they are rigorously vetted. This process is not perfect - nothing ever is when humans are involved - but she draws vital lessons from cases where scientists got it wrong. Oreskes shows how consensus is a crucial indicator of when a scientific matter has been settled, and when the knowledge produced is likely to be trustworthy.

"Oreskes joins a distinguished line of thinkers who explain why we should trust the findings of the scientific community...[and] clearly reminds readers that science has consistently brought home the bacon." (Kirkus Reviews)

Perfect Production of an Excellent Work

Naomi Oreskes has written two superb books in recent years, both of which have been produced as audiobooks: 'The Merchants of Doubt' and 'Why Trust Science?' Sheila Jasanoff, to whom Oreskes refers in the latter, has also written several excellent similar and complementary recent works, only one of which has been produced as an audiobook: 'The Ethics of Invention'. All are insightful, deeply scholarly works, compellingly argued and evidenced, and extremely relevant for our technologically advanced yet epistemologically uncertain age.

Yet this review focuses on something I hope producers will take note of when it comes to detailed academic texts: the narrator is absolutely key to allowing audiences to understand what may be heavily nuanced, complex arguments. Far more so than in fiction. As I found with Samuel Moyn's 'Not Enough', the narration in Jasanoff's 'The Ethics of Invention' was a hindrance to properly following the text. In 'Not Enough', incorrect inflection and emphasis often changed the meaning of sentences and paragraphs. In 'The Ethics of Invention', the robotic monotone of the narration made the text more challenging to follow than it needed to be, as Jasanoff herself is an excellent writer. Don't let this put you off the book - it is worth persevering with - it's just such a shame as it could have been so much better and is such an important work.

By contrast, this is the perfect example of a production. Female narration for female authors and vice versa (Oreskes presents her arguments then several academics respond). The narration places emphasis where it is needed, gives the topics life and power, and genuinely rewards the listener with a greater understanding of the material as a result.

Academic work needs narrators that truly understand what they are reading, where to place emphasis, how to pronounce technical terminology, and the ability to bring life to complex material. Too many audiobook producers seem not to understand this and I am sometimes left to wonder if they have actually auditioned the narrator at all. Not here - this is excellent.

The Case Is Made For Science

In clear, clean language, Prof. Oreskes explains how the social nature of science at its best makes it the most reliable way yet discovered for improving our knowledge of the universe. Recommended.

Interesting and relevant. Worthwhile read for those interested in how we come to accept a body of evidence as “fact.”

This book is informative, well-argued, and very timely. Its content is intellectually challenging, but it is written in an accessible style and the performance makes it easy to follow. Oreskes offers a compelling case that it is science's social nature which makes it trustworthy.