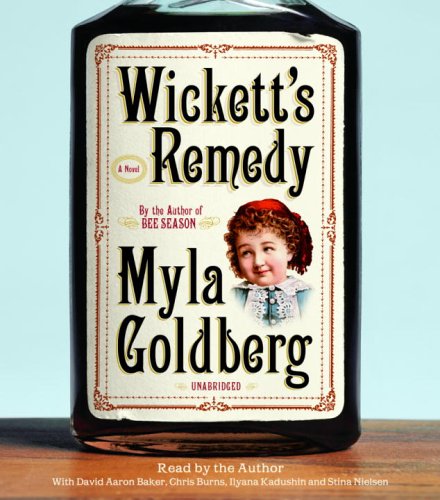 In a multidimensional, intricately wrought narrative, Myla Goldberg leads us back to Boston in the early part of the twentieth century and into two completely captivating worlds. One is that of Lydia, an Irish-American shopgirl with bigger aspirations than your average young woman from South Boston. She seems to be well on her way to the life she has dreamed of when she marries Henry Wickett, a shy medical student and the scion of a Boston Brahmin family. However, soon after their wedding, Henry abruptly quits medical school to create a mail-order patent medicine called Wickett's Remedy, and just as Lydia begins to adjust to her husband's new vocation, the infamous Spanish influenza epidemic of 1918 begins its deadly sweep across the world, irrevocably changing their lives.

In a world turned almost unrecognizable by swift and sudden tragedy, Lydia finds herself working as a nurse in an experimental ward dedicated to understanding the raging epidemic, through the use of human subjects.

Meanwhile, a parallel narrative explores the world of QD Soda, the illegitimate offspring of Wickett's Remedy, stolen away by Henry Wickett's one-time business partner Quentin Driscoll, who goes about transforming it into a soft drink empire.

Throughout the novel we hear from a chorus of other voices who offer a running commentary from the book's margins, playing off the ongoing narrative and cleverly illuminating the slippery interplay of perception and memory. Based on years of research and evoking actual events, Wickett's Remedy perfectly captures the texture of the times and brings a colorful cast of characters vividly to life, none more so than Lydia, a heroine as winning and appealing as Eliza, the beloved spelling champion of Bee Season.

With dazzling dexterity, Goldberg has fashioned a novel that beautifully combines the intimate and the epic. Wickett's Remedy announces her arrival as a major novelist.

"With its warm, involving story line and intrinsically interesting subject matter, this is sure to be popular with the book-club crowd." (Booklist)
"Well-researched, polished, and poignant." (Publishers Weekly)

What listeners say about Wickett's Remedy

I think this book has an interesting storyline but it got confusing to listen to it. There wasn't enough information to let you know "when" each chapter was taking place. I got a little bored with it and feel I missed the sense of the plot and where she was intending to go with it...and it's un-abridged!

I started reading this book in paper format while wandering around B&N one day, and realized about 1/4 through that it would make an awesome audiobook if done well. And what a success! Myla's reading, the hushed asides, the sound effects, and the dramatizations all make this a highly entertaining read. I found it not at all difficult to follow or understand. Ms. Goldberg's writing is divinely descriptive, and her premise is one of the most usual and creative I've yet encountered. Please give this a try! :)

I enjoyed Bee Season and was looking forward to Myla Goldberg's next book, but I did not enjoy this story. I found it quite boring and I still don't understand what the plot was supposed to be. As an audible book I found the parts of the story that were interviews, tours or newsclippings very confusing when they disgressed from the main story. I forced myself to finish the book, but was disappointed that it never seemed to amount to anything.

What made the experience of listening to Wickett's Remedy the most enjoyable?

I had not heard of the book so I had no idea what it was going to be. It is quirky and well written. The first few minutes were a bit confusing with the "commercials" but as soon as you get hooked on the story you will LOVE it.

Have you listened to any of Myla Goldberg’s other performances before? How does this one compare?

I first listened to the Bee Season. It was good, I was a little disturbed by the mother.

If you could take any character from Wickett's Remedy out to dinner, who would it be and why?

I don't know if this question applies. Wickett's Remedy is light and charming, and yet the story is about hardship, disease, deceit... I would take any of the main characters out to a good dinner because they deserve it after what they have been through

I have recommended this book to everyone I know and all of the feedback that I have heard has been much like mine.

Seems like Myla may be trying to be all things to all people? The story lines and timeframe changes interlaced with voices of the dead is hard to follow and then just annoying. Wonder how it translates in print...by the end she really hasn't said much which is a shame because it starts with some promise and clearly the author has done research. Too bad...was just glad to be done with it!

I wanted to like this book because I loved Bee Season, but from the beginning this book and I just did not hit it off. Too many sound effects, music, and cheesy advertisement-like segments, barely a plot thread to follow, and a RIDICULOUS amount of time spent waiting for the obvious to happen. And while Myla Goldberg's voice fits the bill perfectly in her reading of Bee Season, it is totally out of place here.

I am sad to say that I really did not enjoy this book very much. The audio clips of the news reels were funny and well done; but the story was just bland and not very interesting to me.

This really was an odd little tale. Enjoyable, but odd. The central theme of the flu epidemic during 1918 takes a young woman to a marriage, to becoming a widow, to a career of fighting that epidemic. Sprinkled in and out are spots for a soft drink the widow's husband had created.

The characters get confusing as the settings are so diverse. The soda pop vignettes are a bit distracting as they lend little to the main theme.

Overall, this was a pleasant listen. Don't expect much and you won't be dissappointed. but it is nice enough.

Grates on your nerves!

This audiobook tried so hard to be clever that it ended up just grating on my nerves. Where to start? First, the author really should have forked over the money to hire a good narrator. She sounds like a little girl and because she can't do multiple voices, she has had to use other narrators to provide the male voices in the book. The book has a very SLOW plot, such that keeping reading is an effort. The most annoying trick the author uses is contradicting plot events with another voice, such as: (female voice) "Henry spilled his drink on Lydia, he was so nervous." ... then a male voice cuts in with: "Henry remembers that it was Lydia who spilled her drink." After the 20th time this happens, it quits being cute and starts being quite annoying. The book summary describes this device as "cleverly illuminating the slippery interplay of perception and memory." We all know that two people will each remember a past event differently. We don't need to be reminded of this over and over again. Also, the "parallel narrative" of QD Soda is intrusive and commercial-like. It is meant to be coming from the loudspeaker on a tourbus touring Boston, complete with music and sound effects, and is explaining the history of QD soda. It includes the original commercial jingle. Well, guess what folks, when I listen to an audiobook I don't want to hear a commercial, I just want to hear a story! I don't care that this is providing context or illustrating the pervasiveness of advertising of that time. It is annoying! Many books are light on plot because of character development, however, this book is light on plot AND character development. I didn't care one whit about any character in the book. I was actually cheering when one central but irritating character died! Finally, the publisher's summary states that the author put "years of research" into this book. That may be so, but a little more attention to plot and character would have gone a long way toward making this an enjoyable book.

Better as an audiobook

I haven't seen the printed version, but the unique way the audible reading is structured (as well as the competence of the orator) surely makes the listening experience superior to reading it. Though the story changes directions midway through and seems to get lost at the end, listening to it was a pleasure.