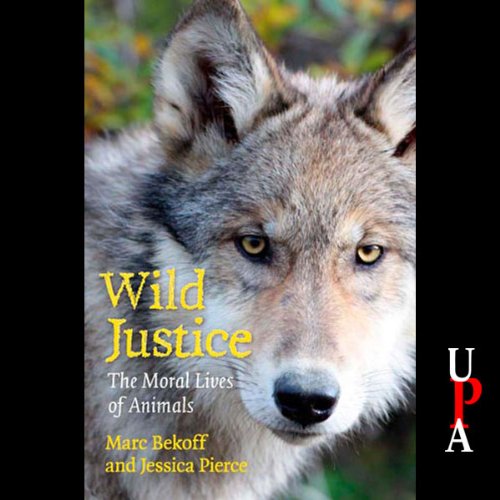 Scientists have long counseled against interpreting animal behavior in terms of human emotions, warning that such anthropomorphizing limits our ability to understand animals as they really are. Yet what are we to make of a female gorilla in a German zoo who spent days mourning the death of her baby? Or a wild female elephant who cared for a younger one after she was injured by a rambunctious teenage male? Or a rat who refused to push a lever for food when he saw that doing so caused another rat to be shocked? Aren't these clear signs that animals have recognizable emotions and moral intelligence? With Wild Justice, Marc Bekoff and Jessica Pierce unequivocally answer yes.

Marrying years of behavioral and cognitive research with compelling and moving anecdotes, Bekoff and Pierce reveal that animals exhibit a broad repertoire of moral behaviors, including fairness, empathy, trust, and reciprocity. Underlying these behaviors is a complex and nuanced range of emotions, backed by a high degree of intelligence and surprising behavioral flexibility. Animals, in short, are incredibly adept social beings, relying on rules of conduct to navigate intricate social networks that are essential to their survival. Ultimately, Bekoff and Pierce draw the astonishing conclusion that there is no moral gap between humans and other species: morality is an evolved trait that we unquestionably share with other social mammals

Sure to be controversial, Wild Justice offers not just cutting-edge science, but a provocative call to rethink our relationship with - and our responsibilities toward - our fellow animals.The book is published by The University of Chicago Press.

"Read this book, share it widely, and incorporate its lessons into your classroom, family room or board room." (Jane Goodall)
"One of the most fascinating - and readable - academic books of the year, this groundbreaking study gathers together some remarkable research about the way animals can show compassion and empathy and even have a sense of fair play." ( Sunday Telegraph)

What listeners say about Wild Justice

What Some Of Us Have Always Known...

My work in greyhound and horse rescue has shown me over the years something very clearly: animals understand a moral act done toward them (rescuing them from rugged and abusive situations), appreciate it, and return the favor in acts of protection, devotion and love. This book covers such aspects of four-legged morality as well as how animals care for, protect and sacrifice for each other. Several now famous studies have shown how voles are monogamous, vampire bats (yes!) practice reciprocal altruism (one bat has a bad night, a bat that had a good night will spit up some of his collected blood into the hungry bat's mouth--and later, the favor is returned when the tables are turned--yummy!), and I can tell you that horses instantly recognize a good person or a cruel one and remember a friend forever...and remember as well those who have done them a wrong turn at some point. From an evolutionary standpoint, it only makes sense. Neo-Darwinian sociologists stand in line these days to write books about how humans developed a sense of morality in order for the greater number of the group to survive due to group protection and caring and justice--why in the world would we think that other mammals had not developed the same tendencies in order to keep their species going as well?!

After thoroughly loving my last non-fiction nature read, I excitedly picked this one up - a book that I have been meaning to get around to for the past six years... I have wanted to read this book so much that I actually have it in hardcover, Kindle and Audible... so needless to say, I have really wanted to read this one...

And I think that may have fed into my ultimate disappointment. The authors spend a lot of time defending their word choices and repeat their anecdotal evidence quite a bit, too. Maybe this wouldn't be as noticeable if I was the sort of reader who set a book aside for days, weeks or months at a time, but in listening and reading to it over a few days, I have to say that I found it repetitive for being so short. What evidence there was that was discussed was certainly interesting, well-presented and definitely balanced, but I just with that there had been more of it! Even the examples were repeated and overall, I just had wanted the book to be more engaging than it was... I wanted more anecdotal evidence as these examples clearly illustrated the authors' main points... I am not sure, the book kind of felt like an overly long introduction without ever really getting "there"... I wish that I didn't have quite so many formats of it... I don't know that I will be re-visiting this one...

Both were not surprising - grateful that the science was broadly covered. Clueless on Morality. Read the new Philosophy of Broader Survival to see why.

Not the only Moral Species!

Fascinating consideration of morality in many mammalian and avian species. Reading it or listening to it will change you!

If you could sum up Wild Justice in three words, what would they be?

I love animals and have been reading up on animal behavior whenever I can. The best thing about this book is that Marc Bekoff and Jessica Pierce does not force their ideas on the reader. Although i share their opinions from the get go, I appreciate how they allowed the case studies, the wolves, apes, mice and coyotes to speak for themselves. You can see from the writing that they genuinely care about the topic at head, instead of just trying to sell you a point. They are able to bring each case study to life, and through relating it back to what we know about humans, allow the reader to truly make connections. Above all, they allow you to decide for yourself if animals really do have morals. Marc Bekoff and Jessica Pierce portray the animals in a way that few other writers on the subject can; and because of this, is able to build a connection between the animals and reader, and constantly have the reader questioning their believes about the subject without making it feel oppressive.

Wasn't what I wanted but was still interesting.

If the person's interest matched the books content I would recommend it. If you are looking for a book on Anthropomorphism I would pass.

That there is some moral code in the animals that were studied for the book.

Have you listened to any of Simon Vance’s other performances before? How does this one compare?

The part about the elephant protecting the injured one.

Beguiling hypothesis, but is it true?

Do animals have a moral sense? I believe we seriously underestimate the sentience and mental capacities of most animals, so I welcome a book such as this, which challenges our anthropocentric prejudices. By making us think, it does a valuable service in raising our awareness.

The thesis seems sensible, that our own ethical sense might not have sprung fully formed out of nowhere, but have evolutionary antecedents in the animal world, especially among highly social animals. This is backed by experimental work described in the book, and numerous anecdotal observations in the wild, such as the mature female elephant who fended off an attack on a hurt female elephant by a younger male, and seemed to tend her wounds with her trunk, or the mouse who feeds and fetches water for another trapped and injured mouse.

However, it was when I tried to find references for some of the experiments that I began to get more skeptical. One that is oft quoted in the book, and echoed widely on the Internet is the alleged experiment where a hungry rat refuses to press a lever to get food, once he realises it causes another rat to receive an electric shock. No references are given in the book, nor in any of the sources quoting this experiment, and I cannot find any information as to the original published experiment. Is it just heresay? Other experiments are referenced, but raise further questions, such as the rat who first releases another caged rat, rather than obtain a piece of chocolate. Were they related, or mates, or total strangers? Were the rats naive or had they done this many times? How had they learned to obtain the chocolate or release the cage door?

The style of narration is clear, somewhat stentorian, and serious, and this is the nub for me. This is a book with a message, a manifesto, who's aim is to convince. What it lacks as a scientific work is a willingness to critique the evidence or search for other explanations than the thesis put forward. However, if it brings the end of inhumane animal experiments a day closer, it will have been worthwhile.

loved listening to this

Really enjoyed this. A nice blend of science and anecdotes. highly recommend if you are into the science of animals!