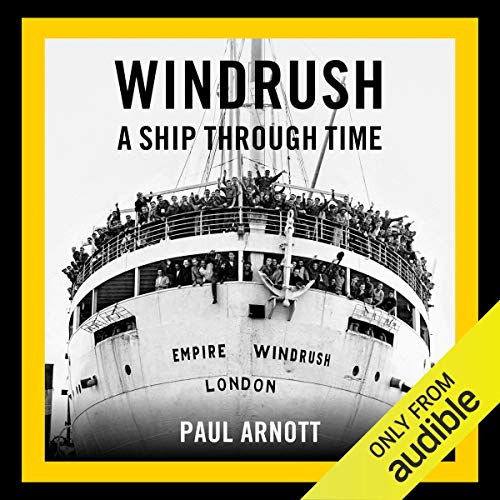 The Soul of a Ship
Written by: Paul Arnott
Narrated by: John Telfer
Length: 8 hrs and 43 mins
Categories: History

For three decades the Windrush was the maritime Zelig of the 20th century, playing different roles in the most turbulent years in modern times. Designed in 1930 in the Hamburg boatyard of a Jewish shipbuilder to ferry Germans to a new life in South America, it wasn't long before Goebbels requisitioned her as one of his ‘Strength Through Joy’ vessels. However, her duties soon darkened: she became a Nazi troop carrier, a support vessel for the pocket battleship Tirpitz and a prison ship transporting Jews to Auschwitz.

Captured by the British in Kiel in 1945 and renamed the SS Empire Windrush, she then spent years evacuating displaced service people and, in her famous single voyage from the Caribbean, she brought the first wave of black migrants to Britain, thus changing the country's ethnic makeup for all time. Windrush: The Soul of a Ship is Paul Arnott’s vivid biography of a unique vessel, combining the memories of people who were there with a gripping account of an extraordinary merchant ship at the end of empires.