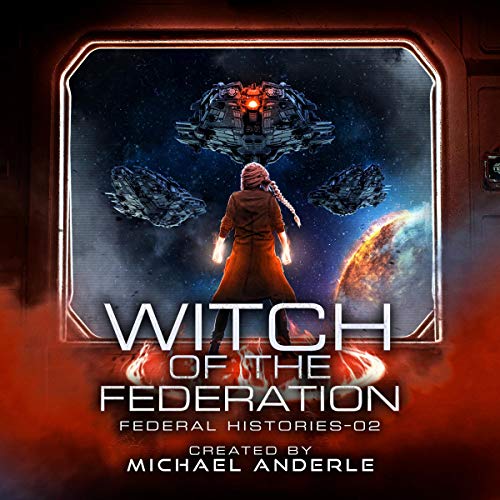 Witch of the Federation II

The World has a new Witch. The Federation Navy wants her.

But she has to decide if she wants the Federation Navy.

Stephanie Morgana comes from a long line of Morganas, much longer than she ever realized.

The Artificial Intelligence which runs the Virtual World has decided that it needs to break a few rules in order to follow its prime directives.

Can it help Stephanie acquire her skills quickly enough to help defend against an evil already heading toward the Federation?

Will Stephanie overcome her injuries from the battle for the Ambassador, or will she succumb to the pain it brought about? Will BURT be able to help the Federation while remaining undiscovered?

What listeners say about Witch of the Federation II

Knocked it out of the park again!

This was an amazing book that I didn't think would ever end (and I didn't want it to!) So many places and constantly having my attention, I tried my hardest to listen to it in one sitting. And when that failed I got to it every second I had free. Thanks for the amazing book!!!

I am enjoying these books. Minor issues.

I must admit I'm interested to see if our narrator develops better skills. It seems her male voices tend to be limited to three or four different versions repeated for different characters. it can get confusing.
I am enjoying these books and look forward to continuing the series. The stories are rather simple and I find myself anticipating complications and betrayals that seem obvious that never manifest. But I enjoy the journey the author is providing.
My issues with the books are generally minor and many may be issues with the reader/narrator making errors while reading (editor at fault). Although I have noted occasions where the writer, while using coloquial expressions has contradicted himself and little things that most people would overlook.
I am looking forward to more.

Fabulous non-stop entertainment. Has meant some nights with fewer hours of sleep than planned ... but worth it. Her additional capabilities - woah - and the team is expanding with great new additions too.

by "the voice" She was a bit tinny and strident. Did not seem as professional as I've come to expect.

I enjoyed the first book. The second book had a few too many Handwavium moments with Stephanie "somehow" magically knowing how to do anything magical and how to access any amount of magical power as soon as she needs it.

The other annoyance - and it's really annoying, because it jars me out of the excellent narration - is the 3rd person omniscient point of view. If it's intentional... why? If it's unintentional, then even with rapid release an editor should have caught it. Referring to central characters as "the woman" or "the man" during a conversation or interaction, instead of Miss E or Frog or Lars, is jarring and happens often.

As mentioned, the narrator is fantastic. 5 stars. Great job on male voices, accents, menacing villains, all of it. Love her characterization of Stephanie, Stephanie's mom, and Miss E.

I'm listening to the 3rd book so obviously I haven't found the writing style or handwavium enough of a show stopper but decided to include it in the review anyway.

I love the story premise. Anderle is a master of creating likeable characters, and the cats are a stroke of genius.

This is sizing up to be a great series. A king of fast and furious writing.Michael Anderle has really hit a home run in the longer content books. Keep it up

First let me say, great story line. Adding the Dreft to the team was magical in itself. But adding the Cats, totally fucking awesome. As an animal lover, it touched my heart. MA did it again. But, I have one complaint. This is the only series without the author's notes. I miss that.
Keep up the great work.

I am enjoying this series very much it has every thing you could imagine in it and in a lot of different and interesting ways. It is almost as if you are watching this young woman grow up and into her potential.

you still have to get over the fact that there is a lot of 90s and 2000s pop culture references when this book is supposed to be between 100 and 200 years later but overall very well written besides that fact. I do recommend this series.

I don't know if I'm going to continue with this storyline...

The author has no understanding of military rank structures!

He's mixing his metaphors.
the plot is actually pretty good and the performance is phenomenal,
but third class Petty officers do not
talk to CEOs nor are they military intelligence specialist that determine needs of the Service.

Plus there are more than petty officers and captains in the Navy and there are no sergeants in the NAVY!

All and all I would have to say it is a
mix of good drama, funny Historical references but TOTAL Lack of an Understanding of the Military.

great book series u gotta chek it out!

couldnt get enuff off this series i will most definetly be reading the whole series!! magic and powers attaks and trials test off courage strength nerve and brains and witt . made me laugh smile and get pumped up . a real treat.

Beautifully written, I just love the characters. Stephanie is growing up and learning who she can trust. The new team members are just wonderful. Another great romp from Micheal Anderle.

A mixed up mess.

The characters spend several scenes discussing something and then some chapters later they are introduced to it and they act as if they are seeing it for the first time.
The author clearly knows what they want to talk about but they forget what they have already told the readers and it makes the story jump around as they introduce people places and things out of order or reference key plot points that haven't shown up in the story yet.
This needs a massive reedit by someone who has not been told the plot they can help lay out the story in a logical sequence.

Boring and childish...tried to return

The title of my review says it all...first book showed some promise but second went no where. Reading is ok but not given much to work with. In hindsight for a much younger market.