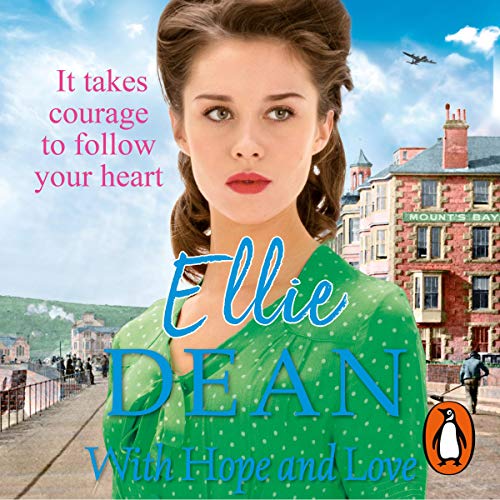 With Hope and Love

The war in Europe is over, but for Peggy Reilly and the residents of Beach View Boarding House the effects of the conflict are still far-reaching.

Cockney evacuee Ivy and her sweetheart, Andy, are saving to get married and fulfil their dream of returning to the East End. But when tragedy strikes, Ivy is faced with a life-changing dilemma that only she can resolve.

Rita also faces an impossible choice when her sweetheart, Peter, proposes and asks her to live with him in Australia - just as her widowed father returns from the fighting in Europe.

Meanwhile Peggy must say good-bye to several of her evacuee chicks whilst she awaits the return of her family from Somerset and the news that her husband, Jim, can finally come home.

It’s a dream she’s held on to for six long years, but fate has one more twist in store.

What listeners say about With Hope and Love

I’ve loved all the books so far and given all 5 stars, except this one because the narrator came nowhere near the quality we’ve experienced and come to expect. I hope Ms Sidaway practices her accents, (oh dear, the Ozzies and Londoners will cringe). In all the other books the beloved characters have come to life because the narrators, Julie Massey and Annie Aldington were professionals with pleasant speaking voices and true regional accents.
I decided to return this listen and read the book instead.

Hope and Love is this story

As always, Ellie Deans latest edition in the Cliffehaven Series is a wonderful story. The author brings previous characters and situations to lovely conclusions. Peggy and her "chicks" have weathered WW2 in their part of England. While not without sadness and pain, they find on VE Day a sense of wonder and hope for the future. The one big negative is the narration. The previous narrative by Julie Maisey was spot on for characterization through voices. This new narration is way below what I was expecting. Ms. Sidaway's characters are stilted and no match to what listeners have come to expect. Hopefully, Ms. Maisey will be onboard for the next installment "Homecoming".

This is my first ever review. Felt compelled to write as the narration of this story is so bad! I love this series of books and eagerly await the next one. This story was every bit as good as the others - well written with excellent historical references and great character development. Unfortunately the narrator made it very difficult to listen to and her attempts at different accents were embarrassing.

It took a bit to get used to this reader but I stuck with it. By the 3rd chapter I decided to listen as if Cordelia were reading. And somewhere along the line I know longer thought about it and was just involved in the happenings with the Cliffhaven family.

Great series, but this narrator is HORRIBLE!

I have loved each of the books in this series until this one. I can't even get past the first chapter the voice is so bad.

I have read and listened to all of the books in this series. Many of the books I have listened to multiple times. I have not been able to finish listening to this book Luckily I purchased the book also so I was able to read the book. I could not follow the narrator. The voices all sounded the same. The pauses did not match the punctuation and the voice was not pleasant. Hopefully the next book will use one of the prior narrators. Again loved the story just couldn’t listen to narrator

I appreciate the pacing, variety of voices and clear diction of this narrator. I hope she is asked to read Dean’s next book.

Worst book in the series.

I have really enjoyed all the 16 books in the series. The stories have been great and hard to but down. After each book I could not wait for the next one. However, having purchased the latest book (17) I can not stand the voice of the narrator. This has really spoiled the whole story as I just can not listen to it and I was so looking forward to buying book 17.

Impossible to give a true review of the story line as I was distracted by the most appalling narration . I was so looking forward to this title coming over to my Library. I just cannot understand why you would change a narrator so far into a series of excellent books . The Irish and Australian accents were almost laughable And the dreadful monotone reading was distracting .
I would recommend that you perhaps read this book rather than listen as I’m sure you will find it much more enjoyable .

I am partially sighted so listen to all the books I read with the Audible app. I have read every one of the Cliffhaven series in this way and have loved the stories and characters. Even though there have been two or three different narrators in the previous books it has always been easy to recognise the different characters so that you know who is speaking at any time. This makes it almost like listening to a radio play rather than having a book read to you, however I was so disappointed with this penultimate book in the series as Marlene Sidaway is a new narrator in these books and there is virtually no difference between how each character sounds to the extent that you cannot tell who has made which comment in a conversation or even if it is a male or female character speaking. The only person who sounded vaguely like they had in the other books was Ron, but when an accent was used mostly it came out slightly American irrespective of if the person was Australian or Irish or Canadian. I do so hope that a different narrator is used for the final book in the series which I am looking forward to very much even though I will be sad at the end as it has been a marvellous series and has kept me entertained and has taught me a lot about things that went on during the Second World War. Thank you Ellie Dean for such an entertaining and interesting series.

I really enjoyed this series however could not take to the storyteller. I much preferred the other readers of the story.

I love the Cliffehaven stories but the chosen narrator really let the story down, my least favourite book out of all of them ☹️

Over the years the narrator has changed several times for this series, this in itself is jarring when you bocome accustomed to one persons interpretation, however so far I have always enjoyed the narration of these stories, until now! A very poor choice of new narrator for this book as ruined it for me, I have tried to listen to it but it is awful so gave up and bought the book and read it the old fashioned way. I am sad at this as I always enjoyed listening to these on a dog walk. I do hope they get julie masiey back on board for the last book!

.… this narrator is just not suitable for the Cliffhaven Series! The different accents needed are just not there and it was a struggle to listen to a very boring and unenthusiastic voice but did continue to the end as I love these stories and prefer to listen rather than sit down and read. It's an escape from doing hum drum jobs like ironing, and getting lost in the story. It makes it a more pleasurable experience. I much prefer Annie Aldington (my favourite narrator) or Julie Maisey. Hopefully one of them will be able to narrate the next book.

The story as usual was Ellie Dean’s brilliant account of the family at Cliffehaven. However the narrator was very disappointing, nowhere near as accomplished as the previous narrators of the Cliffehaven series. I fervently hope Ms Sidaway is not given the task on the final book in the series.

I have listened to all of the Ellie Dean stories so far all been fantastic apart from this one the narrator was awful and did not match the parts as you had expected from the other books in the past.

This book was ruined by the terrible narration but as it was 17 out of 18 books in the series I had to listen ..if it had been the first book it would have stopped me reading all the books ..part of the joy off listening this series has been the wonderful narration which brought the characters to life.. I cannot understand why they would use someone who could not carry this through making it hard to tell who was speaking .. i suggest that it needs to be re recorded using someone who can actually do all the various accents which gives this story such character.
However I would recommend the whole series to anyone and maybe read book 17 yourself!!!!!

As an Aussie I cringed at the narrator's attempt at an Australian accent with Peter, the Aussie soldier. She sounded like a Texan. Penelope Freeman and Julie Maisey do a much better job, for Brits!

I read the 17 books from this series and loved them. My only complaint is to use the same narrator for all of the books.

Just as wonderful as the other books in the series

**I am reviewing the audio version of this book**

I am not sure what else I can say about this series of books that I haven’t already said. This book was just as wonderful as the other books.
Every time I read another book in this series, I become so engaged with the characters that I feel like they are real. I don’t know how Ellie Dean does it, but she takes the reader from Tragedy to laughing out loud effortlessly.
The Narration was good, although throughout the series, I did get used to Annie Aldington and Julie Maisey. Once i got used to the current Narrator’s voice though, it was all good.
.
A friend made the comment that when she’s finished one of the Cliffehaven books, she has trouble getting in to another book, because they are that good. I have to agree. The whole series has had me hooked from start to finish.
I am going to be very sad when this series is over.
I don’t usually reread books, but I would definitely consider rereading this series in the future.
This series I feel is best read in order, although they can be read as stand alone.
Would highly recommend.

hated the reader, so dissapointed as I did enjoy the series. everyone sounded the same