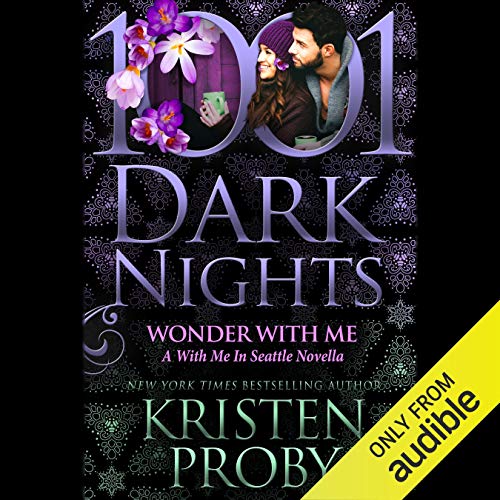 1001 Dark Nights (With Me in Seattle Novella)
Written by: Kristen Proby
Narrated by: Lee Samuels, Joan Delaware
Series: With Me in Seattle
Length: 2 hrs and 37 mins
Categories: Romance, Contemporary

From New York Times and USA Today best-selling author Kristen Proby comes a new story in her With Me in Seattle series....

Reed Taylor doesn’t pay much attention to the holidays - until he receives a surprise present. Four-year-old Piper is the daughter he never knew about, and with the death of her mother, is also now the roommate he never expected. He’s determined to make their first Christmas together one she’ll never forget.

Noel Thompson has gotten her share of strange requests in her career as an interior designer. The call to design a beautiful home for Christmas is more like a dream come true. And that was before she met her new employer - sexy and mysterious, he’s everything she ever hoped Santa would bring her.

As Noel showers his home with holiday spirit, Reed showers Piper with love. And the busy life he’s created for himself no longer seems nearly as important as the one Noel is helping him build with his daughter. But if he can’t convince his decorator to stay, this could be the only year he feels the true wonder of the season.

Every 1001 Dark Nights novella is a stand-alone story. For new listeners, it’s an introduction to an author’s world. And for fans, it’s a bonus book in the author’s series. We hope you'll enjoy each one as much as we do.

What listeners say about Wonder with Me

This book was short but cute and sweet. It didn’t really feel rushed either when novellas can. I liked the tie to the sisters story too! Love this whole series. The narrators were good but not my favorite. Lee Samuels I will happily seek out more of. Joan Delaware has a lovely voice but she’s just not my style.

There is nothing better than Kristen Proby’s with me in Seattle series and this edition did not disappoint. Reed Taylor and Noel Thompson have great chemistry. Who can’t love a unknown child story and Piper is too cute. I could not put this story down and not root for the three of them. Of course seeing people from other books is always a bonus. I LOVE this series and I highly recommend reading this and every book from this series even though you don’t have too.

Sweet Christmas story but too short

Part of the Seattle with Me series. This one is about Noel, Joy the Vet’s sister and a single former workaholic who has recently discovered he is a dad of a 4 year old girl. Instant attraction that quickly develops into love. Wish it was a bit longer but hopefully they will appear in future stories.

I really enjoyed this short story in the With Me in Seattle series. As usual, Kristen Proby writes such heartwarming stories. In this one, Reed suddenly finds himself a father to his four year old daughter that he didn't know existed but he falls in love with her immediately. He hires Noel's company to decorate his house for Piper. He has an instant attraction to Noel and she to him and Piper. There isn't a lot of angst in this novella and the story moves right along without leaving me feeling like I have missed anything. We get to catch up with a few of the couples from previous stories. I'm looking forward to the next book in this series. Lee Samuels and Joan Delaware do a wonderful job of narrating.