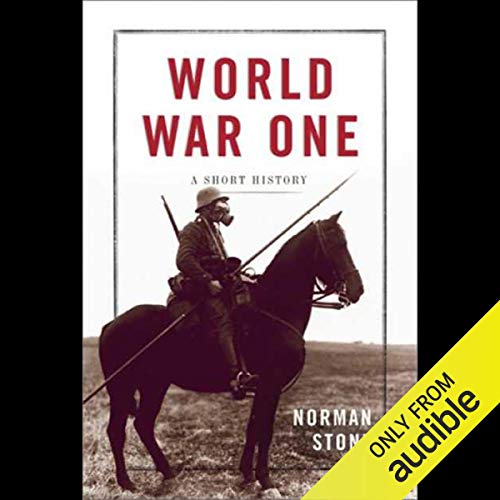 In 1914, a new kind of war came about, bringing with it a new kind of world. World War One began on horseback, with generals employing bayonet charges to gain ground, and ended with attacks resembling the Nazi blitzkriegs. The scale of devastation was unlike anything the world had seen before: 14 million combatants died, a further 20 million were wounded, and four empires were destroyed. Even the victors' empires were fatally damaged.

An overwhelming disaster from which the world is still recovering, World War One can seem baffling in its complexity. But now Norman Stone, one of world's greatest military historians, has composed a dazzlingly lucid and succinct history of the conflict. Stone has distilled a lifetime of teaching, arguing, and thinking into this brisk and opinionated account of the fundamental tragedy of the 20th century.

"Stone is as unconventional as he is brilliant, and this provocative interpretation of the Great War combines impressive command of the literature with a telling eye for relevant facts and a sensitive ear for telling epigrams." ( Publishers Weekly)
"[Stone] examines the broad canvas of the war, taking us from 1914 to 1918. He describes, often quite vividly, the armies of the Central Powers and the Allies as they slog across the fields of Flanders and northern France, through the morass of the Balkans, across rivers and over mountains in Central Europe, chewing up farms and villages, not to mention millions of lives, in the process....There are lovely images, adroit turns of phrase, flashes of wry British wit, amusing details." ( The New York Times Book Review)
"Stone is able to pack an enormity of information into the smallest space, and with a remarkable eye for detail....The wonder is that Stone is able to create a narrative of this sweep and brevity while also providing such evocative descriptions." ( The American Spectator)
"Stone's book is a special pleasure - a concise, pithy mix of fact and judgment." ( Dallas Morning News)

This is a great "read": the reviews that describe it as surprisingly chock full of information, given its narrative grace and its length, are right on target. Simon Prebble does a good job presenting the narrative. You won't find a more comprehensive four-and-a-half hour account anywhere. Overall, very satisfying. The one thing missing are the maps. Maybe it's just me, but I can't read (or listen to) a description of a battle without looking at a map. Fortunately atlases of World War One are easy to come by, and I recommend having one at hand for this.

Exactly what I wanted

I've read dozens of books about WWII and the Civil War, and still have only scratched the surface of those two great conflicts. There are practically no audiobooks regarding the first World War. I liked that this book was short, and found the narration absolutely perfect. You will not come away from it knowing what Franz Ferdinand's favorite fruit was, but you'll at least understand the basics of this conflict and a bit about all the mistakes everyone made. Don't get this book looking for depth, but you get what you get with 4 hours of audio. This is a great book for exactly what is intended- an overview, a timeline, and the parties involved.

As a student of history, the First World War is my favorite topic. Norman Stone is an excellent historical scholar on this topic. His book "The Eastern Front" (not available in audio) which discusses the Eastern Front in World War One is a bible for people like me. This book provides an excellent concise overview of the war in a very well written and organized volume. If you have never listened to any books regarding the topic and want to understand this period in history, this book is where you should start. There are some small historical errors but these do not detract from the narration and content. Overall a great addition to the Audible Library

At a bit over four hours, this is a short introduction to the First World War but it's surprisingly comprehensive, giving an excellent and well-rounded view of almost every facet of the Great War. Particularly interesting was the opening chapter on the complex chain of circumstances leading up to the war- listening to it one gets the impression that at the end of the long 19th Century everyone in Europe was trapped in a strange web of politics and economics making the war almost inevitable. Well narrated and easy to follow.

A very short summary of WW1, with emphasis on the battles. I'd guess that it's fine for listeners who already have some background, but I found it hard to follow. As one reviewer already wrote, you need a map to make the account coherent. The book is more suitable as a quick review for those who've already studied the war than as an introduction to it.

Simon Prebble is, as always, a satisfying narrator.

a good, indepth overview of the european war

this book is great for those who want an in depth yet shortened down version. For those wanting to dig deeper though it's not ideal seeing as it focuses on Germany, Russia, France (i.e the biggest countries) then again, for such a short book it pulls it of masterfully!

the story is sometimes hard to follow with all the different years being bounced around. it highlights so much that it can be difficult to understand what year your in but gives good information over the war.

I was looking for a synopsis of World War I to fill a lot of gaps in my knowledge and happened upon this Audible version. It's probably a 4-star or 5-star book as such, but without the maps of the print edition and without being able to see the spelling of people's and places' names, the Audible version is extremely hard to follow. The writing however is very good and I'm buying the print edition now so that I can get more out of it.

I did not finish this audio book for it was dry and to hard to follow. It seemed more like reference material.

I’ve always found the first world world confusing. This pacy overview clarified much of my confusion and also presented useful information about the Eastern Front which is often overlooked by U.K. accounts of the conflict. I listened to it over the course of two days - it was riveting, never dull or overly technical. Well worth a listen.

This book is a quick and informative introduction to the First World War. A good listen

No, impossible to listen to being read at that speed.

No, definitely not, couldn't finish it because the narration was so exhausting.

A masterpiece of concise writing

Norman Stone's history of the events leading up to the First World War and the course of the war itself is a masterpiece, selecting the core facts but at the same time taking in the whole sweep of the war. The only theatre not covered is Africa, but then that was a sideshow. His judgement of British generals is perhaps harsh; the British Army was essentially a colonial army and had it not been for the work of Haldane and Gen Haig in the years leading up to the war it would have been even less prepared for a campaign in Europe. Although Foch was made supreme Cmdr, it was the British Army which finally broke the back of the Germans on the Western front.