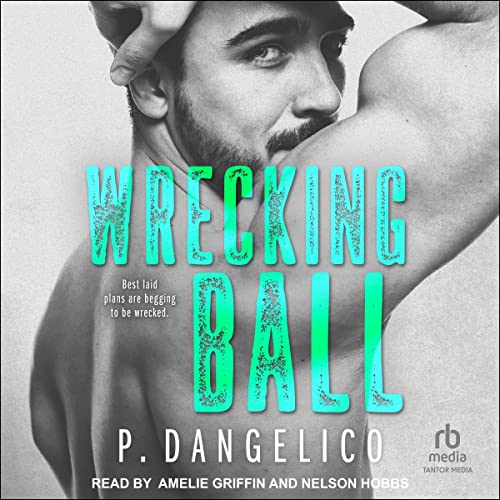 Cam DeSantis's life is a mess. How else would you describe losing your husband, your job, and your money all at once? Desperate times call for desperate measures.

So when salvation comes in the form of one intolerable jerk, who just happens to be the starting quarterback for the vaunted New York Titans, she has no choice but to accept his offer as a live-in nanny slash teacher for his eight year old nephew.

Now all she has to do is find a way to ignore him for the next three months. Which is easier said than done.

Wait, wait—let me rephrase that. He loves women, he just doesn't want anything to do with 'um. What he needs to do is focus on winning another Super Bowl before he retires.

Problem is, the woman living in his house is a major distraction. And he doesn't know what's worse: that he promised to be civil, or that he's attracted to her.

What listeners say about Wrecking Ball

I thought this was pretty good story. I bought this bc I love both readers. After reading the summary, I decided to buy it. I wasn't disappointed with the story. However, I thought this was dual POV since Nelson Hobbs was listed as a reader. He read the last epilogue and that's it. That said, female reader did very good. I have no complaint on her part. All in all, I still recommend.

THIS IS 1 OF MY FAVORITE ROMANCE EVAH!!!

CAN'T TELL YOU HOW MANY TIMES I'VE RE-READ IT 😍
SO HAPPY IT'S NOW IN AUDIO ❤️
CONGRATS P. Dangelico Author 🎊