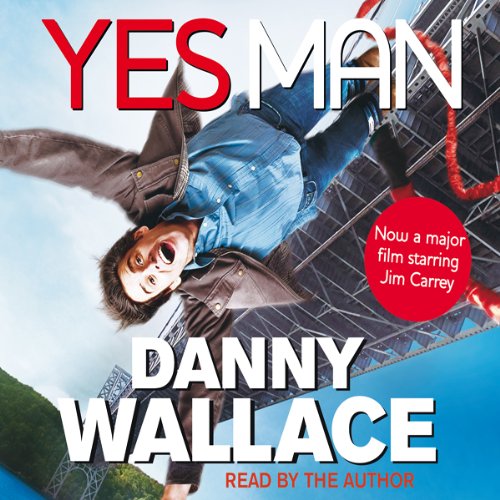 'I, Danny Wallace, being of sound mind and body, do hereby write this manifesto for my life. I swear I will be more open to opportunity. I swear I will live my life taking every available chance. I will say Yes to every favour, request, suggestion and invitation. I WILL SWEAR TO SAY YES WHERE ONCE I WOULD SAY NO.'

Danny Wallace had been staying in. Far too much. Having been dumped by his girlfriend, he really wasn't doing the young, free and single thing very well. Instead he was avoiding people. Texting them instead of calling them. Calling them instead of meeting them. That is until one fateful date when a mystery man on a late-night bus told him to 'say yes more'. These three simple words changed Danny's life forever. Yes Man is the story of what happened when Danny decided to say YES to everything, in order to make his life more interesting. And boy, did it get more interesting.

This is the tie-in audiobook that goes with the 2008 film of the Danny Wallace book - Yes Man - starring Jim Carrey and Zooey Deschanel, which is being released by Warner Bros in December 2008.

What listeners say about Yes Man

good listen but missing chapters from the book

quite disappointed read this book before and thought I'd listen to it while I'm driving around. i was surprised that many chapters are missing from the book. alot of the details in the book that a missing from this make up for really enjoyable story..

this book is great! I really love the concept and want to give it a go.

Great listen. Very funny and interesting story. Good to have the author read the book, its also read very well.

Buy the book instead

manages to be both funny and inspiring

Have you listened to any of uncredited’s other performances? How does this one compare?

The whole thing inspired me to say yes to a few opportunities I would normally turn down.

Unfortunately the abridged audio book cuts out loads. I bought this as I had enjoyed the original book a while ago and wanted to hear the story again without taking time to read the whole thing. There is so much good content cut though. Some of the stuff that is cut is so essential to the main plot too. They even changed a big part of the ending. Buy the book instead!

I bought this audio book in preperation for watching the movie with my wife.
I listened to the book over a few days when I was working away from home, staying in hotels...
It is amazing, there are so many things in the book that everyone will relate to.

I was so so so excited when i went to see the movie with my wife after hearing this great book.
The movie is good, but it is incomparible to the genius that is this book.
I recomend everyone gets this book. It is 10000% better than the movie!

Thinking of getting it? Say yes

Laughed all the way through, and looked like a mad man in public. Film is different and good too.

Firstly, I want to say that this book is at times quite witty and well read. However, I do not agree with other reviewers that it was a 'life changing' experience or anything close. The whole book can be summed up in the mantra that the book itself states so frequently - 'say yes more'. If that advice is life changing than I must be missing something.

I did enjoy parts of the book, but other parts were slow, repetitive and fairly predictable. The fact that this is supposedly a true story gave it some interest, but ultimately I found it quite a laboured journey and one that was fairly un-satisfying in the finish. I suppose if it actually was a true story than that is why nothing more incredible happened. I was expecting something more akin to 'The Dice Man' by Luke Rhinehart (an excellent read by the way).

Anyway, to sum up - it is an OK book. (It passed the time on a long drive to Scotland in my case.) However, I would not really recommend it. Sorry Danny, but it?s a Maybe from me rather than a Yes.

Not life-changing but a nice listen

I feel a bit left out of the hype, as when I told my friends that I was listening the this book the other day, they all started ranting and raving about how 'life-changing' and profound it is, although I didn't find it so significant...perhaps because I generally say yes to most things anyway, as long as they sound like fun!

However I did find it a gentle and easy listen, read well by the author and with some moments that made me smile and even laugh.

The audiobook's heart is definitely in the right place and its principals are wonderful, although I just felt there was something missing somehow...though every listener would definitely do well to take away the ethos of this audiobook and start to smile, perform random acts of kindness and declare a big fat YES more!

I just loved this book. it made me laugh put loud numerous times and has inspired me to say yes more. Well done Danny.

A fun story with a point to make

Yes it’s a bit of lighthearted fun and takes the concept further than most (although in my opinion he could have gone further); but it has a serious message for those who don’t take enough risks, even seemingly small decisions, saying yes more, can set you on a more interesting course and maybe change your life forever. Or maybe not…

I like it when creators take a seemingly silly idea and run with it to see where it takes them; like Meet Dave Gorman or Danny’s attempt to create a country.

As a shorter book this one is just right for a few hours in the car or doing a chore, and left me in a good mood.

This is an abridged tie in with the Jim Carey movie. Really disappointed, I got this for my book club and I’m missing half the book.

One of My Favourite Books

I read this many years ago and it was an inspiration. OK I didn't say Yes to everything as DW portrays, but I did, as the man on the bus said, say Yes more.

And later there's the Jim Carrey film of the same name. Behind the humour there is the same message.

Read or Listen to this and try saying Yes more. it does wonders

Loved the book from start to the end. Takes you through a roller coaster of emotions.

I have read this book at least 5 times and now listened to it on audible. It changed my life and I will forever thank Danny Wallace. He is a LEGEND.