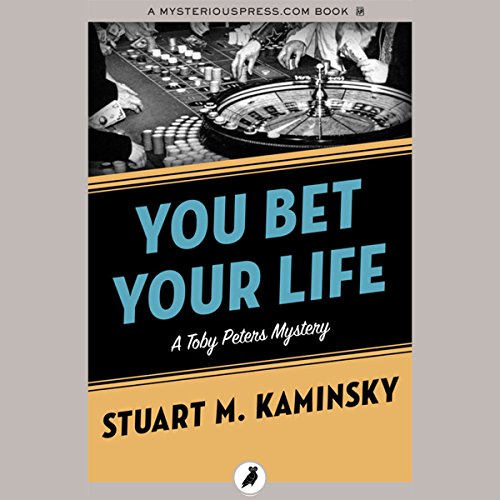 You Bet Your Life

Toby Peters goes to Chicago to clear up a famous comic's gambling debts
There's nothing funny about the package that comes for Chico Marx. It's a severed ear, a simple message from a Chicago bookie who wants $120,000 from the world-renown Marx brother. The strange thing is that, though Chico likes to gamble, he hasn't been making bets in Chicago. Terrified, he goes to the studio for help. Louis B. Mayer, king of Hollywood, places a call to Toby Peters.

Peters's first lead is promising. Traveling on the studio's dime, he makes his way to Florida where he gets an interview with Al Capone, deposed lord of the Chicago underworld. The retired bootlegger's mind has gone soft, and he doesn't know anything about Chico's bookie, but he suggests Peters speak to his brother. With Scarface's good word as an introduction, Peters goes to Chicago, where it will take more than a good sense of humor to keep the Marxes from getting axed.

What listeners say about You Bet Your Life

I thoroughly enjoyed this Toby Peters issue and

I thoroughly enjoyed this Toby Peters issue and the narration from Jim Meskimen. The down on his luck, ex cop turned Private Investigator struggles to unravel a con involving Chiko Marx and the Chicago Mob. His investigation sees him robbed, threatened, beat up and shot. It also brings him into contact with Al Capone and his brother, Ian Fleming of British Naval Intelligence fame, various other Mafia members and the Marx brothers as well as a crooked cop. A top shelf effort and I am looking forward to the next in this series.