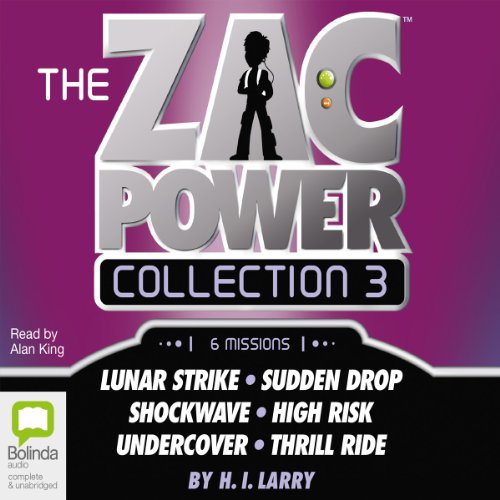 "Undercover": There's a double agent working at GIB! Zac Power must go undercover to stop the theft of all the GIB's most valuable secrets and gadgets! Can Zac find the double agent before GIB is destroyed?

"Shockwave": GIB has received a mysterious ransom note - pay $500 billion or a purple diamond LaserBlaster will be used to destroy all mobile networks around the world! Zac doesn't know who, where, or how, he just knows when. He has 24 hours to save the world....

"High Risk": When the Prince of the remote Hidden Kingdom is kidnapped, it's Zac Power to the rescue! But the kingdom bans all modern technology. How will Zac manage without his cool spy gadgets?

"Sudden Drop": When BIG hijacks a secret water supply, Zac Power faces yet another dangerous mission. But to rescue the water, Zac has to find it - in the middle of the harsh outback and protected by some of BIG's deadliest defence systems yet.

"Lunar Strike" Zac is rocketed into outer space to stop the sabotage of a charity rock concert. An enemy agent is out to steal billions of dollars in donations, and will stop at nothing to get them. This is Zac's toughest mission yet - can he handle the pressure?

"Thrill Ride": At the world's scariest theme park, Zac uncovers a plot that's even more evil than the roller-coaster. Can he brave the rides and find out what's really going on at Shark Park?

This was a great book for me.

Really good problems and characters. I really like this book!

this book kept my son busy for hours, he listens to the stories over and over again.

My boys (aged 5 and 7) love Zac Power. This is the third collection I've bought and it didn't disappoint. In fact, I think there are more sound effects with this collection that ever before - which certainly ads another level.

While I am starting to find the plot lines a little samey, and am getting annoyed about the fact that that the evil B.I.G. foundation seems to be staffed entirely by bad girl spies (grr feminism outrage), the boys completely love them.

The gadgets are fantastically cool, as is the level of authority with which Zac Power is allowed to operate. The idea that a 12 year old can drive a fighter jet / power boat / submarine / space rocket ON HIS OWN and SAVE THE WORLD is exactly what any 7 yr old boy wants to hear about.

I love the fact that no matter how cool you are, you still have to come back home and clean your bedroom. But that's the mum in me.... no bad words, mild peril and the books are available in our local library.