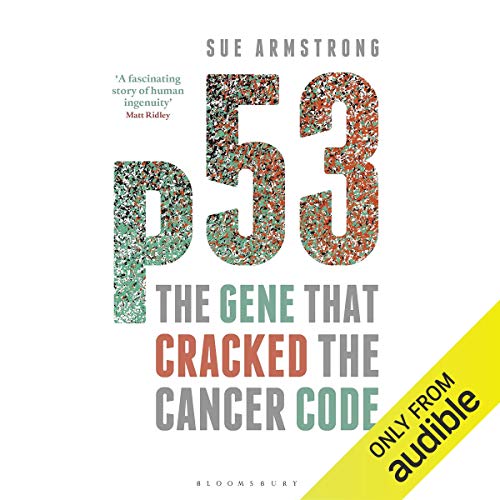 All of us have lurking in our DNA a most remarkable gene. Its job is straightforward - to protect us from cancer. This gene - known simply as p53 - constantly scans our cells to ensure that they grow and divide without mishap, as part of the routine maintenance of our bodies. If a cell makes a mistake in copying its DNA as part of its process of division, p53 stops it in its tracks, sending in the repair team before allowing the cell to carry on dividing. If the mistake is irreparable and the rogue cell threatens to grow out of control (as happens in cancer), p53 commands the cell to commit suicide. Cancer cannot develop unless p53 itself is damaged and malfunctioning.

Not surprisingly, p53 is the most studied gene in history. This enormously important gene has teased the minds of some of the most colourful and ambitious scientists around the world. These characters populate Sue Armstrong's book p53: The Gene That Cracked the Cancer Code, the story of medical science's mission to unravel the mysteries of this gene and to get to the heart of what happens in our cells when they turn cancerous. p53: The Gene That Cracked the Cancer Code reveals the tale of the search for this gene, as well as the excitement of the hunt for new cures - the hype, the lost opportunities, the blind alleys, and the thrilling breakthroughs.

As the long-anticipated revolution in cancer treatment tailored to each individual patient's symptoms starts to take off at last, p53 is still at the forefront of the game. This is a timely tale of scientific discovery and advances in our understanding of a disease that still affects more than one in three of us at some point in our lives.

What listeners say about p53: The Gene That Cracked the Cancer Code

Where does p53: The Gene That Cracked the Cancer Code rank among all the audiobooks you’ve listened to so far?

Excellent story and well researched. Unfortunately at the beginning the narrator was so annoying that I almost stopped listening. I have purchased over 500 audible books and have never had such a reaction to a narrator. But the story was so good that I continued listening. As the story progressed, the narrator improved. If only she narrated as she did in the middle and end this book would've gone all five stars

It's thorough and interesting research. It was not dry – – it was engaging.

Who would you have cast as narrator instead of Elizabeth Jasicki?

If you're all interested in biology, genetics, cancer research, life-sciences you'll enjoy this book--it is worth your time. I would have enjoyed hearing whether the author had recommendations for the public at large.

One of the best medical Audiobooks ever!

I recommend this to any health care provider who takes a family history. Listen to the chapter on Li-Fraumeni. An excellent work!

A must read after Emperor of all Maladies

I read (listened) to this book after finishing Emperor of all Maladies. I've learned so much from both books, and as a non scientist, haven't felt overwhelmed by the subject.

I will listen to this again, so to understand how Li-Fraumeni Syndrome impacts my immediate family.

For scientific or medical backgrounds

If you love medicine or cell biology, this kind of story gives you historical insight into recent scientific work (well, last 30 years). If this is the kind of topic you find interesting, I think you'll enjoy this book.
I wouldn't recommend to most listeners... But I think the title helps to weed out those who would find this subject overwhelming or boring.

I thoroughly enjoyed the well written book as well as the narration. I can recommend ir