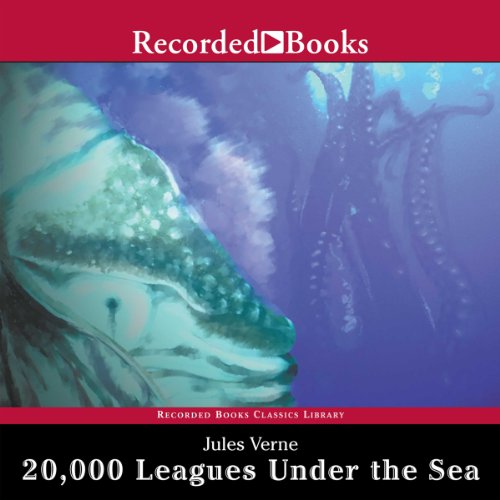 Professor Pierre Aronnax and his faithful servant, Conseil, embark on an amazing journey in Captain Nemo's Nautilus in Jules Verne's classic novel, 20,000 Leagues Under the Sea. While a hostile, relentless band of civilians pursue Nemo, Aronnax is astounded by the secret world of undersea life that surrounds Nautilus' massive observation windows. As they descend further beneath the polar icecap, toward the ocean's farthest depths, the crew encounters drowned cities, giant squids, and more mystery than they ever fathomed. First published in 1870, Verne's masterpiece remains one of literature's great adventures, as well as a seminal work of science fiction.
Public Domain (P)2001 Recorded Books

Jules Verne’s classic gets a stirring performance by audiobook veteran Norman Dietz. Dietz takes listeners on a wild ride as an expedition of scientists begins a journey to discover what ripped a hole in the hull of the Cunard ship Scotia. As they travel to the polar regions where an alleged sea monster is decimating ships, Dietz keeps the pace upbeat. Dietz’s voice creates clear portraits of the members of the expedition and paints vivid pictures of their encounter with the mad genius Captain Nemo, his incredible vessel, the Nautilus, and the beauties of the world beneath the sea.

What listeners say about 20,000 Leagues Under the Sea

I call this the "sinister" translation of "20,000 Leagues." I first ran across it in an old blue-bound Collins Classic, the translation unattributed but the volume sporting attractive line drawings. (I've since heard that it was translated by Henry Frith, but I don't know the details.) It's actually still available as an ebook from Collins.

But why sinister? Because when Aronnax discovers a shell whose whorls go to the left rather than to the right - apparently an event as rare as a black swan - he exclaims to Conseil: "It's a sinister shell!" - "sinister," of course, being Latin for "left-handed."

That illustrates one of the problems of the translation. It's unusually complete - for a 19th century translation of this book - but it's sometimes worded awkwardly, with a preference for literal rather than idiomatic turns of phrase.

Some of those turns of phrase obscure quite a bit. One of the howlers - familiar to Vernians from the more frequently reprinted translation of Lewis Mercier - has Aronnax returning from "the disagreeable territory of Nebraska." A translator more attuned to colloquial speech would realize that Verne was talking about the Badlands.

Still, awkwardly worded though it is at times, it's reasonably accurate; and it has the advantage of having one of the audiobook world's best storytellers, Norman Dietz. Dietz has a way of "spinning a yarn" that fits this epic adventure very well. His voice is at times unfashionably breathy, but like Anthony Heald, he has the knack of sounding like he's making the story up as he goes along.

So it's a bit of a wash. The translation gets a C, the narration gets an A. Listen to the sample and see which is more important to you. First time listeners of Verne might be better served by the F P Walter version, read by Peter Hunsmann, or the Anthony Bonner version, read by James Frain. Neither of those narrators are as congenial to me as Dietz, but check them all out.

(If you decide to go with this, here are a few of the more obscure terms to watch out for. "Sinister" means left-handed, as already noted. "Carbonic acid" is carbon dioxide. "Azote" is nitrogen. "Cachalots" are sperm whales. "Poulps" are squid. "Secretary of Marine" means "Secretary of the Navy." And the "sonorous stroke" that Ned Land's harpoon makes might be more colloquially rendered as a "ringing sound.")

Whatever you do, avoid the audio versions that use the Mercier version. It's easy to recognize: it starts out, "The year 1866 was signalized by...." As soon as you hear the word "signalized," put it back on the shelf and move on. However good the narrator, you won't be getting Verne.

A book I have wanted for a long time

I have wanted to reed this book for a long time. And now that I have heard it I love it. It really is one of the better books I have heard. The relationship between the characters and the science in the story is fun some of it is wrong, and we can prove it today, but it was facts when the books where realised.

Mild spoilers if you don't know the first thing about the story.

A classic, certainly. It is also one of a few of Verne's books that feel like some token narration sprinkled on passages taken from an atlas, a survival guide, or an engineering manual. 20,000 Leagues in particular often seems like a fish spotter's log where the narrator, a professor of marine biology, meticulously takes note of each fish he encounters, complete with longitude, latitude, and latin name, while traveling aboard the famous Nautilus submarine. This may make sense within the story, but does not necessarily make for great reading unless one generally gets very excited about fish. The first time reader is also advised that Captain Nemo largely remains mysterious throughout this novel; to learn more about him, reading the Mysterious Island afterwards is required. (That, or Wikipedia. As that goes, this is a "cork-jacket" translation, see ibid.) The other characters remain equally undefined - the professor, who likes to watch fish and is in no hurry to leave the Nautilus; harpoonist Ned Land who likes fish (with a nice sauce) and is considerably less excited about the involuntary trip; Conseil, Verne's stock character of the faithful assistant / manservant; and lastly, the crew of the Nautilus, which has neither name nor face. It follows that with its lack of female characters, the novel fails the Bechdel Test utterly.

From the samples, I prefer this voice talent to Audible's other offer, and I don't regret my decision. It's worth noting however that in two places, the audible warbles as if transferred from an old tape, but aside from those relatively brief hard to understand spots, it seems acceptable.

Of the Verne novels I read as a kid, this is the only one I gave up on, and having finished it now, I can forgive myself. For all its wordiness, it doesn't give us a lot of story, nor characterization, nor, surprisingly, a lot of detail about the fabled nautilus.