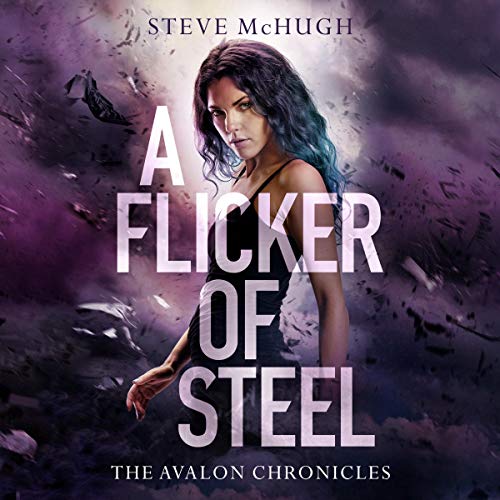 Avalon stands revealed, but the war is far from over. For Layla Cassidy, it has only just begun.

Thrust into a new world full of magic and monsters, Layla has finally come to terms with her supernatural powers - and left her old life behind. But her enemies are relentless.

Sixteen months after her life changed forever, Layla and her team are besieged during a rescue attempt gone awry and must fight their way through to freedom. It turns out that Avalon has only grown since their last encounter, adding fresh villains to its horde. Meanwhile, revelations abound as Layla confronts twists and betrayals in her own life, with each new detail adding to the shadow that looms over her.

As Layla fights against the forces of evil, her powers begin to increase - and she discovers more about the darkness that lies in her past. As this same darkness threatens her future, will she be ready to fight for everything she holds dear?

What listeners say about A Flicker of Steel

GREAT narrator! Loved the twists and turns, and can’t wait to see what happens in the next one!

what a great narrator! she really brings the story to life and is great at differentiating between all the characters. hopefully she stays on this set of the series for Laylas arc.

Another good edition to this series, the story keeps the listener engaged the characters are riveting, this book is well worth the money.

Loved all his books so far. You need to read all the Hellequin Chronicles first to really understand the full story. This series keeps the story and entertainment going.

Book two of what appears to be a 3 book series in McHugh's Avalon world. Really enjoyed this one as the characters grow and the story allows for more richer storytelling. Having read all the Helliquin books I have no problem following the story or understanding who the characters are. For good or bad, the pace of these books have been much quicker. If you have not ready these books I highly recommend them as this trilogy follows some of the characters and is set in the same world.

Totaly unbelivable use of power from mc

Could not finish this book, simply because the silly ways she is not able to use her metal powers sometimes while at other times it is just easy.
She can pull a metal boat a long way but not other small items. Despite the book saying she has practiced she seems totaly inexperienced and unprepared. She is not wearing any metal items or have something with her, but needs to find it around her. In the first book she allegedly studied metallurgy, but only seems to think metal is metal.
Overall the writer has not managed to come up with some balance of her power, and ends up making it hard sometimed and easy other times. The training she has done must be the worst in the world, because she seems totally unprepared for anything except hand to hand combat. However it the series has a good concept, but is obviously not well written.

i love the series can't wait to start the next book in this awesome series.

Narrator has a good voice but can't pronounce common words much less the names of several characters.

The reader is fantastic is any ways, but she mispronounces a few names that tools some getting useful. Her Brooklyn accent isn’t great, but overall, she is very good. The story is wonderful.

Story great narrator terrible please change.
As much as I love the phrase bag of dicks it's used too much.

I'm unconvinced by the fact that these new characters are suddenly in control and giving the orders. The cameo performances of the big names from the previous series seem to be more as a reminder to 'keep reading because you're a Hellequin fan' than anything else. I am a Hellequin fan and I will keep listening but I really hope it gets better.

Enjoyed listening while driving around while working.

A good listen while driving. Only annoying thing was layahs bellyaching about her father it became very repetitive. If I had been reading I would have been able to skip ahead. Other than that enjoyed it.

It''s been written terribly! the author rehashes the same thing pretty much over and over again and uses weird ways of describing anger! The main character is constantly feeling 'anger bubble to the surface' or something along those lines. though written poorly, the reading of the book is quite good and the redeeming feature of this audiobook is that the world its based in is pretty interesting and the story though clichéd and predictable as hell is fairly enjoyable! if you like this kind of genre than you might enjoy listening to it but I don't think anyone could possibly enjoy reading it unless they're maybe under the age of 10.


The narrators breathy, whisper tone is deeply annoying . The hellequin narrator (although male) was far better and carried off the female roles brilliantly. Current narrator makes it extremely hard to listen to and enjoy. Otherwise, a good story.

The story and character's are developing and the story is drawing you in. Everything is coming to a head and you can see how the series are going to converge into one new super series.

Great story and narration cannot wait for more in the series. So happy Remy has found his potty mouth again !

Much as I hate to say it I am not impressed by these stories so far. Can't wait for Nate's return.

A Flicker of Steel

Once again an outstanding book, beautifully written and with a wonderful narrator. Thank you Mr. McHugh I adore your characters, Remy I may be a little (perversely) in love with! Leah has matured into a real kickass female in a book full of kickass females. Thank you for that! Truly cannot wait for the next book and the next Chronicles after the Avalon trilogy.
Outstanding!!!

This series so far has been very different from anything else I have listened to in that it has all the usual beasts and monsters many of us are familiar with such as werewolves, the odd vampire, dwarfs and mythical gods and new beings entirely but in this book they are nothing like other series and for this they help make up a really interesting and enjoyable story. I can’t wait for the next book in this series and I have already preordered the kindle edition though I am hoping the Audible version will be released at the same time using the same narrator who does a fantastic job individualising characters and enhancing the story. I highly recommended this book series 🐨

Over a short amount of time, I powered through Mr McHugh's the last three books of Hellequin Chronicles and then straight on to the first book of The Avalon Chronicles. After reading A Glimmer of Hope and seeing that the second book was up for pre-order, I was extremely excited.

So I have finished A Flicker of Steel, and now want to read the next one... but I have to wait until November...

I guess I should start with this review. Where was I? Oh yes, A Flicker of Steel. FoS expanded a lot from the last one, it been two years since the previous book and is set after Scorched Shadows (So now I understand the timeline), we pick up with Layla as a full-time agent. As this expands what happened after the takeover (if you want to know more read Hellequin Chronicles) and catch up Tommy, Oliva, Cassy, Chloe and Harry.

Seeing how they have grown and have been dealing with this new status quo and how they all need desperately need a win. There is not much I can say about this book without spoiling the heck of it.

The growth of Layla from the first book to the end of this one was marvellous to watch. In the first one, she thought she was a monster like her father, in this one she has accepted that darkness exists within herself, but you don't need to lose yourself.

The book is action-packed and fantastic.

And again my hat goes off to Elizabeth Knowelden's narration as it allows the humour, excitement, emotion and characters come to life. Her skill to give the listener/reader the full picture from her use different tones, accents and pitch. Miss Knowelden is brilliant and brings the level of the book beyond five stars!

Just like Mr McHugh has written so far, every book builds on the previous books and finally this book it connects to the larger storyline. Which make me want to read the next book!