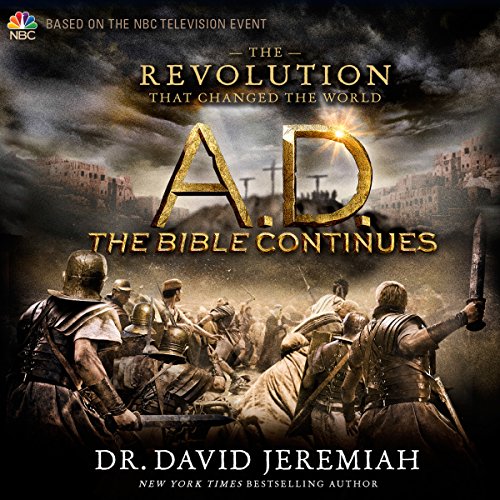 The greatest revolution of all time was about to begin.... When Pontius Pilate ordered the crucifixion of Jesus Christ, he thought he was putting an end to the Jewish uprising that had been threatening the authority of the Roman Empire. What Pilate didn't realize, however, was that the real revolution was just getting started.

Based on the epic NBC television event, A.D. The Bible Continues: The Revolution That Changed the World is a sweeping biblical narrative that brings the political intrigue, religious persecution, and emotional turmoil of the book of Acts to life in stunning, vibrant detail. Beginning with the crucifixion, New York Times best-selling author and Bible teacher Dr. David Jeremiah chronicles the tumultuous struggles of Christ's disciples following the resurrection. From the brutal stoning of Stephen and Saul's radical conversion to the unyielding persecution of Peter and the relentless wrath of the Jewish authorities, Dr. Jeremiah paints a magnificent portrait of the political and religious upheaval that led to the formation of the early Church.

Complete with helpful background information about the characters, culture, and traditions of the era, A.D. The Bible Continues: The Revolution That Changed the World is not only a riveting, action-packed audiobook but also an illuminating exploration of one of the most significant chapters in world history. Get ready to witness history unfold. The revolution has begun!

What listeners say about A.D. The Bible Continues

This book fills in and explains so much more!!

I watched the TV show. This fills in and explains so much more than TV!!

Well thought out and organized. Very insightful and moving. Narration was perfect and easy to understand.

I was a little hesitant about getting this book after watching the first 2 episodes of the miniseries. I was pleasantly surprised by how much I ended up enjoying the book. I will get the next one.

David Jeremiah is one of the best Bible teachers alive today.
I love Hearing him teach the Bible.

well done, The story, History of the first
Churches, easy to listen to.
Loved the reading and stoty.

Just did not hold my interest

Not nearly as good as his other books on the bible history. I had to keep starting over and the end just totally lost me.

Ours a good book, but does contain a lot of conjecture. I for one done usually assume a story line when there is no info to support it.