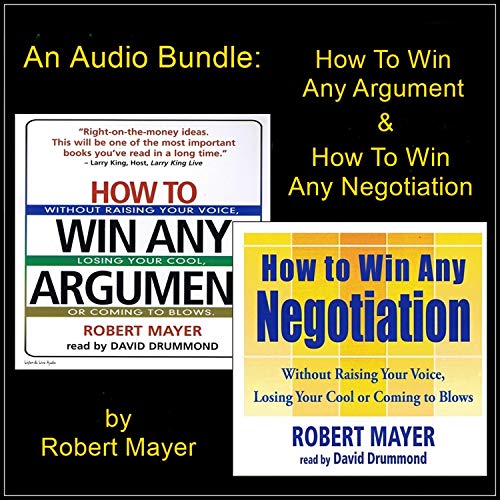 A bundle of two compelling audiobooks from author Robert Mayer.

The art of argument. It's mysterious and powerful. It's the art of having things go your way. But also it's the art of getting out of your own way. It's having The Moves. But it's also about having The Touch. Arguing. There's the rough and tumble of the norm, the amateur's game. Then there's the pro's game - always knowing what to say, how to say it, and when to say it. Winning arguments without quarreling, squabbling, tussling, wrangling, bickering, raising your voice, losing your cool, or coming to blows.

Today's super negotiator has to be a versatile problem solver, seeking hard-bargain results with a soft touch. With punch and panache, Mayer shows you how to make the grade, revealing powerful negotiating tools drawn from a unique blend of sources, including recent advances in psychology, linguistics, trial advocacy, sales, and management communications - the cutting edge of the art of performance; Tips, tricks, and techniques from 200 of the world's masters - the legendary street and bazaar merchants of Bombay, Istanbul, Cairo, and Shanghai; and Mayer's own "been there, done that" years as a lawyer representing thousands of clients (from foreign government agencies and mega-corporations to some of the world's best-known actors, authors, and athletes), negotiating deals on everything from amphitheaters to Zero aircraft.