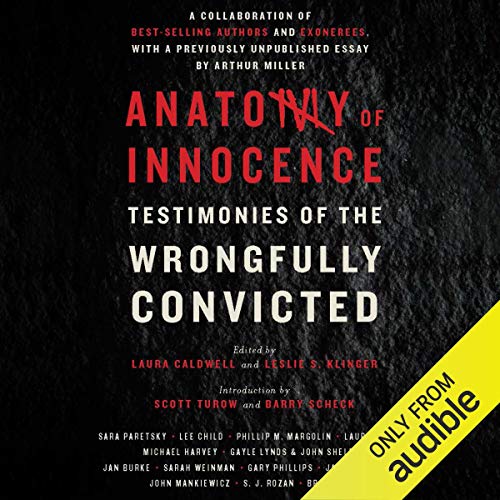 Recalling the great muckrakers of the past, an outraged team of America's best-selling writers unite to confront the disasters of wrongful convictions.

Wrongful convictions, long regarded as statistical anomalies in an otherwise sound justice system, now appear with frightening regularity. But few people understand just how or why they happen and, more important, the immeasurable consequences that often haunt the lucky few who are acquitted years after they are proven innocent.

Now, in this groundbreaking anthology, 14 exonerated inmates narrate their stories to a roster of high-profile mystery and thriller writers - including Lee Child, Sara Paretsky, Laurie R. King, Jan Burke, and SJ Rozan - while another exoneree's case is explored in a previously unpublished essay by legendary playwright Arthur Miller. An astonishing and unique collaboration, these testimonies bear witness to the incredible stories of innocent men and women who were convicted of serious crimes and cast into the maw of a vast and deeply flawed American criminal justice system before eventually, and miraculously, being exonerated.

Introduced by best-selling authors Scott Turow and Barry Scheck, these master storytellers capture the tragedy of wrongful convictions as never before and challenge listeners to confront the limitations and harsh realities of the American criminal justice system. Lee Child tells of Kirk Bloodsworth, who obsessively read about the burgeoning field of DNA testing, cautiously hoping that it held the key to his acquittal - until he eventually became the first person to be exonerated from death row based on DNA evidence. Judge John Sheldon and author Gayle Lynds team up to share Audrey Edmunds' experience raising her children long distance from her prison cell. And exoneree Gloria Killian recounts to SJ Rozan her journey from that fateful "knock on the door" and the initial shock of accusation to the scars she carries today.

Together, the powerful stories collected within Anatomy of Innocence detail every aspect of the experience of wrongful conviction as well as the remarkable depths of endurance sustained by each exoneree who never lost hope.

What listeners say about Anatomy of Innocence

Compelling horrific accounts of wrongfully convicted innocent and ultimately exonerated men and women, who spent years, sometimes decades, behind bars. You will never have complete confidence in our judicial system after listening to these stories.

This piece was jaw dropping. We are supposed to trust the "system", but several of these exonerated souls we're locked up due to the systems corruption. I found myself hanging on every word. The stories of the freed men and women were chilling. I would have given this read five stars just based on them, however after each chapter, there was quite a lengthy dedication and bio on the author of each piece. I felt it took away from the exonerated. I was here to listen to them, not read about all the wonderful things the writer experienced in thier privileged carreer.

Amazing, well performed, great compilation of real life stories. One feel hope for the future of humanity when one see the hard work all these people do to help and preserve justice. Thank you.

Emotionally inspirational to never give up!

lots of voices. many different takes on explaining the innocents blight. Multiple amazing Shorter stories. Gives you a new look on these People.