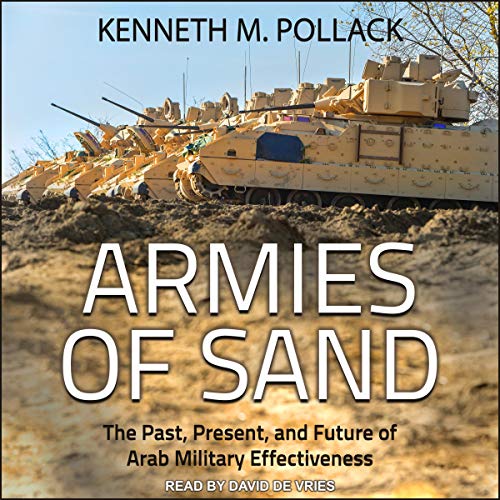 Since the Second World War, Arab armed forces have consistently punched below their weight. They have lost many wars that by all rights they should have won, and in their best performances only ever achieved quite modest accomplishments. Over time, soldiers, scholars, and military experts have offered various explanations for this pattern. Reliance on Soviet military methods, the poor civil-military relations of the Arab world, the underdevelopment of the Arab states, and patterns of behavior derived from the wider Arab culture, have all been suggested as the ultimate source of Arab military difficulties.

Armies of Sand, Kenneth M. Pollack's powerful and riveting history of Arab armies from the end of World War Two to the present, assesses these differing explanations and isolates the most important causes. Over the course of the book, he examines the combat performance of 15 Arab armies and air forces in virtually every Middle Eastern war, from the Jordanians and Syrians in 1948 to Hizballah in 2006 and the Iraqis and ISIS in 2014-2017. He then compares these experiences to the performance of the Argentine, Chadian, Chinese, Cuban, North Korean, and South Vietnamese armed forces in their own combat operations during the 20th century.

What listeners say about Armies of Sand

This is an excellent and most scholarly work by Mr. Pollack and wonderfully narrated by David de Vries.

At first, I wondered if I hadn't chosen this book in error as I initially thought (in the first few minutes) perhaps it wasn’t for me. Boy was I wrong! It very soon grew on me and I was shortly deeply immersed in this fascinating work.

Having previously read material on the six day war I had idly wondered how the Israel Defence Force could be so good as to have achieved such a victory in the face of overwhelming military odds (and conversely, why did the forces arrayed against them appear to fall apart when they seemingly had every possible advantage).

Well Kenneth M. Pollack not only explains what happened, but why, in a range of post WW II conflict areas, the combat performance of Arab armed forces is almost universally deficient.

In particular, how cultural imperatives, political interference in military appointments and decision making and a range of other factors operated to ensure that Arab armed forces were always being hamstrung.

Well worth the credit.

You Probably Already Know The Answer

Scholarly work in which the author provides the support for an answer you probably already knew. First half of the book the author debunks the other issues in order to explore the real issue for Arab military mediocrity.

I'd recommend this for anyone who'd like to know about military science and/or why the middle east is the way it is. The account goes into very convoluted subjects that are usually only understood by a few wizards and manages to be clear and concise. One will even learn about many recent wars.

I do not give the author a perfect score because while I learned many things in his brief accounts of many conflicts, I was already expert on others and saw some major oversimplifications involved (for instance, he subscribes to the myth there was a "winner" of the 2008 Israel-Hezbollah War).

Also, some of the things he said about Arab-Israeli Wars were unnecessarily opinionated. He also had no concept of naming conventions whether neutral or partial and proceeded to use pejoratives unnecessarily. Namely, he doesn't know what the definition terrorism is, bit that is also par for the course. He also refers to the West Bank as Judea&Samaria, and refers to the Palmach as a terror group.

I do not give the reader a perfect score because he sometimes mispronounces local names in bizarre ways. For instance, he pronounces Amir as what sounds like Armsh.

The insight I gained about Arab culture and its knock on effects on organizational performance was indispensable. The battlefield descriptions however left plenty to be desired and only served to water down the social significance of the good content in this book.

This book does a great job of compiling and synthesizing the information that many western militaries believe hinder the Middle East from becoming a 21st-century military power. Highly recommended for anyone working in the Middle East.

Although the book explicitly covers military "achievements" of the Arabs armies, it is also a good starter for anyone willing to learn more about Arab culture and mentality. It sounds more like a typical academic paper than a historical book, you have to get used to it. I highly recommended this book for anyone working with Arabic personnel.