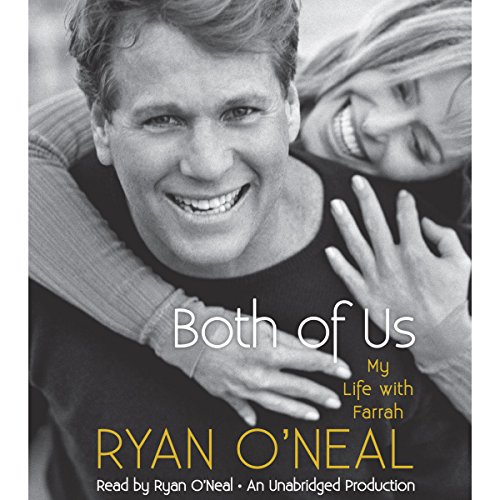 Ryan O’Neal and Farrah Fawcett: He was the handsome Academy Award-nominated star of Paper Moon and the classic romance Love Story. She was the beautiful, all-American Charlie’s Angel, whose poster adorned the bedroom walls of teenage boys everywhere. One of the most storied love affairs in Hollywood history, their romance has captivated fans and media alike for more than three decades. In a tragic turn, the world lost Farrah after a tragic battle with cancer in 2009, but in his intimate memoir Both of Us, Ryan brings their relationship to vivid life.

Fans of each other from afar, Ryan and Farrah met through her husband, Lee Majors, and fell passionately in love. Soon, however, reality threatened their happiness and they struggled with some serious matters, including the disintegration of Farrah’s marriage; Ryan’s troubled relationship with his daughter, Tatum, and son, Griffin; mismatched career trajectories; and raising their young son, Redmond - all leading Ryan and Farrah to an inevitable split in 1997.

Ryan fought to create a life on his own but never stopped longing for Farrah. Eventually he realized that he had lost his true soul mate. Older and wiser, he and Farrah found their way back to each other and were excited to start a new life together. But their bliss was cut short when Farrah was diagnosed with cancer and passed away just three years later.

Ryan’s deep love for Farrah and his devotion to preserving her memory are evident in Both of Us. Drawing on decades’ worth of personal records and keepsakes, he has included never-before-seen photographs, letters exchanged between him and Farrah, and his own diaries, making this a poignant and compelling memento for her fans. Written with candor and emotional honesty, it is a true Hollywood love story.

Where does Both of Us rank among all the audiobooks you???ve listened to so far?

It's a nice story. I'm 55 from Southern California so I remember these days well. But I don't care for Ryans reading. He stammers, halts, has pauses when he shouldnt and sounds like he's reading something he's never read before.

Who would you have cast as narrator instead of Ryan O'Neal?

Not really sure. It's always best it seems to have the writer read his own words but in this case I disagree.

Yes. Ryan is obviously living a life of regret. And to that I can relate.

I don't mean any offense to Mr O'Neal, just didn't care for his reading.

What made the experience of listening to Both of Us the most enjoyable?

Gives a good and honest view of life of Ryan O'Neal

The end of the life of Farah

Would you consider the audio edition of Both of Us to be better than the print version?

Yes, because you get the author's intended emotions from the voice version. But, I found Ryan's way of reading to be somewhat distracting, as he pauses at the stangest times in sentences. Other than that I did like the story.

Farrah, because I learned things about her that made her more of a down to earth person.

Did Ryan O'Neal do a good job differentiating all the characters? How?

He stayed within one voice all the time, but he used the correct references to tell you who said what.

The Rocky Love Story of Fame

He told a story of love and the pain fame can bring. He also told about his inability to be a good parent because of his own narcissistic drive. If you didn't like Tatum O'Neal before this book, you certainly won't like her now. Tatum and Ryan certainly are child and parent.

I found this book incredibly moving, largely due to Ryan O'Neal's narration.
Often having to fight back being overwhelmed with emotion as he speaks candidly about his life. I am glad he has taken the time to write this, there is so much negative information about him as father out there. He never shy's away about taking culpability for his children's problems, and is frank about his failure as a partner to the various women in his life. Here is man who is desperate to go back and relive moments of his life to do them differently, and has come to the realisation that no one gets a make over or do again in their life. I think his children are now grown up adults and should take responsibility for their life,
and stop blaming 'Daddy'. Even with all the money in the world for the best rehab's that money can buy could not combat the evil that is drug addition. I was ambivalent about this man, but was so moved by this book. At the end of the day he is human being trying to do the best that he can to live his life. I wish him well with his own struggle with illness.

This book deeply affected me. I am a cancer survivor so my perspective comes from that place. It is beyond a love story. it is a soul mate story from Ryan's perspective. Although I am sure Ryan left out most of his less than appealing moments, he included enough to get the drift of his struggles. The one thing that was and still is clear, he was madly, deeply, in love with Farrah and she with him. They went through Farrah's cancer much differently than many us who have struggled. They did not have the financial burden and that is evident in the story. Because of that, all focus and thought was on Farrah, and the ability to go anywhere at any price to save her life. He also has an interesting way with words, like each sentence is taken from a romance novel or stage play. Wherever his poetic elegance comes from, he tells the story of his love for Farrah. This is not a story of Farrah's struggle with cancer. Although it is very much a part of the story, it's from the perspective of a man deeply in love with a woman, and his inevitable knowledge that he is losing her and also the incredible struggle of addiction and its affect on the family. The story is deep, filled with happiness and sadness and everything in between. The story was so moving I'll forgive Ryan's awkward pauses throughout. I got the sense that his pauses were at places where he would have naturally ended the sentence but the book contained a few more words in those sentences that he would have to read. I give Ryan credibility in this book based on interviews with Alana Stewart, one of Farrah's best friends. She supported Ryan and believed his love for Farrah and because of that, I do as well. Thank you Ryan for touching my heart.
P.S- note to T.O. You won't get the time back but you still have today. Don't let the end be you talking to cold stone. Fix it now.

Have someone who knows how to read narrate this book!

If you’ve listened to books by the authors before, how does this one compare?

Who would you have cast as narrator instead of Ryan O'Neal?

Was Both of Us worth the listening time?

He glosses over so many events that the listener is not sure what's true. Addiction is a mental disease and one that is often hereditary. I can't believe that neither Ryan nor Farrah didn't have some issues surrounding drugs and/or alcohol.

I do not recommend this book.

It's all from Rayan O'Neals point of view, wish Farrah had writen something

Would you recommend Both of Us to your friends? Why or why not?

Could you see Both of Us being made into a movie or a TV series? Who should the stars be?

Easy reading one point of view,

Both inspiring and heartbreaking.

Strongly recommend this audio book. No matter what you think you know about Ryan O'Neal and Farrah Fawcett, it is really worth hearing Ryan O'Neal talk about their life together.

Fascinating autobiography, but very sad and a lot i didn’t know about. The love story was touching and moving but the dysfunctional family Ryan talked about at times made me cringe.