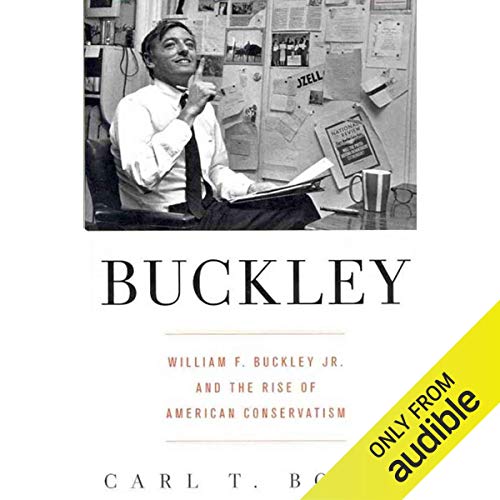 William F. Buckley, Jr., was the foremost architect of the conservative movement that swept the American political landscape from the 1960s to the early 2000s. When Buckley launched National Review, in 1955, conservatism was a beleaguered, fringe segment of the Republican Party. Three decades later Ronald Reagan - who credited National Review with shaping his beliefs - was in the White House. Buckley and his allies devised a new-model conservatism that replaced traditional ideals with a passionate belief in the free market, religious faith, and an aggressive stance on foreign policy.

Buckley was an eloquent writer and brilliant polemicist whose works are still required texts for conservatives. His TV show, Firing Line, and his campaign for mayor of New York City made him a celebrity; his wit and zest for combat made conservatism fun. But Buckley was far more than a controversialist. Deploying his uncommon charm, shrewdly building alliances, and refusing to compromise on core principles, he almost single-handedly transformed conservatism from a set of retrograde attitudes into a revolutionary force. Scholar Carl T. Bogus gives us the most authoritative biography ever published of this vital, larger-than-life figure.

What listeners say about Buckley

Unbalanced panoramic of conservatism - No Buckley

Only Liberals, Progressives and Leftists that are intellectually dishonest idealogues who demonstrate that they are incapable of tolerating diversity would like this book.

What could Carl T. Bogus have done to make this a more enjoyable book for you?

Instead of lampooning Buckley with ideological bias he could have stated the case from Buckley's side and then stated the case from his own bias view; and with that he could have showed how he was right. As it stands however, Mr. Bogus is simply advancing unsound ideology against a well respected man who has sadly passed. The content will only aid those on the left who want to follow as mind-numb robots regurgitating unsupported ideologic rhetoric.

Would you be willing to try another one of Mark Ashby’s performances?

What character would you cut from Buckley?

Great coverage of Buckley and the conservative mov

I got alot of listening to this audiobook. The narrator was excellent. I learned about the early conservative movement and history of the movement.

The name would suggest that Buckley would be a bit more featured. The book veers off into basic history lessons at times. It starts strong but I found myself fast forwarding through chunks of it.

A “Liberal” writing about a “Conservative”.

A very well written book and the narrator, Mark Ashbery, did an outstanding audio presentation. In Mr. Bogus’ introduction he declares himself a “Liberal” writing about a “Conservative”. I almost stopped listening, but between the narrator and the content I continued and for the most part enjoyed the book. This was not a biograph of WFB but an overview and historical discussion of conservatism in America from the late 1800’s thru WFB lifetime. The author made the point that WFB changed American “Conservatism” and used numerous discussions and examples. It was good and the author did a good job trying to present conservative facts with a narrative flare. Toward the end “Liberal” bias may have slipped in ever so slightly but all in all in my opinion it gave a very readable historical travel guide of American “Conservative” movement. Experienced as an Audio book.

I Expected a Buckley Biography

The publisher's summary is where it all began. I usually read a few reviews before buying, but in this case I made the mistake of purchasing the book based on the aforementioned summary alone, the gist of which was that they were offering a Buckley biography.
Knowing that Buckley, like the rest of us, was far from perfect, I was not expecting nor, in fact, would I be interested in reading, a hagiography. Neither however, did I expect an insufferable and unbalanced polemic. If this sort of thing tickles your ears, and you have a strong dislike for WF Buckley Jr., then "Buckley" is for you.

To anyone interested in conservative thought and history this book is both fascinating and essential reading.