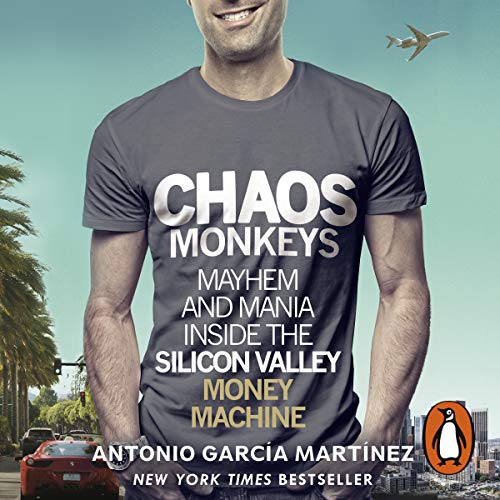 An adrenaline-fuelled exposé of life inside the tech bubble, Chaos Monkeys lays bare the secrets, power plays and lifestyle excesses of the visionaries, grunts, sociopaths, opportunists and money cowboys who are revolutionising our world. Written by startup CEO and industry provocateur Antonio García Martínez, this is Liar's Poker meets The Social Network.

Computer engineers use 'chaos monkey' software to wreak havoc and test system robustness. Similarly, tech entrepreneurs like Antonio García Martínez are society's chaos monkeys - their innovations disrupt every aspect of our lives, from transportation (Uber) and holidays (Airbnb) to television (Netflix) and dating (Tinder) - all in search of the perfect business miracle.

Describing himself as 'high strung, fast talking, and wired on a combination of caffeine, fear, and greed at all times', García Martínez left Wall Street to make his fortune in Silicon Valley, becoming CEO of his own start-up before bailing and being poached by Facebook's nascent advertising team. Here he turned users' data into profit for COO Sheryl Sandberg and chairman and CEO Mark 'Zuck' Zuckerberg.

Forced out of Facebook in the wake of a bitter internal product war, García Martínez took his unique brand of entrepreneurial hyperactivity to rivals Twitter. Along the way he got into a lot of trouble with a lot of people, brewed illegal beer on the Facebook campus (accidentally flooding Zuckerberg's desk), lived on a yacht, raced sport cars on the highway, and enthusiastically pursued the lifestyle of an overpaid Silicon Valley mercenary.

In Chaos Monkeys he tells you how - and how not - to make a fortune through start-ups and digital marketing. Highly entertaining and always offering genuine insight, García Martínez unravels the chaotic evolution of social media and online marketing. From start-ups and credit derivatives to Big Brother and data tracking, social media monetisation and digital 'privacy', he shares both his scathing observations and outrageous antics, taking us on a subversive and very funny tour of the fascinatingly insular and unbelievably wealthy tech industry.

What listeners say about Chaos Monkeys

I absolutely loved this, I listened to it every single hour of the days that past by, not caring for my other daily listening and podcasts.

Superbly broken down the world of digital advertising and the machinations of Silicon Valley. A great journey too.

I wish I knew before Ilistened

Author is doing over-exaggerated character of himself... Don't take everything to literally - you'll enjoy the book more. Or listen second to last section first where author explains his character.

I could barely listen to some of the chapters due to amount of douchebaggery... knowing what I know now would've helped to enjoy the book more....

Perfomance was very much on the spot - pompous misogynistic prick(I really hope author was doing a character)...

Bludgeons your SV illusions with a stick.

This book really was a brutally honest look into silicon valleys workings and the mind of one man: Antonio Garcia Martinez.

Chronicling his life from Wall St analyst with Goldman Sachs to Facebook product manager and office antagonist; Chaos Monkeys hooks you immediately like Mike Tyson in round one at Madison Square Garden (really f'ing hard!).

Not for the faint of heart or special snowflake this book not only takes a sharp look at life in Silicon Valley at tech giants like Google, Twitter & Facebook but also, the sordid nepotism & sexual deviancy that occurs behind these companies closed doors.

Ultimately, it appears an honest and cutting portrayal of that life and Antonio pulls no punches even when talking of himself. I'd recommend this to anyone who's ever wanted to work on SV or any budding entrepreneur looking to get a sense of the harsh realities that await you post starting a tech company.

All this is weaved withing a narrative that finds Antonio destroying Mark Zuckerbergs desk with home brewed beer, hooking up in closets with hot coworkers and having screaming matches with Chris Sacca via phone.

It will make you laugh out loud as well as cringe and cheer for Antonio who can only at times be described as the lovable asshole and protagonist of what is a well written and well read story of playing it fast and loose in the valley.

Great read. Very entertaining as well as very insightful. Heard about it on the TWIST show and immediately bought it. The author has a great writing style.

If you really liked liars' poker you'll also like this otherwise it'll come across as quite shallow...

Just finished listening for the second time and already know I will listen again in the future. this book is a must read for anyone who is even remotely interested in tech, silicon valley, or any of the big tech companies residing there. the foot notes alone could while an hour away. very informative and at times even laugh out loud funny. Cliché I know but this really should be a movie.

too slow and seems like it's more to feed the ego of the writer. not much happens at all.

Self indulgent and too long

Intermittently both interesting and amusing, this book is unfortunately around 4-5 hours too long and very self-indulgent.

at the beginning it was interesting, but then it becomes like listening to a self-absorbed and slightly drugged executive in a pub, droning about their accomplishments and always portraying themselves as the hero who saves the day.

This book set a wild fire inside me.

Antonio's narrative with his unadulterated truth resonates with anyone working on the high end tech of the startup environment.

I finished the book and am going to go through it again. Don't want to miss a thing.

This is not only an incredible current account of the tech scene in Silicon Valley. It's full with snippets of marketing wisdom for success in the golden age of social networking, where product and brand perception is paramount.

Read it as a story, don't take it seriously as some sort of industry guide.

liked this a lot, gives a good and amusing insight into the crazy world of tech start-ups. The author adopts a persona, which adds to the story pretty well.

The modern puritans at Apple that got the author fired from his new job at Apple must not have read beyond the first few chapters. They could have found many more excuses if they'd read further. The book is an entertaining no BS insight into the startup process in silicon valley.

just a story about his chaotic life

very well narrated, which makes me able to finish the whole book; but the content is very thin. mainly just about his chaotic life, with an emphasis on his time in Facebook. does give a bit of insight into how he work in Facebook, but nothing else. if you got nothing else to read, then go on read this one. otherwise, better read/listen to the other books first.

If the author was not so verbose the story would only have been 1/3 as long. You could sometimes get lost in his descriptions of things but under all that it was really insightful and particularly useful if you have an interest in ad exchanges.

Having spent most of my working life in tech, and time in San Francisco, this book was right on point and thoroughly entertaining.

A very insightful and most of all entertaining read that is a must for all startup entrepreneurs and pretty much anyone in the tech or VC business. A supremely entertaining writing style and brilliantly read. Kudos A.G.M

Great pace and use of language. Really enjoyed the perspective of Silicon Valley and the various characters.

Fascinating, gripping and a book that I’ve been talking about but prefixing it with “I’m not recommending it”

It’s an excellent summary of ad tech circa 2013. An interesting insight in to Silicon Valley and ultimately a book by an author who unironically represents himself in all his folly. It’s the most interesting book that I will never recommend, because I fear the recommendation will reflect some tacit endorsement of the authors behaviour and attitudes.

Good story for a techie, bad example for a family

Very open account of tech life. Bloke has a vendetta and is poor dad.

Garcia Martinez relates a lot of inner sanctum workings of Silicon Valley and IT companies in general, including Facebook, Google and others. He explains how Social Media works, and funnels, how computers trace and track our every single keystroke, how you can read an article about running shoes on one website on your phone then you log into Facebook and start seeing ads for that same shoe, and you get emails advertising half-price sales of those shoes etc.. If you've ever thought there's a bit of Big Brother shenanigans happening there, you've no idea the enormity of the intrusion. He also explains how he created Cookies, what they are, how they track your movements, and why they're such a valuable asset to advertisers and a commodity in SM. At times it got so deep in detail that it lost me, or I foundered in my understanding. I just kept going and eventually rejoin the story. Interesting and worthwhile reading.

A must read for anyone who buys digital advertising

As a social media manager this book was entertaining and informative and I would definitely recommend it to anyone who wants to read a business book that true as it is sounds like a fiction novel.

We need to hear more stories from this era. Great read for startup entrepreneurs. Cheers