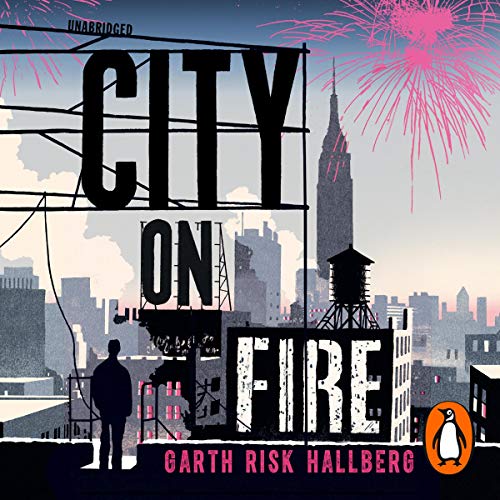 It’s New Year’s Eve, 1976, and New York is a city on the edge. As midnight approaches, a blizzard sets in - and amidst the fireworks, an unmistakable sound rings out across Central Park. Gunshots. Two of them.

The search for the shooter will bring together a rich cast of New Yorkers. From the reluctant heirs to one of the city's greatest fortunes to a couple of Long Island kids drawn to the punk scene downtown. From the newly arrived and enchanted to those so sick of the city they want to burn it to the ground.

All these lives are connected to one another - and to the life that still clings to that body in the park. Whether they know it or not, they are bound up in the same story - a story where history and revolution, love and art, crime and conspiracy are all packed into a single shell, ready to explode.

What listeners say about City on Fire

It reflects the seventies

Did the narrators do a good job differentiating each of the characters? How?

The narrator's voice becomes boring over a long book.

A New York state of mind


A monumental book about a great city, at a crossroads of time and social upheaval. the story's main part of the plot develops around the 1976 july 4th bicentennial year and culminates on july 1977 with the blackout of of the five barrows. this is a time when the bronx looked like bombed city, central park was a dangerous place, the subway were one moving homage to graffiti, needle parks and sexual cruising were part of urban life , all this things were as common as racial divisions and social inequality. You could feel the electricity building, the danger lurking every time you walked the streets, it was also exciting, amazing, and you could never get enough of that pulse, that beat that this city had on those years a lifetime away now.

The novel captures all this elements and creates some brilliant characterizations that sparkle of the page and make you forget about plot. The language, the use of language is rich and beautiful, a work with reverence for words an author that loves to make them sparkle like the jewels they are and gives hundreds of pages of this particular delight.

Yes it is long, yes it could have been shorter, but it would not have the eloquence and beauty it deserves, this book is not about plot but time and place and the people that inhabit that space, it a congregation a serendipity of events that find a way to a gorgeous finale that deserves every page it takes to get there.

mesmerising work that spans the 70s. Risk Hallberg is brilliant. great audio book too, well read and we'll produced. definitely recommend if you're looking for a deep but accessible story.

It might be me but I really struggled with this story. possibly I wasn't able to concentrate on it enough during my daily commute but the charectors at times merged into each other. The language was flowery and seemed to try to hard to be clever. It was slow and never suprised me. It's a few hours of my life that I won't get back.

Even better second time round

I read this book when it first came out a few years ago and lives it at the time. During lockdown Ive become obsessed with audio books and decided to listen to City on Fire. I literally couldn't wait to put my earplugs in and it certainly made chores and lockdown much more bearable! Fabulous characters, and great story line.

not as engaging as I'd hoped

couldn't finish this, the changing format is a difficult one to tackle in audio form, but i didn't finish the hardcopy either. it just fell flat for me. and thats a lot of audio book to fall flat!

Garth Risk Hallberg has achieved with his first novel what any literary author strives to achieve in their lifetime. 'City On Fire' is not so much a book with a centralized plot as it is (as it is novelistically intended) an experiential process. Where the reader might search for signposts pointing the way to the book's conclusion - hoping for closure and a satisfying fulfillment of the stories they've been exposed to - Hallberg offers them something that is really quite 'else'.
The novel meanders through time and a wide array of consciousnesses, depicted them in a myriad of ways and styles, urges the reader to forget that they are creations and rather accept them as interpretations of reality.
My only qualm with the audio rendition of Hallberg's work is that it cannot capture the visceral experience of the printed process. The book is layered with inserts and layout disruptions that my it a real visual treat. I was also a little frustrated by the voice given to Sam as I felt that it didn't capture the way I'd imagined her - this is a personal criticism rather than anything grander because that section is still very well read.
Regardless, this is an epic piece of writing that deserves your time (and it will require it). Hallberg has quite possibly written a true modern classic - and I say that on the grounds that I have enjoyed this more than I did Donna Tartt's 'The Goldfinch'.