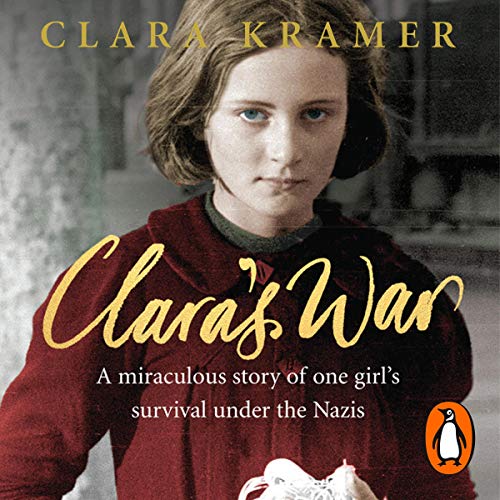 On 21 July 1942, the Nazis invaded Poland. In the small town of Zolkiew, life for Jewish 15-year-old Clara Kramer was never to be the same again. While those around her were either slaughtered or transported, Clara and her family hid perilously in a hand-dug cellar. Living above and protecting them were the Becks.

Mr Beck was a womaniser, a drunkard, and a self-professed anti-Semite, yet he risked his life throughout the war to keep his charges safe. Nevertheless, life with Mr Beck was far from predictable. From the house catching fire, to Beck’s affair with Clara’s cousin, to the nightly SS drinking sessions in the room just above, Clara’s War transports you into the dark, cramped bunker, and sits you next to the families as they hold their breath time and again.

Sixty years later, Clara Kramer has created a memoir that is lyrical, dramatic, and heartbreakingly compelling. Despite the worst of circumstances, this is a story full of hope and survival, courage and love.

What listeners say about Clara's War

It is hard to believe this is a true story. What people would go through to survive. I would recommend this to anyone that has an interest in world war 2. The narrator transports you back there. It was one of those book I did not want to stop listening to. Its books like this that make sure we don't forget our past.

the power of the human siprit

inspirational, what brave people, how can they be so forgiving? Again, we never learn from history

Beautifully read. Heart wrenching account of the the war and how the Jews suffered. Highly recommend.

Made me weep in the park

I loved it. It's the first book that's made me cry openly in public. Please buy it.

A first hand account of the life of a jewish girl hiding underground in Poland. The writing is almost 3D in its detail.

A book that can make you sigh, cry, be angry, and have hope. I the darkest places, roses can still grow.

The best book I have read on Audible. Inspirational true story. I wish everyone could read this book.

This is an amazing true story of ordinary people living in extraordinary times.
The triumph of the human spirit in the most difficult and testing circumstances never ceases to astound me.
Rula Lenska's voice captures the emotions so well.
Bought tears to my eyes.

and harrowing story about how people help People no matter what their religion or race is. The narrator was very good.

This book was very well written and read by Rula Lenska!
I couldn't stop listening to it!
I even replayed some parts of it as there was such a lot to take in and it felt disrespectful not to know for sure what was said!
I've read other good books on this subject and this book is up there with them...it was gripping, informative and heart wrenchingly honest!
Must be read to honour all those that suffered and those who died!

Sometimes you find a book that will stay with you for a long time. This is one of those books. Narration was wonderful and the true story very moving. I highly recommend.

I was moved to tears at many points in the book. The performance was outstanding. I recommend this book to everyone!

We loved listening to Clara’s War giving an insight into resilience off the utmost kind.

Nothing short of extraordinary, what Clara and her family endured . Well written account of Clara's experience of the holocaust. That any one survived this is mind boggling. So beautifully read .