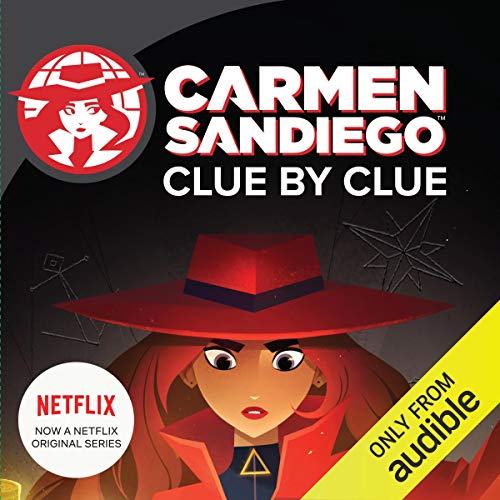 Carmen Sandiego and crew are off on a thrilling treasure hunt in this original story inspired by the Netflix animated series. When the secrets of a centuries-old treasure map are uncovered, it's up to Carmen to puzzle out the pirate's code and track down a long-lost treasure. From the cobblestone streets of London to a sunken city in the Caribbean, Carmen must stay one step ahead on a trail of clues in order to beat her nemeses to the buried treasure!

What listeners say about Clue by Clue: Carmen Sandiego

Carmen Sandiego is a great character and this story shows why. The narrator is engaging.

Great book for a road trip!

We listened to this on a road trip and it was a fast-paced book and included some history and geography, too! We loved this book and the narration.

It was just too short. I still want more!

It's still a good time, though.

The book is AMAZING the story line and the action is almost as if I was in the story watching it go on solving the mysteries before they were revealed.


I highly recommend you to buy this book.

I read the first book in this series and was eager for this one. I was not disappointed.
Great storyline and a great narrator to read it. I hope the third comes out soon!

It’s worth the price. Interesting but short and a little predictable. It also seems very juvenile, maybe I’m not the target audience but it seemed like the kids ran the show while the adults just stood my or messed things up.

Good read for the kids. Unlike the version that I grew up with years ago. Good story.

Carmen Sandiego does it again.

Another successfully solved case. Carmen and her team, solve the mystery of a female pirate in the Caribbean. In true Carmen fashion, Carmen teaches geography and history of the locations that she visits.