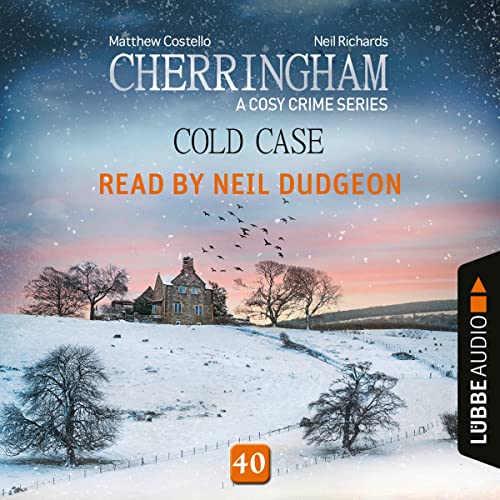 It's winter in Cherringham, and petty thief Charlie Topper's life is in danger. Desperate, he reaches out to Jack and Sarah for help: last summer - during a robbery - he witnessed a cold-blooded murder, and now he fears the killer is after him. Can Jack and Sarah solve this very cold case - before the desperate murderer comes for them too?

Set in the sleepy English village of Cherringham, the detective series brings together an unlikely sleuthing duo: English web designer Sarah and American ex-cop Jack. Thrilling and deadly - but with a spot of tea - it's like Rosamunde Pilcher meets Inspector Barnaby. Each of the self-contained episodes is a quick read for the morning commute, while waiting for the doctor, or when curling up with a hot cuppa.

Co-authors Neil Richards (based in the UK) and Matthew Costello (based in the US), have been writing together since the mid-90s, creating content and working on projects for the BBC, Disney Channel, Sony, ABC, Eidos, and Nintendo to name but a few. Their transatlantic collaboration has underpinned scores of TV drama scripts, computer games, radio shows, and the best-selling mystery series Cherringham. Their latest series project is called Mydworth Mysteries.

The narrator of the audiobook, Neil Dudgeon, has been in many British television programmes including the roles of "DCI John Barnaby" in Midsomer Murders and "Jim Riley" in The Life of Riley. He is also known for his film roles in The Nativity, Sorted and Son of Rambow. In 2012 Dudgeon starred as "Norman Birkett" on BBC Radio 4's Afternoon Play series written by Caroline and David Stafford.

What listeners say about Cold Case

Twice now, the producer of this series seems to have forgotten the meaning of the word "chapter." The story is annoyingly broken into a 4-8 minute "chapters" that don't actually match with the story chapters, making it impossible to set the timer to "end of chapter." Sometimes it actually stops in the middle of a sentence. This poor production also makes it hard to find your way back to a chapter you might want to read again because you have no hope of ever actually finding it. This was so annoying I eventually gave up on the story and am not confident that I will want to continue this series.

Worse, it's the second time they've done this. Complained it about last time, but they just did it again. I doesn't feel like the producers of this series actually like their readers anymore and are doing all they can to just crank it out and make a buck. Too bad. This was a great series.

I wish these were longer!

Loved this story, Neil Dudgeon is superb as narrator. I'm going to listen to the whole series over again!

Jack and Sarah are at it again. Trying to figure out who killed a man and the case had grown cold. And besides the killer there were so many people who were guilty of something else. It was very odd this time.

No romance and no swearing to speak of.

As for the narration: I've loved Neil Dudgeon in every one of the 40 books I've listened to. Especially Jack's voice.

These great mysteries with the wonderful characters and perfect setting are definitely my favorites! Narrated by Neil Dudgeon, the well written stories are a delight to listen to, and I’ll always be looking forward to each new adventure!

As usual I sincerely liked the Cherringham mystery. A good clean cliff hanger with my favorite narrator. This is always a very good story with a surprise ending.

Can’t wait to get the next book in the series! I only wish they could come along faster than they do.

As always a great mystery!

Another intriguing tale of murder and intrigue by a great author, and a superb narrator.

Not the best I've read but certainly entertaining...kept my interest . Hope others enjoy it.

One of the better in an excellent series. A well developed cliffhanger. Well done lads.

This is another fabulous addition to a wonderful and always interesting mystery series. From Neil's American accent, to each character, I delight in each story. I would say that this is my favorite episode so far but I haven't heard the next one yet.

I really enjoy this series, from the writing to the narration. This series would make an excellent TV series.
Looking forward to the next one.

Another fantastic murder mystery. Love listening to narrator. Puts great feeling and voices into the story.
I always look forward to the next book.

I love Cherringham and have listened to every book in the series. Very enjoyable as always. Neil Dudgeon always performs it brilliantly.

A definite favourite series that gets better and better. Suspense, mystery and humour, with perfect characters and superb narration.

All the intriguing twists and turns of a Cherringham murder mystery.
It’s so good that the familiar village characters have continued through all these stories under the wonderful narration of Neil Dudgeon. Yet, each can be enjoyed as a stand alone story.
Easy listening and really enjoyable as always.

Give it a miss

This is possibly the worst thing I've ever listened to. I cannot believe it took two people to write it. The plot is paper thin and if you cannot figure out who did it then perhaps the whodunit genre is not for you. My apologies to the author's if they are 12 years old. In that case, 'nice work boys. Keep on trying'. For all the grown ups looking for an entertaining mystery, give this one a miss

I absolutely love this book series! Neil Dudgeon is perfect as the narrator. I would love to see a TV show of Cherringham. I would cast Treat Williams as Jack and Miranda Raison as Sarah. I really like the chemistry between the characters. I would really like the books to be longer as I could happily listen to Neil talk for 7-8 hours. I can't believe there is 40 books. I have listened to all of them during COVID and I hope they keep going. NCIS has been going for 20 seasons with 22 episodes each. So I'm hoping there will be a lot more books! I would like to see some books with Sarah's children helping to solve some cases with them maybe going undercover. Maybe Dan discovers he wants to become a policeman or CSU? There are so many stories I would love to hear. I would love to hear a story where Jack's family come to England and Sarah and her family meet Jack's granddaughter and while visiting she is very much like her grandfather and sees something and wants to help solve the mystery.

Interesting story, quite a slow pace but kept my interest to the end and well read.

Another in a great series

Another good book in the series. Well read by Neil dudgeon. My only complaint, I wish there were longer as you settle down for a good listen and before you know its over. Very enjoyable series